For many COVID-19 vaccine opponents, no jab means no job 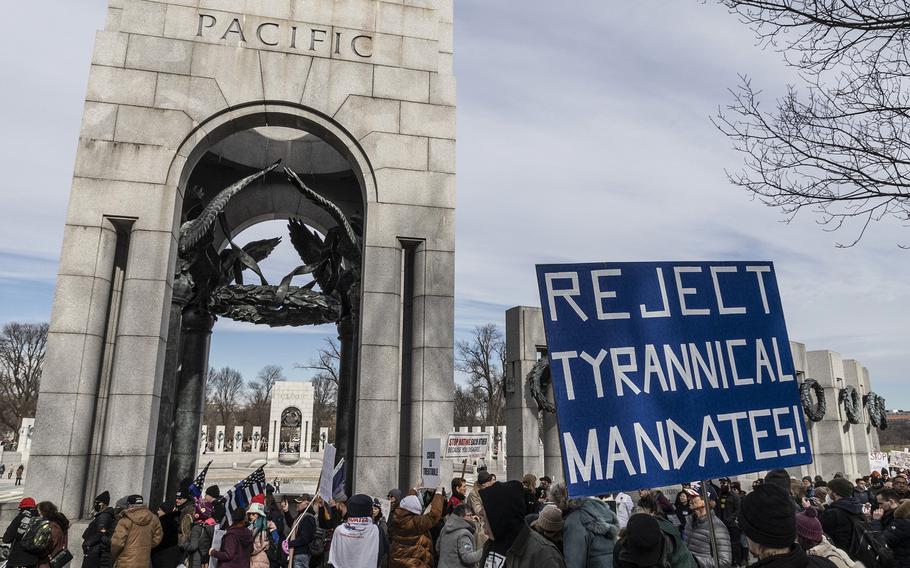 LOS ANGELES (Tribune News Service) — For eight years, Mike Miller has patrolled the grounds of the Snake River Correctional Institution, a medium-security prison in east Oregon. His $74,000 salary has paid for his home across the state line in Boise, Idaho, and allowed his family to home-school their three kids.

But next week, he’ll face his bosses at a “pre-dismissal hearing” for violating the terms of his job. Miller expects to be fired for refusing the COVID-19 vaccine.

“The vaccines probably do work for a lot of people,” said Miller, 38, a self-described born-again Christian who rejects the shots because cell lines derived from fetuses aborted decades ago were used in their development. “Our religious convictions tell us that abortion is wrong. We cannot use these vaccines.”

He added: “It would be easier to just get a shot. But I cannot stand for them forcing me.”

Even as the nation approaches the third year of the pandemic — with the Omicron variant breaking infection records and a growing death toll of more than 878,000 — a defiant 24% of the population has received no vaccine shots at all.

Facing court defeats, the Biden administration backed away this week from requiring large employers to mandate vaccines. So did Starbucks, which until recently was one of the largest U.S. companies to mandate its workers get vaccinated.

But in public sector jobs in blue states such as Oregon, and at dozens of major private corporations, mandates remain in place as leaders point to studies showing the effectiveness of vaccines in fighting off the worst infections. Lawsuits have been filed across the country as teachers, nurses, police and prison workers try to ward off what they see as unconstitutional overreach.

For Miller and millions of others, the anti-vaccine decision could cost them their jobs. He’s among a few workers in Oregon, including a state trooper and a school bus driver, who have sued the state over its vaccination rules.

In Texas and Alaska, governors are taking the Department of Defense to court over its vaccine mandate for the National Guard. In Illinois, teachers filed suit over policies requiring them to vaccinate or submit to regular testing. A case in Boston, where a man’s family said he was denied a heart transplant because he is unvaccinated, caused an uproar this week. Brigham and Women’s Hospital cited patient privacy in not commenting about the case, but said it was common medical practice to require vaccinations, including those for the flu and hepatitis B, for transplants to have the best chance at success.

In interviews, many in the movement against vaccines said they are not far-right radicals. Some are Democrats. Most say they lean libertarian. Their resistance has brought a nuanced complexity to the debate over individual freedom versus public good at a time when the pandemic has not only further exposed the nation’s political divides, but also has raised questions over risk and tolerance in an age when Americans feel increasingly vulnerable.

Vaccine opponents have been criticized — and sometimes mocked — for ignoring science and endangering the country’s health through a series of coronavirus surges. To many, they are irresponsible and selfish. But people like Miller, an iconoclast with a frontier pragmatism, see themselves as being forced to accept a vaccine that runs counter to their religious beliefs, distrust of pharmaceutical companies and their suspicions about scientific consensus. They believe it should be their choice alone to decide what goes into their bodies.

Miller’s application for a medical exemption from the vaccine mandate, based on him contracting COVID-19 last year and testing positive for antibodies, was denied. So was his request for a religious exemption, which the prison said he filed past deadline. Today, he is on paid home leave, he said, and required to be on-call even though he has no remote work to do.

“It’s ridiculous, as I am being paid for not working,” said Miller, who now is building a social media business and is running as a Republican to fill a seat in the state Legislature. Miller said it was the mandate that inspired him to run with a platform centered on what he calls “medical freedom.”

As top scientists declare that COVID-19 will be around for the long run, the movement against vaccines — once seen as fringe — has gained strength. Even among vaccinated Americans, just 40% have received booster shots. It comes at a time when the Omicron surge shows signs of easing and many across the country, especially the vaccinated, are revving, perhaps prematurely, to return to pre-pandemic lifestyles.

Thousands converged on Washington, D.C., this week to rally against mandates and question the science behind COVID-19 vaccines. The protest, organized by Defeat the Mandates: An American Homecoming, showcased the wide spectrum of those against vaccines, including conspiracy theorists who employed Holocaust imagery and antiabortion evangelicals who zeroed in on the use of cell lines derived from aborted fetuses in vaccine testing.

Monique Davy, an assistant high school principal in Brooklyn, N.Y., did not attend but said she shared the concerns of some demonstrators.

“This was rushed,” Davy said of the vaccines, which have been thoroughly tested and approved by the United States and other governments around the world. “The pharmaceutical companies are getting richer, and we will now have to have boosters forever, it seems.”

Davy, who made a six-figure salary at UFT Charter School, has been on unpaid leave since last fall, when her petition for a religious exemption was denied after the city mandated all school workers get vaccinated.

More liberal than conservative, she had voted for President Biden but questioned his administration and Democratic politicians for supporting mandates. Now living off savings, she has considered moving somewhere with more relaxed pandemic rules.

“I’ve been exposed to this virus like all front-line workers,” said Davy, who said she felt “more concerned about the vaccine than the actual virus.” Her husband, a teacher, is also on unpaid leave for refusing the jab.

“Now, here I am being mandated to do something?” Davy said. “Whatever happened, truly, to my body was my choice?”

On a recent afternoon, Davy walked through Atlantic Terminal Mall in Brooklyn. She could not dine inside restaurants because of vaccine checks. Next door was Barclays Center, where the Brooklyn Nets play. The team’s star point guard, Kyrie Irving, is unvaccinated. Because of the NBA’s COVID-19 protocols, Irving cannot play in home games but can travel and play in other U.S. cities.

“So the virus is just here in New York and not elsewhere?” Davy said. “He can’t play here, but can play in Dallas? It makes no sense.”

Such complications and the patchwork of local regulations on vaccination and protective health measures — including vaccine checks and masking rules — have frustrated pro- and anti-vaccine Americans alike.

Workplaces have treated exemptions differently, with some providing paid or unpaid leave to unvaccinated employees and others, including Nike and Columbia Sportswear, saying those who are not exempted from mandates will be fired. Some have put unvaccinated workers on test-to-work policies and asked them to mask up. Others have left unvaccinated parts of the workforce to stay remote indefinitely. Meanwhile, Facebook groups, social media accounts and paid services offering advice on how to gain exemptions have grown.

“You can really worship anything. As long as it’s a sincerely held belief, you can apply for a religious exemption,” said Sarina Forbes, a 63-year-old Seattle-based nurse who works remotely handling hospice intake for a large health company that she asked not be identified. She was granted an exception from her company’s rules based on her religious antiabortion beliefs.

Regarding vaccines, she added that she “did not want to be part of an experiment on humankind.” She had stocked at-home tests, wore masks in public and followed every other non-vaccine safety recommendation, she said. “I hate it when people say I’m a bad person for not vaccinating. I am not.”

Michelle Keaton, a training manager at the Los Alamos National Lab in New Mexico, said she first bought into vaccines — to a degree — before changing her mind.

“They showed some promise in the beginning. But then you look at data coming out, and people with vaccinations are also getting Omicron,” she said. Data that the Centers for Disease Control and Prevention released this week said that although “breakthrough” infections happen, the Pfizer and Moderna vaccines are 90% effective at keeping infected people from hospitalization.

“I am not saying it’s a scam,” said Keaton, who lives east of Albuquerque and whose position is largely remote. “I’m just not on the fence about it anymore. I’m looking at the fence.”

Keaton, 41, was among dozens who sued the lab, which works on science and engineering to support national security programs. Workers said that the medical and religious requests were not taken seriously and that there was a hostile work environment to the unvaccinated. A judge denied their request to block the lab’s mandate. They dropped the lawsuit late last year.

Keaton, who is on unpaid leave, is looking for new work. Without a CDC vaccine card, she says her prospects are thin.

“I’m hoping this Omicron wave will die down and these things won’t matter in a few months or that these mandates will just go away,” she said. “I have a master’s in organization, information and learning sciences, so I want the kind of job I am trained for.

“But you look at Starbucks, and they’re one of those companies finally relenting on vaccines. So I might just need to apply.”

In Idaho, Miller, the corrections worker, expects that he, too, will soon need to find another job. His pre-dismissal hearing is Feb. 4. Right now, he’s trying to build up a business where he curates social media accounts for local independent businesses. But after more than a decade working for prison systems, he’d rather keep his current job, though he has little hope.

“I want them to fire me,” he said recently. “I am not willing to quit. That is giving in.”

Kaleem reported from Los Angeles and Lee from New York.