Inside an ICU, a depleted staff struggles to keep going 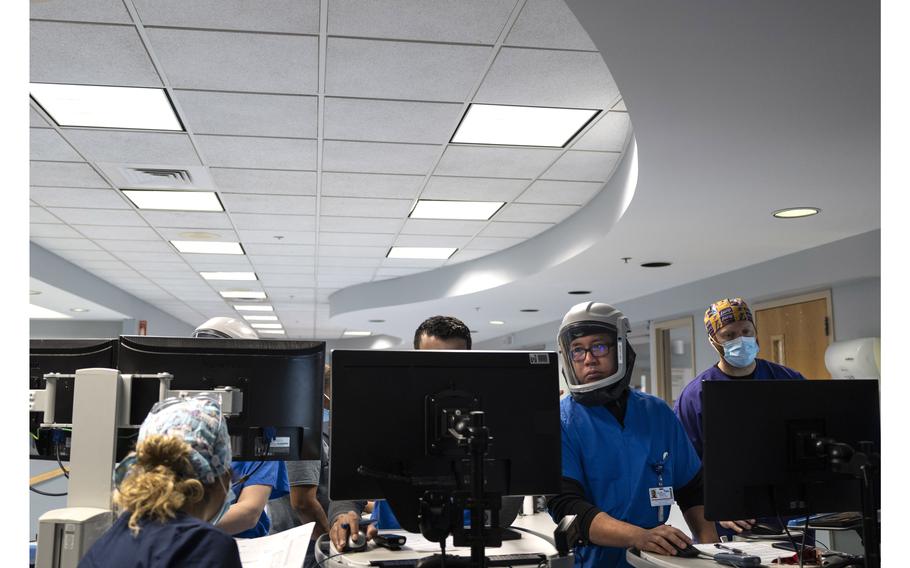 Angie Wheeler had bonded with her patient, and now his body was failing. The nurse tried not to let him see the concern in her eyes.

It was only the day before that he had told her about his job, his wife and children. Now, the intensive care unit’s head doctor told Wheeler, he needed to be placed on a ventilator. She donned her protective gear and headed in.

Nearly two years into the coronavirus pandemic, Wheeler, 65, knew what to say:

“You’re going to go to sleep, OK? You won’t remember any of this.”

“I’m trusting you to take care of me,” he told her.

Like hospitals across the country, Luminis Health Doctors Community Hospital is facing a two-pronged crisis in this surge, with thin staffing and more COVID-19 patients than ever before. Employees who remain have no choice but to shoulder bigger burdens. Among the heaviest, they say, is the emotional weight of so much preventable death.

About 70% of patients admitted to the hospital are unvaccinated, as are more than 90% of those who die there.

Doctors calling into a peer support line, created by Philadelphia-area psychiatrist Mona Masood at the beginning of the pandemic, now frequently lament the erosion of trust that misinformation about coronavirus vaccines has caused between patients and doctors, Masood said.

“This idea that we are all in this together,” she said, “has really broken down.”

During this surge, calls to the Physician Support Line have roughly doubled.

“Everyone in the hospital dealt with lack of PPE, a lack of testing, health care narratives rooted in political nonsense ... on top of all the death,” said Kanak Patel, the ICU doctor who told Wheeler that day that the patient needed to be intubated.

“You put any workforce through that,” he added, “and it’s not going to be whole. And we’re far from whole right now.”

When Wheeler turned 65, some of her family members urged her to retire, worried about her safety.

But she never considered quitting, even when the virus was new and she was often scared. Health care workers nationwide were leaving the profession in droves.

Last March, a Washington Post-Kaiser Family Foundation poll found that 3 in 10 health care workers were considering quitting. More than than half of those who remained were burned out, with 6 in 10 saying stress from the pandemic had harmed their mental health. And that was before the devastation brought by the delta and omicron variants.

Instead of quitting, though, Wheeler doubled down, picking up extra shifts to help with nursing shortages. It hasn’t been easy.

When she needs a break at work, she stares at the row of orchids that she cares for in a windowsill just outside the ICU, buoyed by the sight of their beauty. When she gets in her car at the end of days that stretch more than 13 hours, she turns off the radio and reflects, asking herself what went right, and if she could have done anything better.

She struggles with the mix of emotions she feels when she learns a patient is unvaccinated, frustrated by what it means for them and for the overburdened health care system. Still, as she has over the course of four decades in nursing, she has resolved to treat all her patients like she would family.

So she rushed to her patient’s room when she heard a “code blue” called in the hospital, two days after he was placed on a ventilator. He had died.

“I kind of feel like I failed him,” she said. 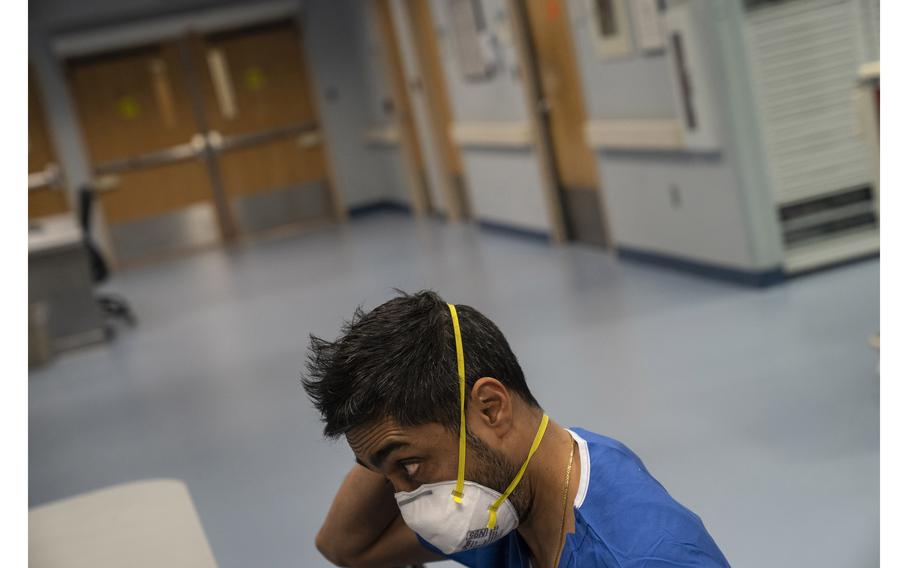 Deneen Richmond, the community hospital’s president, likens the rapid increase in patient volume the facility has seen to “an explosion.”

The number of COVID-19 patients that staff members at Doctors Community Hospital are seeing — from about eight a day before Thanksgiving to more than 80 — dwarfs the approximately 50 COVID-19 patients the hospital treated per day during the same period last January.

At the same time, about 20% of open positions are now unfilled, with a vacancy rate of 30% for bedside nurses. At points this month, as many as 60 staff members have been out sick.

The emergency room and main floor of the hospital have been hit harder in this wave, driven by the highly contagious but less severe omicron variant, than in previous ones. But the ICU, too, has remained busy. And the concentrated death that staff members continue to see worries Richmond.

“Obviously, people die in hospitals all the time,” she said. “But it’s been two years of seeing more death than probably most health care workers would have seen in their careers.”

The hospital took the unprecedented step in this surge of declaring a crisis.

Last year, it raised its minimum wage for all staff members to $17 per hour. It offered new benefits and brought in counselors and chaplains for emotional support. And, as hospitals nationwide have done, it hired dozens of agency nurses, who travel across the country and are typically paid higher salaries.

The number of patients being treated dipped in the past two weeks, mirroring state and national trends. Still, Richmond worries, especially when she thinks about the future. 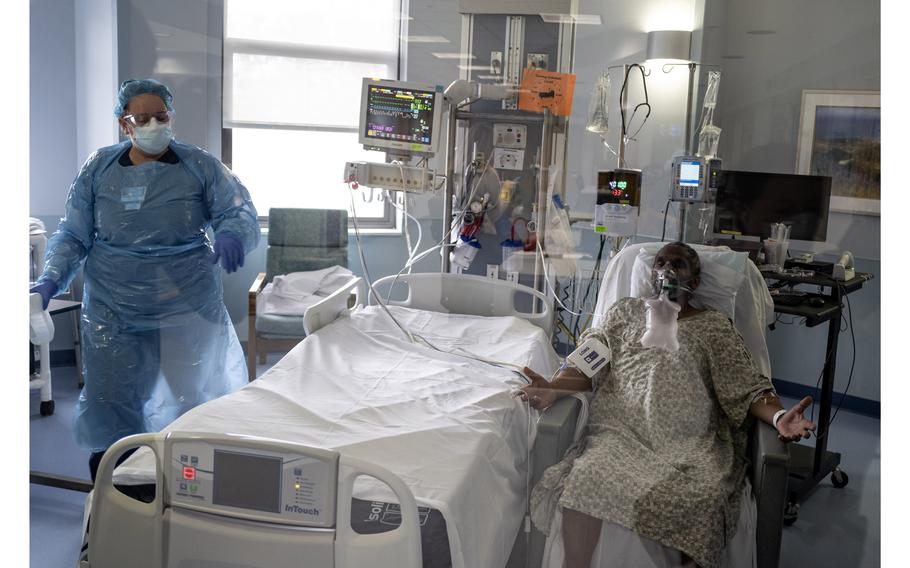 Steven Byrd, a covid-19 patient at Doctors Community Hospital, sits in a chair so his bedding can be changed. (Michael Robinson Chavez/The Washington Post)

As staff members completed their rounds on a recent morning in the ICU, doctors and nurses delivered updates in mostly flat tones. The news, for the most part, was grim.

One COVID-19 patient on a ventilator had nearly coded the day before. Another, whose teenage daughter had pleaded with staff members to do everything they could to help her dad get better, had basically lost all brain capacity.

“As much as I want to be able to fix him,” physician Bobby Mathew said, “I don’t think there’s a way.”

When they got to the window outside Steven Byrd’s room, the mood lightened. Patel, the director of critical care medicine, flashed him a peace sign. The chatty grandfather gave the doctors and nurse a huge wave.

“This is the greatest staff,” he shouted at them through the thick glass.

Staff smiled through their masks as they talked through the history of the unvaccinated man, who had made big progress - now eating and sitting up on his own — since he was admitted with COVID-19 the week before. Everyone was hoping for his success. The team needed a win.

Just seven months ago, they were celebrating multiple days with no COVID-19 patients, marveling at the efficacy of coronavirus vaccines and hoping the end was in sight. It wasn’t long before delta hit and the ICU again began to fill. Weary employees exchanged looks of disbelief. Not again, they thought.

Now, when Patel looks at the ICU, there are more contract nurses and fewer people who have known the hospital, and the community, for years. The team is mostly consumed by getting through the day, Patel said, making sure that patients continue to receive good care.

“We’ve gotten to the point that it’s beyond conversation,” he said. “We’ve had them all already.”

Still, he said, patients like Byrd give them hope.

He’d been too worried, Byrd told Patel, about what was in the vaccines to get immunized. And even though he still isn’t entirely sure, he told Patel he planned to get vaccinated — and encourage his grandchildren to do the same.

“As soon I am able, trust and believe,” he told the doctor. “I will be the first to have it.”

“No judgments,” Patel replied, “we’re gonna get you through.”

The Washington Post’s Emily Guskin contributed to this report.