Booster shots in US have strongly protected against severe disease from omicron variant, CDC studies show

Vaccine boosters provide robust protection against severe disease from the omicron variant in the United States, according to three reports released Friday that offer the first real-world data in this country showing the utility of the additional shots in keeping vaccinated people out of the hospital.

But the reports by scientists the Centers for Disease Control and Prevention are arriving late to the winter surge in coronavirus cases that have choked the corridors of hospitals across much of the country.

When omicron was first identified in late November and began spreading rapidly in the United States, millions of vaccinated people lined up for the extra shots. But that has slowed. To date, 39% of fully vaccinated people have gotten the additional doses, according to the CDC.

Surveys by private polling firms suggest the uptake could be somewhat higher, and the CDC has acknowledged that its data may be an underestimate. Still, despite laboratory studies that show an extra dose jacks up antibodies, repeated urgings from Biden administration officials and more recently, a succession of reports from multiple countries affirming that protection, the boosters have not been embraced by Americans to the extent the initial shots were.

One CDC report analyzed data from hundreds of thousands of emergency room, urgent care visits and hospitalizations between August 2021 and Jan. 5, 2022. It showed that a third dose of either the Pfizer-BioNTech or Moderna shots was 90% effective at preventing hospitalization, and 82% effective in preventing a trip to the emergency room or urgent care. On average, people had received their booster within about 44 days of seeking medical help.

The data includes a three-week period when omicron was the predominant variant.

Omicron has a gaggle of mutations that enhance its ability to elude the neutralizing effects of antibodies, the first layer of immune system protection produced by the shots, as well as by natural infections. Most vaccinated people in the United States received either the Pfizer or Moderna vaccines.

Federal health officials have urged people to get the third shots for several months. CDC recommends booster shots for everyone ages 12 and older, five months after getting two doses of the vaccines made by Pfizer-BioNTech and Moderna, or two months after a single dose of the Johnson & Johnson vaccine. Since early January, CDC officials have said people should get three doses of Pfizer-BioNTech or Moderna’s vaccines to be considered “up-to-date” on their inoculations, and those who got Johnson & Johnson should receive a second dose, preferably of Moderna or Pfizer-BioNTech, to be considered up to date.

The protection from just two doses of those vaccines has declined since omicron became predominant, with the biggest decline among people who were six months past their second shot, said Mark Thompson, a CDC epidemiologist and lead author of the first report.

“That’s the bad news,” Thompson said. “The good news is that for people who received a third booster dose, the effectiveness of three doses is very high and protects against moderately severe and severe disease. This is among the first data that really shows the actual level of protection in the United States.”

Despite this protection against dire outcomes, boosters are not a guarantee against mild breakthrough infections. Most omicron infections are asymptomatic or “mild” — meaning the person can recover at home.

Health experts welcomed the new data, saying they hoped it would encourage millions of vaccinated Americans to get booster shots. The latest U.S. data echo what researchers in the United Kingdom previously found — that after a third shot of the Pfizer vaccine, protection against hospitalization was above 95% (two weeks after the shot) and remained around 80% even after four months.

A study published earlier in the week from Kaiser Permanente Southern California, which has not yet been peer-reviewed, showed much the same — protection against omicron-related hospitalization was nearly 90% four months after a booster.

“We should be celebrating this,” said Eric Topol, a molecular medicine professor at Scripps Research, referring to the findings. Public health officials need to message clearly that while the vaccines and booster shots are “not holding up against omicron infections, they are holding up the wall against severe disease ... and that’s phenomenal,” he said. “A booster is essential for preventing severe disease, hospitalization and deaths.”

It’s not clear why booster uptake has slowed. Omicron is generally described as a milder variant, despite it’s extraordinary transmissibility, meaning less likely than the previously dominant delta variant to cause severe disease. That fact, combined with general exhaustion with the pandemic, may sap the desire of some people to take additional steps to protect themselves. As whole nations shift their strategy to one of “living with the virus,” many people may discount the need to follow health officials’ advice.

The booster issue has also been dogged by controversy within the scientific and regulatory community and among global health leaders. The World Health Organization has repeatedly called for prioritizing vaccinations in countries where shots are hard to come by, rather than giving boosters in wealthy countries that are already largely vaccinated. And last year, some scientists in the United States, including at the Food and Drug Administration and CDC vaccine advisers, were skeptical boosters were necessary, since the initial doses continued to show good protection against severe disease and death.

Misinformation is also rampant in the United States, including the idea the vaccines don’t work at all. Former President Trump was booed last year at a rally when he revealed he had gotten a booster shot.

The Biden administration made its booster recommendation last summer at a time when there were fewer studies and greater uncertainty.

“We have lacked this level of data. That’s one of the reasons why there was so much discussion of booster recommendations back in the summer,” said Joshua Sharfstein, vice dean at the Johns Hopkins Bloomberg School of Public Health and a former top official at the Food and Drug Administration.

“There’s uncertainty as decisions are made, and these recent papers are filling in the blanks,” he said. “The evidence is coming in and it’s very strong.”

Sharfstein, who regularly volunteers at a Baltimore city vaccination clinic, said many people getting their first shots say “they never got around to it until their job required it.” Others, including those getting boosters, are scared of omicron because they know people who are sick, he said.

In January, with the omicron wave slamming the country, about 682,000 booster doses were administered daily, according to the latest CDC data. That pushed up the share of vaccinated people who received a booster to 39%, up six percentage points. Just under half of the boosters went to people between 18 and 50.

But for vaccinated people over age 65, the most vulnerable group, more than one third have not received a booster. Only 4% of that group received boosters in January.

Some experts say the new studies argue for targeting boosters to high-risk populations.

“I think that the booster discussion has been sidetracked by a desire for a one-size-fits-all-strategy,” wrote Amesh Adalja, a senior scholar at the Johns Hopkins Center for Health Security in an email. The importance of boosters for those most vulnerable may be diluted by the messages for universal boosting coming from the administration, he said.

“When I work in the hospital, it is not people that lack boosters that are occupying ICU beds - it is those that lack first and second doses. If everyone eligible to be boosted was boosted, hospitals would still have capacity problems because of the lack of first doses in high-risk individuals,” he wrote.

Four states have given boosters to a majority of the vaccinated people, according to the latest CDC data: Vermont, Maine, Wisconsin and Minnesota. Five states plus the District of Columbia have given boosters to less than a third of the people with vaccinations: North Carolina, Alabama, Georgia, Texas and Mississippi.

Some experts say the messaging around the number of shots needed for vaccination has been confusing, in part because no one anticipated how the virus would evolve.

When vaccines were first rolled out in December 2020, officials made a “communications blunder” when they said vaccinations would be “two shots, and done,” Andrew Noymer, an epidemiologist at the University of California, Irvine, wrote in an email after reviewing the new data.

This fall, many were confused as a result of complicated booster guidelines. It was not until Nov. 19 that all American adults became eligible for coronavirus vaccine boosters.

As a result, many ordinary people may regard the push for boosters as a case of “moving the goal posts, and are wary of getting on the train of never-ending boosters,” Noymer wrote.

A second CDC report that looked at cases and deaths among unvaccinated and vaccinated adults from April to Dec. 25, 2021, found that when delta was the dominant variant, and in the initial days of omicron, people who were fully vaccinated and boosted had the highest protection against infection.

A study published in JAMA by CDC scientists also found that a third dose of an mRNA vaccine provides significant protection against symptomatic disease for both the delta and omicron variants, with greater protection against delta. 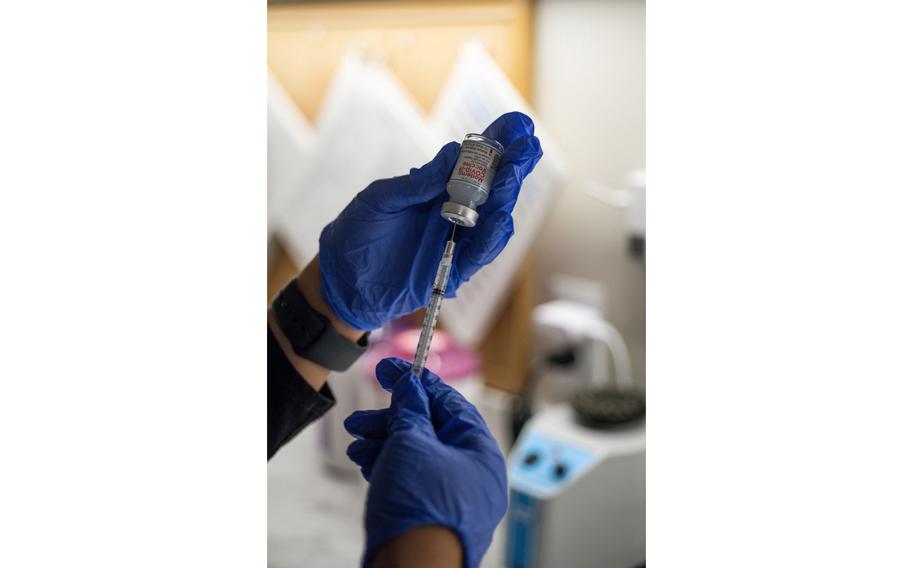