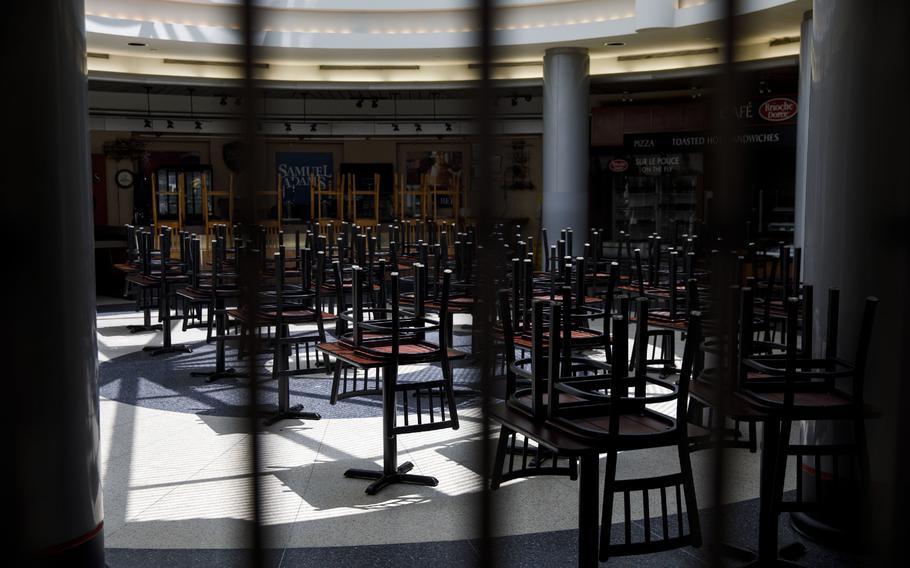 Chairs rest on tables in a food court at O’Hare International Airport in Chicago on June 13, 2020. (Patrick T. Fallon/Bloomberg)

U.S. flight attendants are calling on airports to limit passengers' access to alcohol before flights, saying the free flow of liquor is fueling clashes once planes are in the air.

"We've seen an increase in the pushing of alcohol to try and get sales up," Association of Flight Attendants president Sara Nelson said, citing data showing the number of incidents soaring. Airports are "sending the wrong message about people drinking right up to the second they get on the plane, and even that they can take that alcohol onto the plane."

While a zero-tolerance policy and improved messaging have had some impact slowing a surge in in-flight disruptions, airports have failed to discourage excessive drinking, Nelson said at an International Air Transport Association conference last week. Southwest and American have banned on-board alcohol sales to economy passengers through at least January after lobbying from groups including the AFA.

The comments from Nelson, whose group represents U.S. cabin crews, may help to further efforts to limit "to-go" alcohol sales at airports. Federal Aviation Administration chief Steve Dickson and Representative Peter DeFazio of Oregon have called on airport bars to stop selling such drinks for takeaway.

In the U.S., outbreaks of inflight violence and unruly behavior during the pandemic have focused on compulsory wearing of face masks.

Almost three-quarters of the more than 5,300 unruly-passenger reports logged by the FAA through Nov. 23 were mask-related. More than 1,000 cases were serious enough to warrant a formal investigation, up from about 140 a year pre-pandemic.

Drinking has the effect of emboldening people who resent being compelled to don a face covering to escalate their opposition into outright confrontation, Nelson said.

"Even those who might be inclined to comply with instructions like mask wearing have a harder time actually complying when they're having that alcohol," she said.

A complete ban on alcohol is unlikely, given the importance of food and beverage sales at airports. Retail sales at airports totaled $27.6 billion globally in 2019, according to an Allied Market Research report.

In a November commentary published in USA Today, Christopher Bidwell, senior vice president for the Airports Council International - North America lobby group, pointed to FAA data showing alcohol is a factor in only 6% of incidents. He called for extra vigilance at boarding gates and greater sharing of information to clamp down on unruly behavior.

In an incident last week, a drunken passenger assaulted a flight attendant and injured a federal air marshal on a Delta flight, the Washington Post reported.

"These events are out of control, disrupting travel and putting everyone at risk," Nelson said. "The freedom of flight comes with an agreement to follow the rules."

While pushback against the mask rules isn't confined to the U.S., a survey of 4,700 passengers in 11 countries showed that 85% supported compulsory mask wearing, said Tim Coleman, IATA's assistant director for external affairs.

With views on the virus polarized, U.S. flight attendants are "seeing a greater amount of conflict come out of places where those leaders are giving a different message, that masks are not needed," AFA's Nelson said.