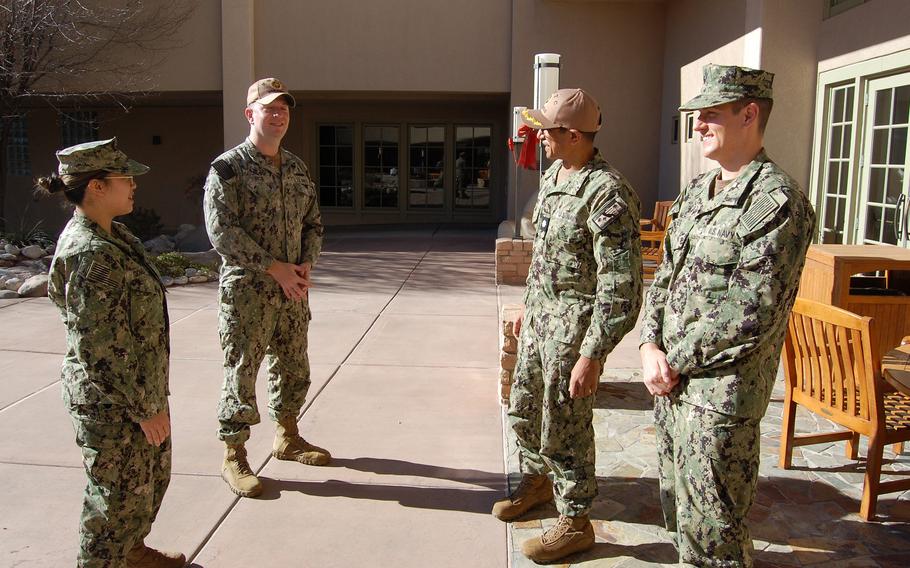 FARMINGTON, N.M. (Tribune News Service) — Nikunj Bhatt is a physician, but he also is a commander in the U.S. Navy. So it seems only logical that he processes many of his experiences from a military perspective and frames them in those terms.

When it comes to describing the medical community’s sense of urgency related to the effort to limit the spread of COVID-19 and mitigate its more severe effects, he offered the following assessment.

“In some ways, this is our World War II,” he said.

Bhatt is one of several members of a Naval Medical Readiness Training Command team from San Diego that was deployed to the San Juan Regional Medical Center on Dec. 3.

Their 30-day mission is to assist the hospital’s staff in managing its unprecedented COVID-19 caseload. He and three other members of the team sat down with The Daily Times on Dec. 11 to discuss their experiences here and how their assignment has affected them.

Bhatt’s description of the overall fight against the spread of the disease as comparable to a generation-defining global challenge perhaps belies a growing consensus that the battle against COVID-19 will not end anytime soon.

As the pandemic approaches its second anniversary early next year with no end in sight, Bhatt said that even though the setting may have changed for members of his team with this deployment, the objective remains the same.

“We’ve been battling this throughout the world in multiple locations,” he said of teams like his.

Bhatt noted that the environment in Farmington may not be the same as it is at his team’s home institution, but adjusting to those kinds of differences comes with the job. Learning to develop flexibility and coping skills is one of the best things about being in this position, he said.

“It’s been a powerful experience and a very rewarding experience,” he said. “ ... All of us have volunteered with the expectations that we will be doing these kinds of missions.”

He said that as his team gains experience, it will be even better prepared to handle emergencies like this in the future.

“It’s about optimizing what we can do to support and help the hospital care for their patients,” he said.

Hospital Corpsman Second Glass Jessika Gomez, a respiratory therapist, said her work with the team has been a great opportunity for professional development early in her career.

“This is a huge skill builder for a lot of us in terms of being malleable and being able to mobilize quickly,” she said. “That experience helps us grow in our knowledge and our assessments. ... Sharing that knowledge and integrating that into our own practices is win-win for everyone.”

Hospital Corpsman Second Class Brian Rice, another respiratory therapist, said he only recently completed his training. He believes the work he is doing here will pay significant dividends for him down the line.

Lt. Bob Geis, an internal medicine physician, said responding to the challenge of a situation like the one being faced by the San Juan Regional Medical Center is just the kind of thing his team was designed to handle.

“This is right in our wheelhouse,” he said.

This deployment has been very smooth so far, Geis and Bhatt said, lauding the professionalism and welcoming nature of the hospital administration and staff. Bhatt said the members of his team were seeing patients within 24 hours of arriving at the hospital.

That short time frame stands in contrast to the experience of other teams in other locations, he said, where it sometimes can take a couple of days just to iron out the differences in procedures, expectations and responsibilities between the hospital staff and the military or federal teams that have been deployed to augment their efforts.

Geis said his team’s integration into the hospital’s work flow here has been expedited and that its members have been made to feel appreciated by the community.

That kind of reception makes a difference, Bhatt said, explaining that the members of his team are here for a minimum of 30 days and could be deployed at the hospital even longer if civilian authorities request that their stay be extended. Either way, that means he and his associates will be away from their families during the holidays, he said.

Gomez said she is sorry she won’t have the chance to spend Christmas with her 1-year-old son because of her deployment here. But she said she understands the value of the work she is doing because her father died of COVID-19 early in the pandemic.

“I was so thankful to his health care team, and I want to give back,” she said.

In some ways, her work has been a tonic for her as she deals with her grief, she said.

“It was a little bit tough at first,” she said. “But as I learn more, it really has become therapeutic in a way. Knowing I’m working alongside such good people who are teaching us a ton, it’s been a good experience.”

Bhatt encouraged people who are not part of the medical profession to do their part by getting vaccinated, thus limiting the spread of the virus and helping reduce the demands on a severely taxed health care system.

“A lot of people can’t get preventative care (for other issues) because the system is overloaded,” he said.

He said while the virus clearly doesn’t care about the politics of the folks it afflicts, it increasingly has become a pandemic of the unvaccinated. Addressing those who have chosen not to get vaccinated, he said, “Being a part of a community and being Americans, we can do our part to help fight this disease.”

Geis said taking that kind of action benefits everyone.

“If you can prevent yourself from going to the hospital, that opens up the hospital for other patients,” he said.