With delta surges and the threat of omicron, states call on military medics to relieve hospital staff 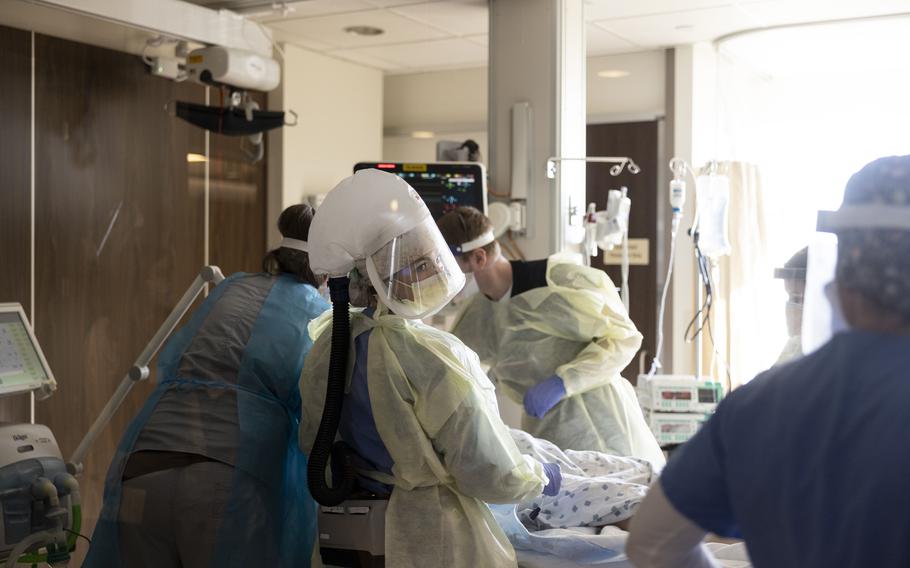 A team of nurses and physicians transfers a patient with covid-19 into an ICU room at CentraCare-St. Cloud Hospital in St. Cloud, Minn., last month. (Jenn Ackerman for The Washington Post )

Cases in Colorado rose by 4% in the past week, according to a Washington Post analysis. Hospitalizations in Michigan and New Mexico jumped by 4% and 9%, respectively. Michigan has more hospitalizations per 100,000 residents than any other state. And in New York, where hospitalizations have shot up by more than a third since Thanksgiving, Gov. Kathy Hochul, D, introduced a mask mandate Friday for all indoor public places in New York that do not require proof of full vaccination. The requirement starts Monday and will be reevaluated Jan. 15.

Several hospitals in New Mexico are operating under crisis standards because of staffing and capacity shortages, according to local news reports. In early November, more than half of the patients admitted to San Juan Regional Medical Center in Farmington, N.M., had covid-19, the hospital said in a statement. On Nov. 3, the hospital declared crisis standards of care, which allowed the institution to request aid from the state and federal governments as resources ran short.

In other parts of the country, such as Minnesota, the surge has been sustained for months instead of spiking and then sinking, creating enduring pressures on hospital infrastructure and staff.

"We are seeing the toll here after you have worked for four solid months, 12 hours a day, it's like being on the front lines of a war," said Michael Osterholm, director of the Center for Infectious Disease Research and Policy at the University of Minnesota. The reasons for the different shapes of surges mystify epidemiologists.

"Why are we in the fourth month of surge? I can't explain it for the life of me," Osterholm said.

Three teams of military medics from the Air Force, Army and Navy joined health-care providers in Colorado, Michigan and New Mexico this week to help treat covid-19 patients, the U.S. Army North said in a statement.

"We continually work with our local, state, and federal partners to assess COVID-19 response needs to ensure we are providing the right type of support, in the right place, at the right time," said Lt. Gen. John R. Evans Jr., a U.S. Army North commander.

The Air Force sent a 15-person monoclonal antibody infusion team to Denver, the Army sent 20 medical personnel to Saginaw, Mich., and the Navy deployed a 20-person medical team to Farmington, N.M. The teams, which include doctors, nurses and respiratory technicians, have been mobilized in response to requests from the Federal Emergency Management Agency, according to the statement.

Nine other teams of military medics are working in Colorado, Michigan, Minnesota, Montana and New Mexico.

Los Angeles is experiencing a surge that appears to be related to family gatherings around Thanksgiving, officials said. And in Vermont, which for many months had some of the lowest case rates in the country, Middlebury College shut down in-person classes to quell a campus outbreak. The college reverted to remote teaching for the rest of the fall semester and canceled all indoor events, limiting informal indoor gatherings to six people.

The surge is driven by the delta variant, which accounts for about 99.9% of U.S. covid cases as of the week ended Dec. 4, according to a report released Friday by the Centers for Disease Control and Prevention - even as the omicron variant, which was discovered last month, continues to capture attention.

The most recent numbers also reflect a change in the correlations between vaccination rates and case rates. Before the delta variant hit, states with higher vaccination rates had significantly lower rates of cases, hospitalization and death than states with low vaccination rates. Now, during the delta surge, some highly vaccinated places, including New Hampshire, Vermont and Colorado, are experiencing above-average case rates. But the power of vaccines is clear: Highly vaccinated states still have significantly lower death rates than places with low levels of vaccination, a Washington Post analysis found.

Osterholm said that based on preliminary data from South Africa and Britain, he expects delta's dominance to wane rapidly as omicron takes hold. While the emergence of the new variant in the United States has in many cases been linked to individual events, such as an anime convention in New York City or international travel, those distinct experiences will soon be lost in widespread community transmission, Osterholm said.

"I think in three to four weeks, it could be dominant," Osterholm said. The speed of transmission, he said, is reminiscent the H1N1 influenza pandemic, which was identified in March 2009 in Mexico, showed up in April in San Diego, and 30 days later was confirmed in 142 countries.

In the week from Dec. 1, when the first case of omicron was reported in the United States, a total of 22 states identified at least one variant case, including some indications of community transmission, according to CDC data.

"Among 43 cases with initial follow-up, one hospitalization and no deaths were reported," the CDC said.

More than half of those cases were in people between 18 and 39 and about one-third reported international travel, according to CDC Director Rochelle Walensky, who spoke at a White House briefing Friday.

Nearly 80% - or 34 of the individuals - were fully vaccinated. And about a third of them received a booster dose, though some had only recently received the additional shot. Preliminary data shows that booster shots could help control omicron by raising antibody levels.

But booster shots continue to provoke controversy around the world as hundreds of millions of people have yet to receive their first shots. More than 50 million Americans have received booster shots. Anthony Fauci, the nation's leading infectious-disease expert, said in a Washington Post Live interview this week that, based on preliminary data, "the booster shot could be the answer to the challenge that we're facing with the omicron." He also said additional shots might provide longer-term benefits by broadening "the breadth and perhaps even the durability of protection" by inducing what is known as the affinity maturation of the immune response.

But a World Health Organization advisory group resisted the idea of a broad-based global rollout of boosters. In a media briefing Thursday, Alejandro Cravioto, the Strategic Advisory Group of Experts (SAGE) chair, reiterated the concern that amid widespread disparity in access, the priority should be on getting first doses into arms.

The WHO has previously endorsed boosters or third doses for those who are immunocompromised. Johnson &amp; Johnson also announced Thursday that the WHO has recommended that people who were initially immunized with its product get a booster.

At Friday's White House briefing, Walensky urged parents to get their children vaccinated.

The Washington Post's Jacqueline Dupree and Dan Keating contributed to this report.