by
Erin McCarthy and Justine McDaniel
• The Philadelphia Inquirer • December 3, 2021 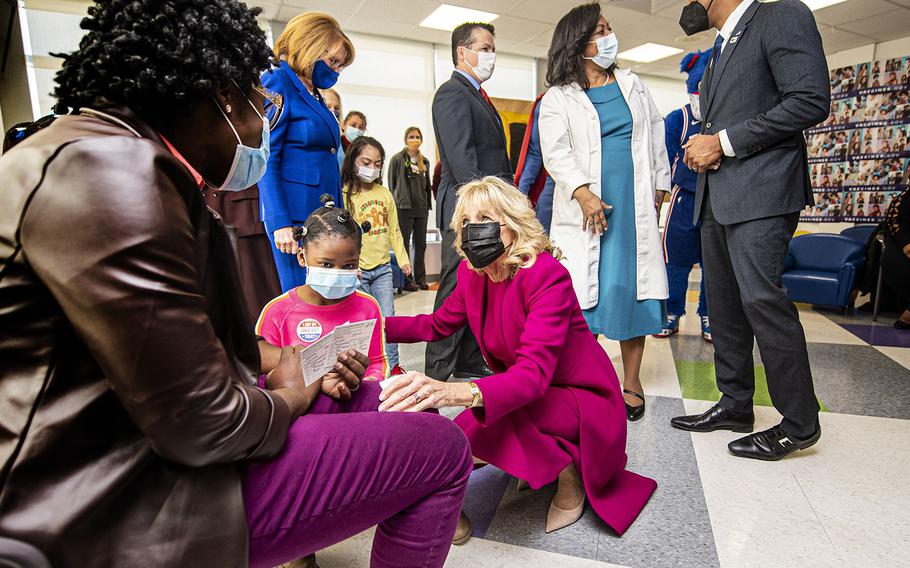 PHILADELPHIA (Tribune News Service) — As young children got vaccinated against the coronavirus on Friday at the Children’s Hospital of Philadelphia in West Philadelphia, they joined more than 12,700 kids who have already done so in Philadelphia.

Their shots were already exciting — finally being able to get protected against COVID-19 was a big deal for the little ones, and their parents — but Friday’s clinic included a special guest: first lady Jill Biden.

As she joined several families in CHOP’s post-vaccination room, Biden shook hands and congratulated them on getting vaccinated.

“It was easy, right? And now it’s going to protect you,” Biden told one youngster, squatting down to talk to the girl and her sister.

Another mother proudly showed her own vaccination card to Biden, saying, “We are all vaccinated.” One young girl who had just received a shot screamed, “Oh my god!” when Biden walked in. She ran up waving, paused, and then flew into the first lady’s arms.,

Four million children 5 to 11 have been vaccinated since that age group became eligible on Nov. 2, according to the White House, along with 15 million adolescents.

But after an initial rush of highly interested families, the demand for kids’ shots has slowed, and both federal and state officials are hoping to accelerate vaccinations. Generally, that means convincing parents, who can be hesitant about vaccinating their children even if they themselves are vaccinated.

In Pennsylvania, more than 91,000 5-to-9-year-olds have gotten their first dose, about 15% of that population. More than a quarter of those living in Montgomery and Chester Counties, which have the state’s highest rates, have done so. For 10-to-14-year-olds, a third have at least one dose, nearly 219,000 children. In Philadelphia, 10.6% of children 5 to 11, or approaching 13,000, had had at least one shot as of Thursday.

“I think we’ve had a good start, but my wish would be to have everyone eligible to get vaccinated,” said Denise Johnson, Pennsylvania’s acting physician general, at a Thursday visit to a vaccination clinic in West Chester.

In Philadelphia, Health Commissioner Cheryl Bettigole said this week that demand had dropped off after parents who were “very eager” to vaccinate their children secured their appointments.

“We have a lot of work to do in terms of vaccinating children at this stage,” Bettigole said. “We knew that for the rest of the city we were likely to need to do a fair amount of work there. We’ve seen data for the last few months showing that parents were a little more hesitant to vaccinate their children in general than themselves.”

Bettigole said the city and community partners have crews out educating parents about the vaccine, particularly in neighborhoods with the lowest vaccination rates. The health department is also working with the school district.

The Philadelphia suburbs have vaccinated youths in numbers above the state average, with Montgomery County leading the state in all age categories.

In Chester County, where 87% of residents age 19 and older have been vaccinated, health director Jeanne Franklin said they have also seen hesitancy even among vaccinated parents.

Shayla Durnell of West Chester had her two doses of Moderna months ago, but she wasn’t sure whether she was going to get her 5-year-old daughter, Anya Halteman, immunized.

But then, the weekend after Thanksgiving, she heard about the omicron variant. A video popped up on one of Durnell’s social media feeds, showing a South African leader speaking about the importance of immunizations in preventing future mutations of the virus.

So on Thursday morning, she walked into the West Chester vaccine clinic, holding Anya’s hand.

“I just want to be protected as much as possible,” said Durnell, 40.

Mom and daughter both got shots: Durnell sat down for her Moderna booster, then knelt beside Anya. And though Anya cried behind her blue Frozen mask as she was injected, seconds later, she was grabbing a sticker and giving a thumbs-up.

People hearing about the vaccine from a trusted messenger, whether a public health leader, a friend, or a doctor, is key to overcoming vaccine hesitancy, health officials say.

“What we know is parents trust their pediatricians, so they need that time to have that conversation,” Franklin said. “Some parents need one conversation. Some parents need more. These are our precious children and being a parent myself, those are important decisions we make for their life. So we understand they’re waiting to get that information.”