Netherlands tightens curbs in another attempt to halt virus 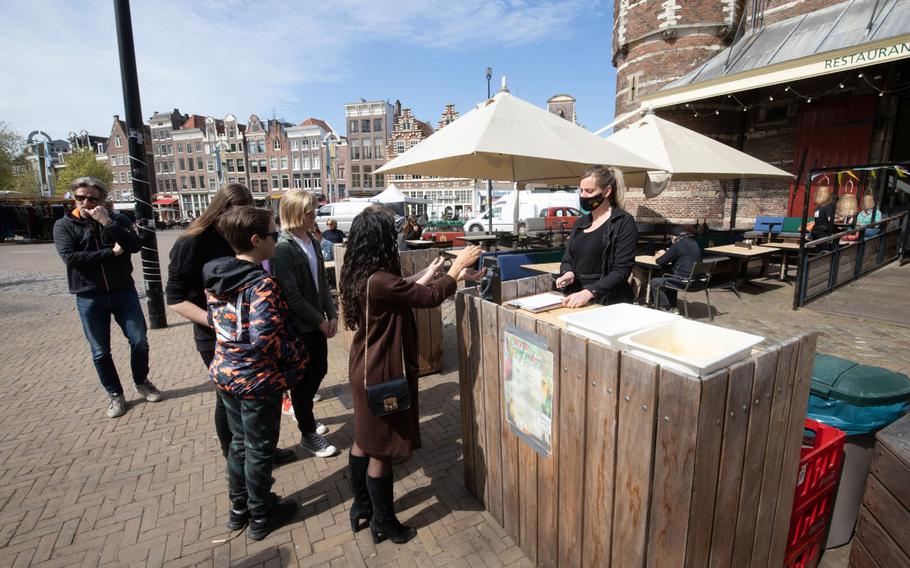 Customers use gel to sanitize their hands before entering a cafe in Netherlands, on April 28, 2021. (Peter Boer/Bloomberg)

The Dutch government will force bars and restaurants to close in the evening for the next three weeks, seeking to cap a surge in coronavirus infections that has heaped pressure on the nation’s battered health system and gripped much of western Europe.

The country will enter an evening lockdown, with non-essential sites from cinemas to gyms shutting down at 5 p.m. each day starting Sunday. Supermarkets will close from 8 p.m., and schools will be unaffected.

“The infections are high, higher, highest every day,” Prime Minister Mark Rutte said Friday at an emergency press conference in The Hague. “We need new measures that will ask a lot from us all.”

The government also announced an extra $2.5 billion (2.2 billion-euro) program for businesses to ease the impact of the latest measures, including support to pay employee salaries and other fixed costs.

Despite being in a partial lockdown for the past two weeks, the country has failed to stem a jump in infections even though more than two-thirds of the population has had at least two vaccine doses. Throughout the pandemic, a limited capacity of intensive-care beds has created a bottleneck for the country.

For every 100,000 residents, there are just seven ICU beds, compared with 48 in Germany and 19 in France, according to a University of Oxford study that compiled OECD, World Bank and government records. Previously, German hospitals have admitted Dutch patients to help ease the pressure but Germany is now facing rising numbers of its own.

The latest measures come as a new variant, first detected in Botswana and South Africa, threatens to derail a tentative recovery in the global economy. Financial markets tumbled across the world Friday as the mutation, called a “Variant of Concern” by the European Centre for Disease Prevention and Control, prompted governments from the U.K. to Hong Kong to bar travelers from southern Africa.

The Netherlands also trails its EU peers when it comes to booster vaccines. While countries like Austria and Belgium, countries with smaller populations, administered respectively 1.6 million and 1.3 million boosters, the Dutch so far only have processed approximately 100.000 doses according to the European Centre for Disease Prevention and Control.

The majority of Covid-19 victims that end up in the hospital have not been vaccinated. The deadly combination of the current rate of high infections, the limited amount of ICU beds and postponed medical treatments for other patients, has forced the government to take stricter measures -- measures that prompted riots last weekend in Rotterdam.

“Last year we all thought that a grand vaccination strategy would result in less stringent measures today,” Rutte said. “That is what the government thought, that is what experts thought, but the reality is very different.”