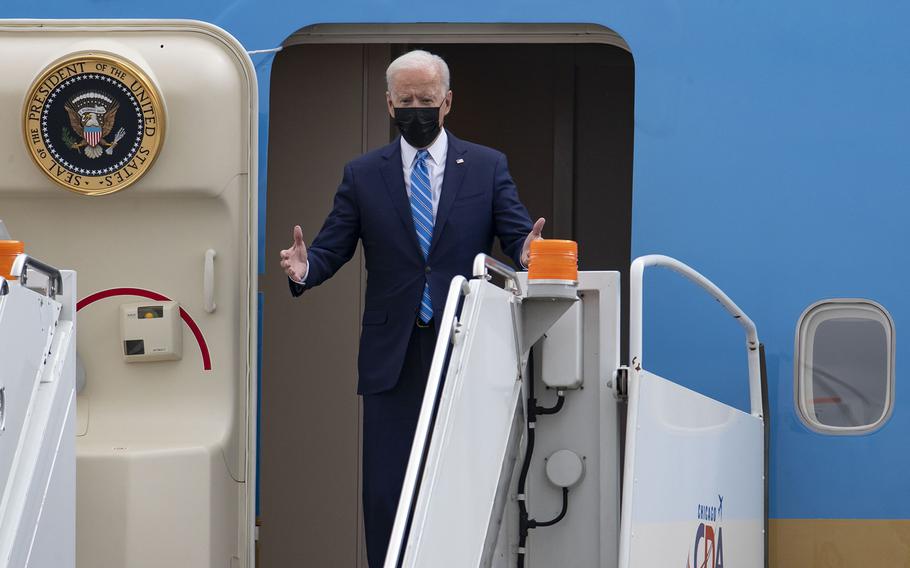 CHICAGO (Tribune News Services) — Noting progress in combating a resurgence of COVID-19 and saying the nation was headed in the right direction, President Joe Biden warned the country to keep its “eye on the ball” as he touted his mandate that large employers require workers to get vaccinated or submit to weekly testing.

Speaking at a manufacturing site in Elk Grove Village, making up for a canceled trip a week ago, Biden restated his belief that “this has been a pandemic of the unvaccinated” that has overtaxed the country’s health care system and personnel who are “getting the living hell kicked out of them.”

“The unvaccinated also put our economy at risk, because people are reluctant to go out,” he said. “Here’s the deal, these requirements are already proving that they work.”

Despite his mandate, Biden implored more businesses to require employee vaccinations on their own. “I know these decisions aren’t easy but they’re an example, a powerful example. Get vaccinated.”

“For folks who haven’t gotten vaccinated, get it done. Do the right thing. It can save your life. It can save lives of those around you,” he said. “We can end this thing. It’s easy. It’s accessible and it’s free to get the vaccine.”

Biden met with Gov. J.B. Pritzker, Chicago Mayor Lori Lightfoot and United Airlines CEO Scott Kirby and visited a construction site being built by Clayco. Clayco is owned by Bob Clark, a major Democratic donor. Company officials are scheduled to announce a system of required vaccinations or weekly testing for all employees.

In advance of the trip, the Biden administration produced a report in support of his vaccine mandate, saying that without requiring vaccines, “we face endless months of chaos in our hospitals, further detrimental impacts on our economy, and anxiety in our schools. With them, we will accelerate our path out of the pandemic.”

The report said more than 185 million Americans are fully vaccinated, up from just 2 million when Biden took office, about a month after the federal Food and Drug Administration gave emergency authorization for the Pfizer vaccine. The White House contended “the unprecedented pace of the president’s vaccination campaign saved over 100,000 lives and prevented 450,000 hospitalizations.”

The report said vaccination requirements have increased inoculation rates by more than 20 percentage points to over 90% in many organizations, have already helped cut the rate of unvaccinated Americans by one third and are backed by the public in opinion polls.

“Vaccination requirements are in place at 25% of businesses, 40% of hospitals, and colleges and universities serving 37% of all graduate and undergraduate students.”

Biden’s second trip to the Chicago region as president comes a week after he canceled a planned appearance here in order to stay in Washington to handle negotiations over raising the debt ceiling and efforts to advance his social and infrastructure economic package.

Biden’s recovery proposals remain mired in the same stalemate that resulted in his earlier decision to cancel but there was progress on the debt ceiling issue.

Discussions continue over Biden’s “Build Back Better” agenda amid divisions among Democrats over the price and scope of the package. Those divisions also threaten progress on a bipartisan infrastructure bill of more than $1 trillion that also is key to Biden’s economic pandemic recovery efforts.

Late Wednesday, Senate Republican leader Mitch McConnell indicated he could go along with a short-term extension of the debt ceiling, pushing off a long-term solution until December. On Thursday, Senate Majority leader Chuck Schumer agreed to the deal, which would raise the debt ceiling by $480 billion — setting up another fight over the issue late in the year.

The amount of the increase represents what the Treasury Department estimates will be needed to pay the government’s bills through Dec. 3.

On both his pandemic efforts and economic agenda, Biden has found a strong supporter in Pritzker. In recent weeks, members of Biden’s administration have traveled to the state to promote the president’s legislation on issues ranging from child care and early education to affordable housing.

Even as signs appear in some higher vaccinated states, including Illinois, that COVID-19 cases are slowing, the Democratic president has made clear that he views vaccination hesitancy a significant obstacle to restoring the economy and a fuller sense of pre-pandemic normalcy. He has encouraged private businesses to impose their own vaccination mandates aside from his still-pending federal rule.

Biden issued his vaccination mandate Sept. 9 on businesses with 100 or more workers. The U.S. Department of Labor’s Occupational Safety and Health Administration is still putting together rules, and there is no implementation date. It would affect an estimated 80 million Americans.

In issuing the mandate, Biden cited Chicago-based United Airlines as an example of companies taking action. United implemented its requirement for all of its employees in August and said nearly all employees have been vaccinated. Corporate workers for Chicago-based McDonald’s and Deerfield-headquartered Walgreen’s also face similar company-imposed mandates.

Violation of Biden’s mandate would result in penalties of up to $14,000 per occurrence. The mandate also will require those businesses to provide paid time off for workers to get vaccinated or to recover from the shot. Biden’s mandate has faced opposition from many Republican governors and some GOP-aligned business groups who have warned of lawsuits to challenge the president’s action.

But in Illinois, Pritzker has made his handling of the pandemic a centerpiece to his reelection campaign next year against prospective Republican challengers who have criticized his mitigation efforts, including mandatory vaccination or testing of health care and education workers and mandatory masking of school students, as usurping personal rights and local control.

Biden’s trip to Elk Grove Village served as a reward to a loyal Democratic donor.

Clark, the founder and executive chairman of Clayco, has made more than 385 federal campaign contributions totaling $1.57 million to Democratic candidates and causes over the last 30 years, according to records from the Federal Election Commission. That includes more than $260,000 in contributions to Biden’s 2020 campaign and the Democratic Party in key presidential swing states.

The St. Louis-based development executive also served as a bundler for Biden’s campaign, securing at least $100,000 in contributions from donors. Clark was among the most loyal donors to Rahm Emanuel, gifting travel to the former mayor several years in a row and contributing more than $120,000 to his campaign. Emanuel’s administration approved developments built by Clayco in the city, and the mayor appeared at an event with Clark when the executive announced his firm would relocate its headquarters to Chicago.

Biden’s visit followed a July event the president held at McHenry County College in Crystal Lake to highlight his plan to help working- and middle-class families. The president’s focused on “human infrastructure,” but Chicago’s ongoing struggles to tamp down rampant gun violence emerged as the dominant theme of the day as two federal agents and a Chicago police officer were shot hours before Biden touched down in the city.