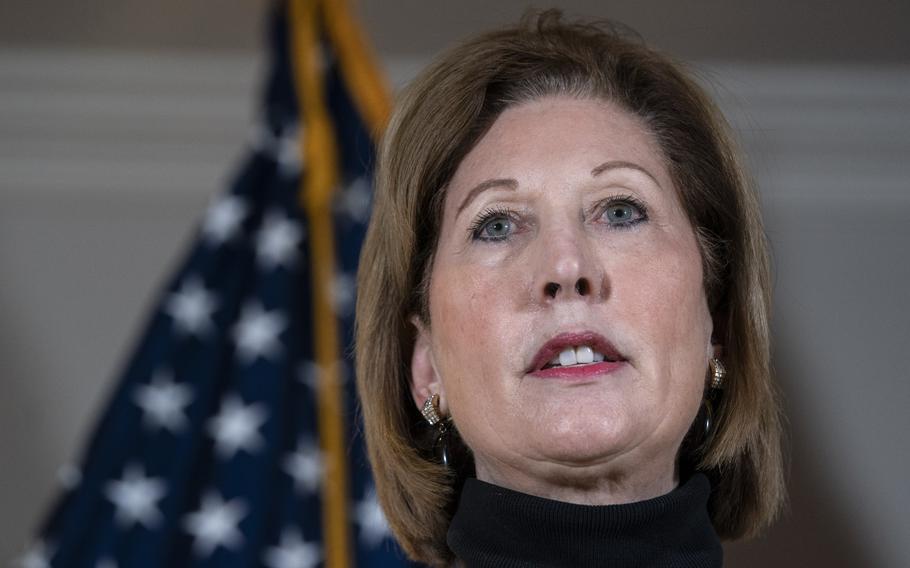 Attorney Sidney Powell speaks to the press about various lawsuits related to the 2020 election, inside the Republican National Committee headquarters on Nov. 19, 2020, in Washington, D.C. (Drew Angerer/Getty Images/TNS) (Drew Angerer)

‘The mandate, for all military personnel, makes service members use a product that was rushed to market, more than a dozen of them said in a lawsuit filed on Wednesday by Powell’s Dallas-based nonprofit group Defending the Republic.

“Soldiers are not property of the government,” Powell said in an email. “We seek to protect their individual rights to decide what’s best for their own lives and health in the face of this dangerous, experimental, and unnecessary ‘vaccine.’”

Medical evidence makes clear that vaccines are safe and effective at both curbing the spread of the deadly coronavirus and sharply decreasing the risk of hospitalization for those rare vaccinated people who do contract the disease.

Still, the lawsuit is more straightforward than those Powell filed to overturn the 2020 presidential election of Democrat Joe Biden in favor of Republican incumbent Donald Trump. Those suits were widely mocked for their wild conspiracy theories and even derided by federal judges. One, in Detroit, ruled that Powell and other lawyers pressing the theories had abused the courts with their suit and issued financial sanctions against them.

Leftover from that time is a $1.3 billion defamation suit against Powell by a voting technology firm she accused of flipping votes away from Trump. She denies wrongdoing.

One of the distinctive features of Wednesday’s lawsuit, filed in federal court in Pensacola, Florida, is its contention that the Pentagon’s vaccine mandate isn’t even necessary because the military has suffered “minimal hospitalization and mortality rates” from COVID-19. The plaintiffs say that between January 2020 and Sept. 15 a total of 238,120 service members tested positive for the disease, resulting in 2,175 hospitalizations (less than 1%) and 46 deaths (less than 0.02%).

In addition, the service members, from states across the U.S. including Alaska and Florida, are asking for an emergency court order not only blocking implementation of the Defense Department mandate but also undoing the Food and Drug Administration’s approval of the Pfizer Inc.-BioNTech SE vaccine.

Defense Secretary Lloyd Austin’s Aug. 24 requirement is invalid because it wasn’t vetted by mandatory public comment and Congress never granted such authority to the military in the first place, according to the suit. The Pentagon issued the rule a day after the FDA approved the vaccine, supplementing an earlier emergency use authorization. The service members accuse the FDA of rushing that approval to enable federal mandates.

Biden in July required that all federal employees receive a Covid-19 vaccine or submit to weekly testing to slow the virus’s highly contagious delta variant, which has helped push U.S. fatalities past 700,000 in less than two years. Earlier lawsuits by federal employees including service members, as well as workers challenging state and local mandates, have been filed.