A shortage of pilots looms as the next challenge for airlines 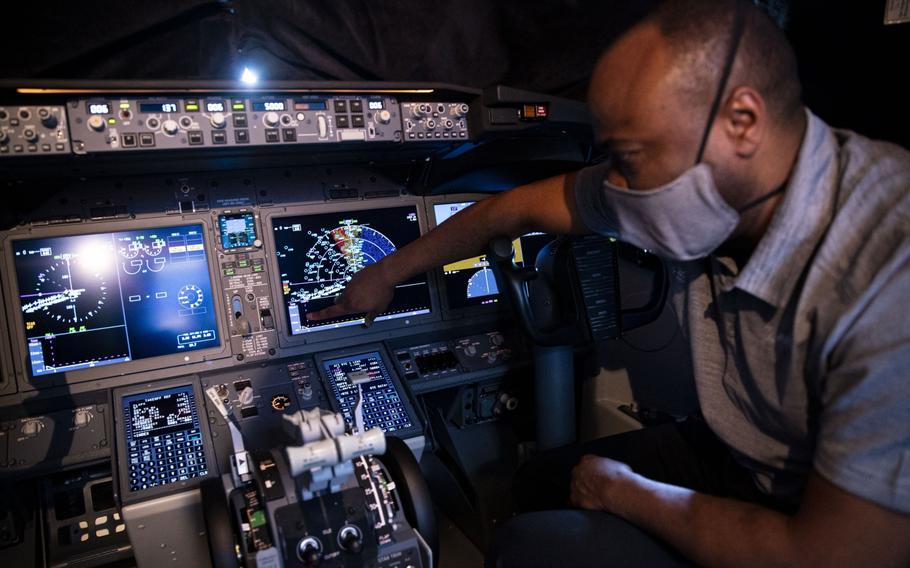 A Boeing employee demonstrates a touch screen control display in the cockpit of a Boeing Co. 737-9 aircraft at Ronald Reagan National Airport in Arlington, Va., on July 28, 2021. (Al Drago/Bloomberg)

After being thrust into crisis by the coronavirus, the aviation industry faces yet more trouble as the world emerges from the worst of the pandemic to find there’s now likely to be a shortage of pilots after thousands were laid off or decided to retire.

Government policies such as mandatory vaccinations for trainee pilots and travel curbs have also kept a new batch of potential aviators away, according to Bhanu Choudhrie, CEO of Alpha Aviation Group, which runs flying schools in the United Arab Emirates and the biggest one in Southeast Asia’s training hub, the Philippines. They’ve trained more than 2,500 pilots for carriers including Philippine Airlines, AirAsia Group, Cebu Pacific and Air Arabia.

Modern, longer-distance narrow-body aircraft like the Airbus A321 XLR jets — due to be delivered from 2023 — will require more pilots than earlier models, compounding the shortage, Choudhrie said in an interview from London.

Many airlines are aggressively trying to rehire pilots as well as cabin crew and ground staff, but that’s not been a simple process and some jobs are left unfilled. Careers in the industry no longer look as secure as before.

It takes 18-24 months to train a pilot, according to Choudhrie, which means carriers must work on getting them ready way ahead of the delivery of new aircraft, including narrow-body jets, like the A321 XLR, that can fly longer. Airlines typically order aircraft years in advance given the limited production capacity of plane manufacturers.

The crew ratio — or number of pilots assigned to a plane — could be as high as 18 for the A321 XLR compared with 10 or 12 for older models in the same family, said Choudhrie, who also heads U.K.-based private equity firm C&C Alpha Group and was an early investor in Air Deccan, a pioneer of India’s low-cost flying boom.

Boeing estimates that the world will need more than 600,000 new pilots in the next two decades, during which airlines will take 43,600 new aircraft deliveries. Demand for new planes will soar in markets where carriers are looking to replace their old fleet, and in countries like India, home to IndiGo, the biggest customer for Airbus’s best-selling narrow-body jets.

That’s why Alpha Aviation is setting up a new flight training center in India, with an initial investment of $15 million, and has plans to expand and invest as much as $100 million, Choudhrie said. He declined to elaborate ahead of a formal announcement.