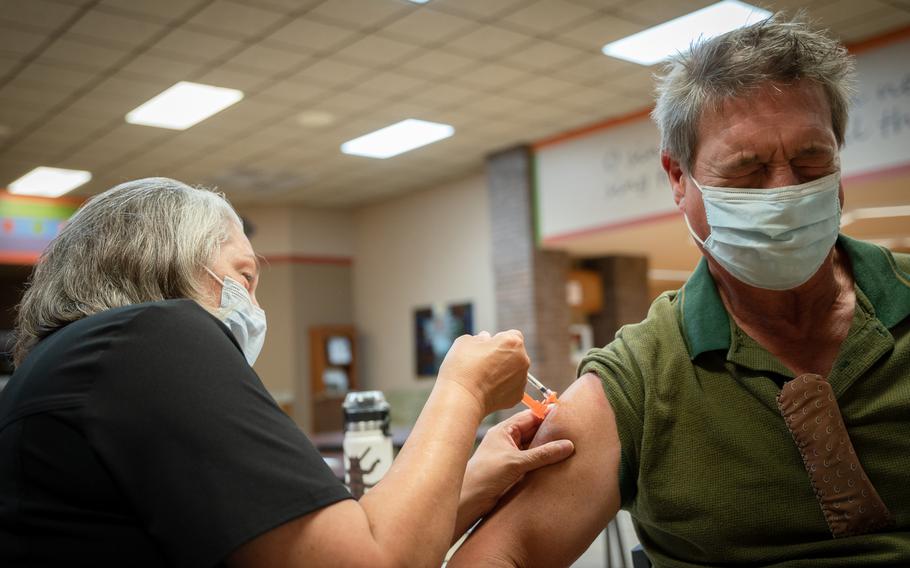 As federal policymakers search for ways to boost America's vaccination rates, a lack of paid sick leave is playing a role in deterring low-wage workers from taking time off to get vaccinated, according to surveys and policy experts.

The shortcomings are playing an underreported role in vaccine hesitancy in the country, particularly among lower-income populations. Workers who do not get paid time off to get the shot or deal with potential side effects are less likely to get the vaccine, research by a Kaiser Family Foundation study shows.

About two out of 10 unvaccinated employees said if their employer gave them paid time off they'd be more likely to get vaccinated, according to a Kaiser Family Foundation survey of 1,888 adults conducted from June 8 to June 21. Three vaccine clinic representatives said in interviews that the time-off issue was one of a handful they commonly hear from vaccine hesitant people.

That includes people like Zachary Livingston, the manager of a Subway in the Denver area.

The 40-year-old said he has been working 60-plus-hour weeks for months — with no bump in pay to his approximately $35,000 a year salary — to cover gaps in the store's schedule as it has struggled to find workers. He'd like to get vaccinated, and believes everyone should get the jab, but said he hasn't had the time or mental space to do it.

Livingston said he would have gotten the shot months ago, if he had been offered paid time off, but the store does not offer the benefit to get the vaccine or deal with the after effects — or sick pay, in general. He doesn't have health insurance, either, and said he hasn't seen a doctor in years. (Subway did not respond to a request for comment.)

Indeed, about a third of unvaccinated people, including some like Livingston, reported to Kaiser they would prefer to "wait and see" if they will get the vaccine while not ruling out the possibility of doing so.

"There is a share of the public that does not want the vaccine, but among those in the wait-and-see group the lack of time off is a major problem," said Ashley Kirzinger, associate director for the Public Opinion and Survey Research team at Kaiser. "And it disproportionately affects those with lower levels of income and those unable to take time off."

Daisy Berrospe, 30, the manager of a vaccine clinic run by La Clínica de La Raza, a nonprofit focused on the Latino and other underserved communities in Oakland, Calif., said it's an issue they hear about regularly.

"It's a big deal — it's either miss work and get the vaccine, or continue to go to work to keep up with your paycheck," Berrospe said.

Labor Secretary Marty Walsh said in an interview that he had not seen the data about the issue, but that he thought it was crucial for employers to give workers paid time off to get vaccinated.

"You should want your employees vaccinated," he said. "Pay them for the day and give them an opportunity. And if they don't feel good afterward, give them a couple days pay if you can."

However, not everyone agrees how big of a role paid time off policies play in overturning vaccine hesitancy.

Doug Holtz-Eakin, a GOP policy expert who led the Congressional Budget Office during the Bush years, said he was skeptical of the idea that a lack of paid leave is hurting the vaccine push.

"I find that hard to believe," he said. "You have to have a day off somewhere, and they've been trying to get the vaccines to people's doors. It does not seem plausible to me that that's the hang-up."

Congress took steps to provide emergency paid leave since the start of the pandemic, well before vaccines had been approved. In March 2020, legislators approved a paid leave program that reimbursed employers and required them to give their workers time off should they become sick with COVID. That program failed to cover millions of workers, exempting companies with more than 500 employees. And it expired last year.

President Joe Biden called for reinstating the mandate on employers to provide paid leave benefits, as part of his $1.9 trillion stimulus package. Congress ended up extending tax credits to reimburse companies that offer paid time off, broadening the program to cover time off for vaccines. But they made the program voluntary. Democrats have pointed to the limits of the budget procedure they used to approve the stimulus without any Republican votes.

"We have ample evidence that relying on employer-voluntary policies to protect people in this pandemic is not working," said Rachel Deutsch, an attorney at the Center for Popular Democracy, a collective of progressive groups, which has tracked corporate responses to paid leave. "The Biden team has done a terrific job in vaccination work, but it seems clear we're going to hit a wall with vaccinations as a result of an inadequate federal leave policy."

A teacher's assistant and translator in Los Angeles' public school system said she was also dissuaded from getting the vaccine because of concerns about missing work. The 28-year-old, who spoke on the condition of anonymity because she feared she'd be retaliated against by her employer, said that she has always wanted to get the vaccine, but never felt like she had the time or ability to do so with a full-time job and childcare responsibilities at home.

She felt it would be asking for a special favor to request time off to get it, since her bosses never required or encouraged anyone to get the vaccine, she said, and she didn't know if it would be appropriate to use the sick days she has been given from the district to get the shot.

"I didn't want to go through the hassle and them say, like, oh, you don't actually need it. Like, you're getting it as your own choice," she said. "I heard people say that, you know, their arm went limp, or that they had a lot of pain. I was just worried about having to drive somewhere, or potentially like coming down with a fever or any kind of side effect at work and not being able to perform."

Months ticked by, from May, when she started work again after some time off, through much of the summer without her being vaccinated. She got the shot on her first day of summer break, in mid-July.

Shannon Haber, a spokesperson for the Los Angeles Unified School District, said the district operated its own vaccination program between February and May to provide employees easy access to the vaccinations, giving them two hours of paid time off per test and three hours for the vaccine. They were given paid time for up to three days per vaccination dose, she said. However Haber declined to answer questions about whether the provision applied to so called semimonthly workers like the teaching assistant, who has provisional status because she does not yet have a teaching credential.

The White House provided a list of more than four dozen companies providing either some hours of paid leave or $100 bonuses — including Delta Air Lines, JPMorgan Chase, and Kroger's — "thanks to the President's call to action."

"We strongly believe we need paid leave in our country. That's why we've proposed doing that as part of the American Families Plan," the White House statement said.

Surging caseloads in recent weeks have prompted many companies to institute vaccine mandates for workers and pushed some of the vaccine hesitant off the fence independently of that as well. The Biden administration is also working for a major expansion of national paid leave as part of its $3.5 trillion budget plan, but that measure could take weeks to pass. Those measures may do little for low-income workers in the immediate future.

John Jameson, the founder of the left-leaning political firm Winning Connections, which is working with Colorado public health officials to reach out to the vaccine hesitant, said the group has come across people who don't feel like they are able to get the shot because of their work schedules and a lack of paid time off.

Outreach workers stress the ease and availability of the vaccine when they talk to people over the phone, using the same methods used to get voters to the polls.

"There's no question that if people had the opportunity to just take time off from work, it would be easier to get them to take the vaccine," Jameson said. "If you're in a minimum wage job and you're worried you're going to miss two days of work, that's enough disincentive to keep some folks showing up for their second shot."

The Washington Post's Rick Noack contributed reporting to this story.