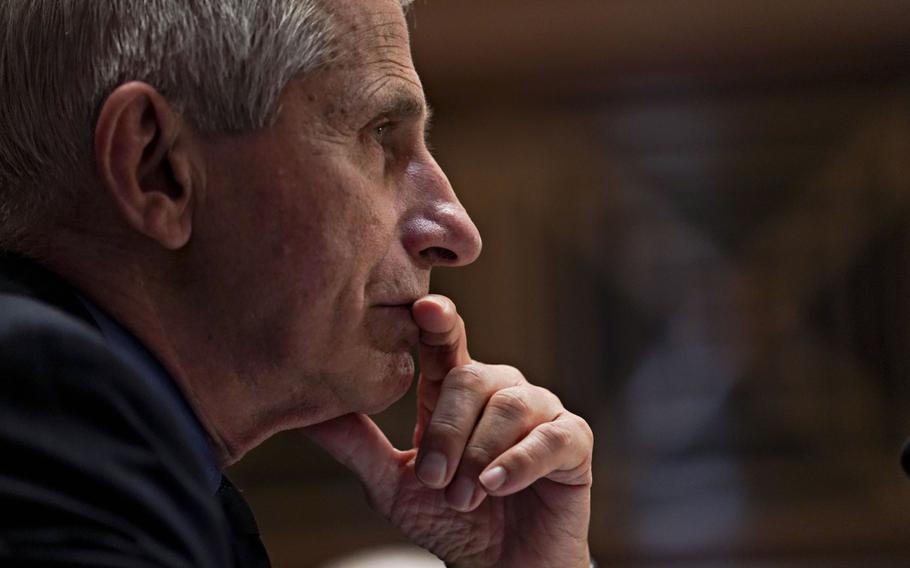 Anthony Fauci, director of the National Institute of Allergy and Infectious Diseases, during a Senate Appropriations Subcommittee hearing in Washington on May 26, 2021. (Stefani Reynolds/Bloomberg)

Anthony Fauci, President Joe Biden's chief medical adviser, said the U.S. will be "absolutely prepared" to distribute a third shot of the coronavirus vaccine quickly to a wider population if needed.

He gave no timeline but said health officials are evaluating various groups "on a daily and weekly basis."

"So if it turns out, as the data come in, we see we do need to give an additional dose to people in nursing homes, actually, or people who are elderly we will be absolutely prepared to do that very quickly," he said on CBS's "Face the Nation."

The issue of extra, or booster, shots has become more pressing, amid questions about "breakthrough" infections among the fully vaccinated, particularly with the more contagious delta variant now prevalent in the U.S., and whether the shots' efficacy declines over time. Last week, the U.S. Centers for Disease Control and Prevention approved a third shot for people with compromised immune systems.

The New York Times reported on Saturday that, with 100 million doses stockpiled, the Biden administration has begun drawing up plans to offer booster shots to some Americans as early as this fall.

Francis Collins, director of the National Institutes of Health, said no decision had been made "because right now the data we have from the U.S. says people who are vaccinated are fully protected, even against delta."

But, Collins said on Fox News "Sunday," "there is a concern that the vaccine may start to wane in its effectiveness over months. And delta is a nasty one for us to try to deal with. The combination of those two means we may need boosters, maybe beginning first with health care providers, as well as people in nursing homes, and then gradually moving forward."

Fauci also raised the issue of possibly stronger mandates either to wear masks or to get inoculated, at a time when he said 90 million in the U.S. who are eligible remain unvaccinated. He has in the past advocated voluntary vaccine mandates at the local level and in businesses.

"We've got to do mitigation, put aside all of these issues of concern about liberties and personal liberties and realize we have a common enemy, and that common enemy is the virus," he said. "And we really have to all pull together to get on top of this otherwise, we're going to continue to suffer as we're seeing right now."