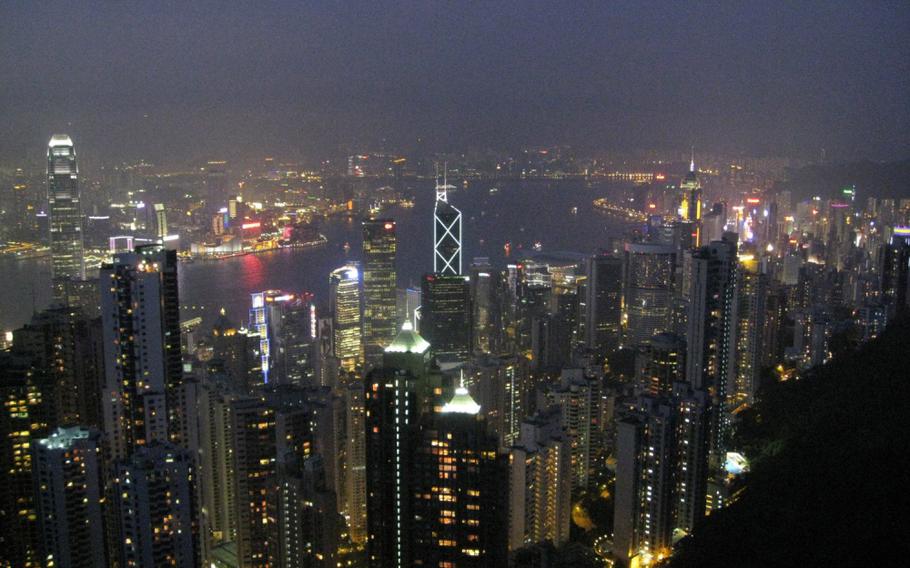 A night view of Victoria Peak in Hong Kong during a port visit by the nuclear-powered aircraft carrier USS Nimitz. (David Mercil/U.S. Navy)

Hong Kong tightened its travel curbs for residents returning from 16 countries -- including the U.S., France and Spain -- less than two months after it started easing some of the world's strictest quarantine measures.

The abrupt reversal reflects a fear of reopening as the delta variant drives resurgences across the world. Fifteen countries were moved up to the "high-risk" category, which means that vaccinated Hong Kong residents returning home must spend 21 days in hotel quarantine upon arrival, triple the previous length of stay. Tourists and unvaccinated residents from those places are no longer allowed entry.

The new restrictions take effect starting Aug. 20, according to a government statement Monday. Residents and tourists with antibody test results proving they had been vaccinated previously had to spend a week in hotel quarantine.

The flip flopping creates additional uncertainty and risks further diluting Hong Kong's attractiveness as a business destination. The city implemented new rules to allow visitors from all but ten places to enter on Aug. 9.

Hong Kong is caught between its desire to reopen and its zero tolerance for any cases of COVID-19. Meanwhile, its rival financial hub in Singapore has announced plans to ease COVID restrictions on daily life and begin slightly loosening border controls, citing vaccination rates that rank among the best in the world.

Hong Kong's success with COVID-19 has come through its strict mitigation measures, including lengthy hotel quarantines for those newly arriving. Just 39% of its population is fully vaccinated, less than many other developed economies. Mainland China, which is also following a COVID-zero strategy, has committed to tightly sealed borders to stamp out the virus, risking leaving it isolated for years.

"This is a devastating announcement in terms of the inability for businesses to plan," said Tara Joseph, president of the American Chamber of Commerce Hong Kong, in a WhatsApp message. "We respect the worries over the need to keep infections down, but business and people need to connect overseas and plan for the future."

The about-turn comes after a resident returning from the U.S. tested positive for the virus several days after completing a seven-day quarantine, sparking fears that the eased travel rules would allow the delta variant to slip into the Asian financial hub. Hong Kong has enjoyed a streak of over two months with nearly no local virus cases, even as neighbors like Singapore and mainland China struggled to contain the mutation.

"The global COVID-19 epidemic situation is under serious threat from the delta variant, with acute surges in the number of confirmed cases within a short period of time in many countries," the government statement said. The measures are meant to "uphold the local barrier against the importation of COVID-19," it said.

Hong Kong is once again seeing its border rules tighten as the delta variant spreads in neighboring areas. It also reinstated quarantine rules for its residents returning from Macao and mainland China, except Guangdong province.

The business community has struggled for the past 18 months with an economy that's been starved of big-spending tourists and business travelers. Hong Kong had about 99.9% fewer visitor arrivals in the first half this year than in the same period in 2019.

Hong Kong's economy has faced an uneven recovery from two years of contraction. Retailers and tourism-related businesses, which are some of the biggest employers of Hong Kong's working class, were particularly hard hit as borders remained closed and travel was curtailed. Financial services and the property market are booming, though, exposing a deepening wealth imbalance.