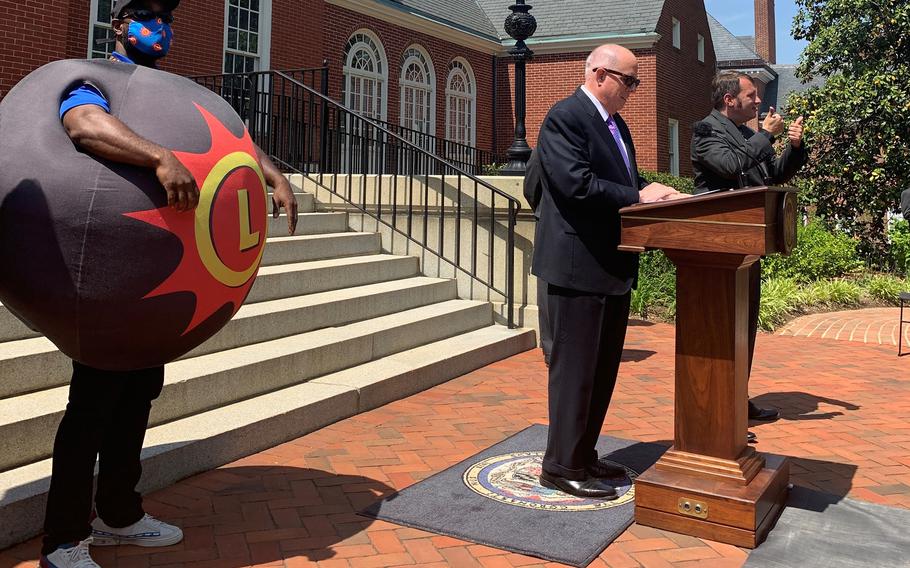 Desperate to get young adults vaccinated against the coronavirus and reinvigorate a slowing inoculation campaign, British authorities are trying a new strategy: FOMO.

"Don't Miss Out" warns the government's latest message, promoted with help from DJs and nightclubs. In other words, get your jab or risk getting left behind while your friends flock to bars and music shows. The London nightclub Heaven is also being transformed into a pop-up clinic on Sunday, offering 1,000 doses of the Pfizer vaccine.

Announcing the new campaign, Health Secretary Sajid Javid said getting a jab will allow people to "return to creating those special moments."

Britain has joined the gaggle of nations hoping to prod, push and plead their way toward vaccination and out of the pandemic.

For months, countries have tried everything from free doughnuts to big-jackpot lotteries. But in recent weeks, the effort has become more urgent, as the delta variant and other possible mutations threaten fragile progress and complicate reopening plans. So alongside a growing number of mandates, the incentives keep coming, with many of the new campaigns especially geared toward young people.

Germany is offering free sausages. New Zealand is organizing a vaccination music festival. Want an Instagram-worthy destination? In Romania, people can get vaccinated at a castle that may or may not have inspired Bram Stoker's "Dracula."

These programs are most common in wealthy countries with the luxury of unused doses, and large contingents of vaccine skeptics. But incentives have also cropped up in small towns and countries still struggling through the early stages of their vaccination drives.

"It's hard to quantify, but I do think that every incentive effort can make a difference, and that most probably do make a difference," said Jeffrey V. Lazarus, a professor at the Barcelona Institute for Global Health. "They should try whatever they can. Have fun with it, get it in the news, raise awareness."

As the pandemic stretches on and shots become more available around the world, the types of incentives will continue to evolve and adapt to local needs, he said. Reimbursements for the cost of travel to vaccine centers could become popular in low-income areas, while richer countries may need different ways to target the 30 to 40 percent of residents that have so far resisted.

Martin McKee, a professor of European Public Health at the London School of Hygiene and Tropical Medicine, emphasized that incentives need to have salience.

He noted that soccer-mad fans in north London may have been tempted by tours of its world famous Emirates stadium - available to those who got a vaccine at an on-site clinic earlier this summer. But he was more skeptical of the latest push, featuring discounted Uber rides and Deliveroo food delivery. "Kebabs for jabs," the Mirror tabloid dubbed it. "Whether anybody is going to get vaccinated because they will get a discount on a pizza, I doubt it," McKee said.

In Hong Kong, which struggles with affordable housing, developers are raffling off apartments. Anyone who is fully vaccinated can enter the draw for one unit, which is 449 square feet and worth about $1.4 million. Almost half a million people declared eligibility on the first day in June. A second condo will go to a lucky winner if 5 million residents have had at least one shot by the end of next month.

In Germany, stalling vaccinations prompted a search for new incentives. Among the most successful so far appear to be the free sausages. At a vaccination center in the eastern state of Thuringia, the combo of Bratwurst and Pfizer (or Johnson & Johnson) recently prompted a surge in appointments.

Katja Leikert, vice-chairwoman of the conservative CDU and CSU bloc in the German parliament, registered her disapproval. Offering Bratwurst as an incentive to get jabbed resembles "a decadent society of hedonism." She expressed incomprehension for adults who "don't feel a little strange when one has to hold a Bratwurst in front of them so that they get vaccinated."

Still, people were seen devouring their post-vaccination brats as early as 6 a.m.

In Wellington, New Zealand's capital, authorities are organizing a vaccination "festival," featuring music, live entertainment, food and jabs for three days in October. The idea of a stadium-sized party for the unvaccinated would seem outrageous elsewhere, but the country currently has no community transmission.

Liam Delaney, an expert on behavioral science at the London School of Economics, said that for many young adults, convenience is important and pop up clinics might work.

"If you have to travel any significant distance to a vaccination center, twice, and you're working, that can be a barrier to someone who doesn't perceive it to be a big health risk," he said.

Perhaps the most surprising and pun-inducing incentive campaign is taking place at a castle in Romania's Carpathian Mountains, which bills itself as the only fortress in the Transylvania region matching Stoker's description of Count Dracula's home.

Every weekend through the end of August, visitors who receive their shots at Bran Castle get free admission to the museum's exhibit of medieval torture instruments. "We want to show people how needles were used back in the Middle Ages in Europe," said Alexandru Priscu, the castle's marketing manager.

The castle has vaccinated about 2,000 people since May, Priscu said. It's a relatively small number, but the promotion has generated a torrent of media coverage, which Priscu hopes has indirectly spurred people to get their shots.

"We didn't open this marathon to report huge numbers, but to raise awareness - national and worldwide - and to bring an incentive to the people that doesn't come from the authorities," Priscu said. "Our goal is to bring back normality, to bring back 2019, and we think vaccination is the only way."

Elsewhere in Romania, the vaccinated can get free barbecue and books, but the country still has one of the lowest levels of vaccine uptake in Europe, with just 25 percent of residents fully inoculated.

In some U.S. states that held lotteries for vaccine recipients, with prizes as high as $1.5 million, leaders reported upticks in interest, but it's unclear how large of a role the incentive played. West Virginia, the first to announce cash giveaways, remains one of the least vaccinated states in the country.

Researchers at UCLA found that roughly one third of unvaccinated people in a randomized survey said cash payments of $25 to $100 would make them more likely to get a shot. That's in line with President Biden's call for cities and states to offer $100 cash payments to people who get vaccinated.

While studies of previous vaccination campaigns have shown incentives to be effective, questions remain about whether those results will apply to the high-profile and polarizing coronavirus shots.

Erik Wengström, an economics professor at Lund University in Sweden, is part of a team trying to find out. He is running a study measuring the effectiveness of different methods of persuading the unvaccinated. One group will receive the equivalent of about $23 if they get a shot. It's unlikely to persuade hardcore vaccine opponents, Wengström said, but it could be effective for those on the fence.

"We are targeting those who are thinking about taking the vaccine but don't find the time or think it's not worth the hassle to book an appointment or turn up," he said. "It's more nudging those over the threshold to do it."

Standard economic theory dictates that cash incentives are generally more effective than giveaways such as free food or tickets to sporting events, Wengström said, and because additional rounds of vaccination against COVID-19 are likely, it is crucial to find the most efficient ways to prompt people to get their jabs.

Some experts have voiced concern that money or other prizes might have the opposite of their intended effect.

When Serbia announced a cash payment for vaccination, one of its earliest critics was Zoran Radovanović, a veteran epidemiologist and former professor at the University of Belgrade.

"It is in a way a defeat," Radovanović said of the $30 incentive. "You recognize your educational policy failed. You have to coerce people."

And it could backfire, he warned.

"When you provide such incentives, people may assume that it's good for the government, but not for themselves," Radovanović said. "There is always such suspicion."

Serbia's vaccination campaign, once one of Europe's most successful, has since slowed to a crawl and is plagued by mistrust. Just under 40 percent of residents are fully vaccinated.

In countries such as Ireland and Australia, leaders have dismissed the prospect of free cash in exchange for vaccination. Australian prime minister Scott Morrison ridiculed the idea of paying residents $300.

It would, he said, represent a "vote of no confidence" in Australians.

Thebault reported from Brussels, Adam from London and Noack from Paris. The Washington Post's Shibani Mahtani in Hong Kong and Rachel Pannett in Sydney contributed to this report.