Millions of coronavirus vaccine doses around the world face expiration

by
Adam Taylor and Danielle Paquette
• The Washington Post • August 11, 2021 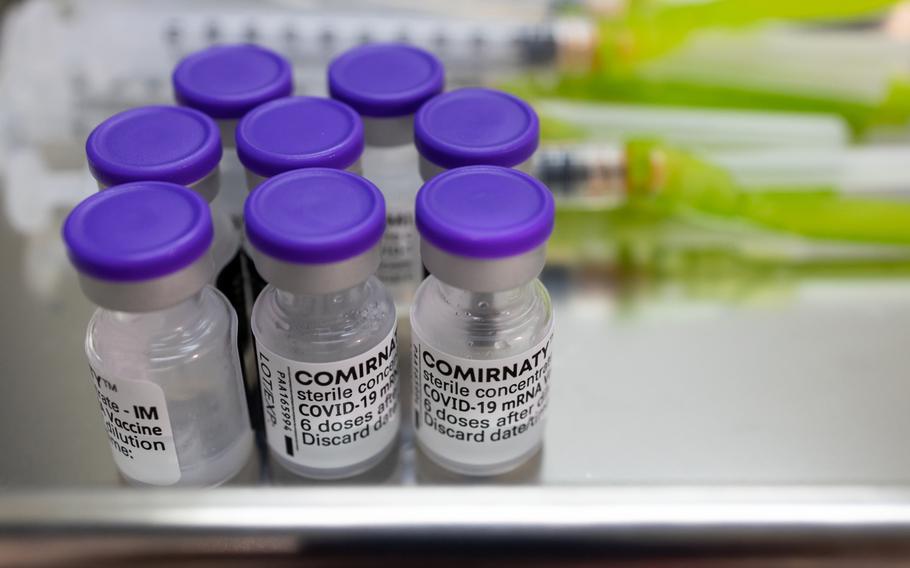 Vials of the Pfizer-BioNTech COVID-19 vaccine and syringes at a vaccination site inside the Incheon Samsan World Gymnasium in Incheon, South Korea, on June 8, 2021. (SeongJoon Cho/Bloomberg)

For months, a refrigerator at a government facility in the Dutch university town of Leiden has housed 90 or so small white boxes that contain thousands of dollars’ worth of AstraZeneca vaccine doses. But most of them are emblazoned with six small numbers that will soon render them worthless: 08.2021.

For Dennis Mook-Kanamori, a doctor at Leiden University Medical Center who until recently was administering vaccines there, the upcoming expiration of thousands of doses is tragic. What really incenses him, however, is that the Dutch government is set to let the doses expire rather than send them abroad.

The situation is mirrored in countless freezers, refrigerators and backrooms around the world as millions of coronavirus vaccine doses, developed at record-breaking speeds, march quietly toward expiration before they can be used. And as demand slows in wealthy nations like the Netherlands, more dust is gathering — and more doses are expiring.

Last month, Mook-Kanamori and his colleagues threw away 600 doses. By the end of August, the number is set climb by another 8,000. Unless something changes, by October, all 10,000 or so doses in the refrigerators in Leiden will have been thrown out. Doctors estimate there may be 200,000 AstraZeneca doses in the Netherlands facing a similar fate.

Much of the world has yet to see enough doses to vaccinate even the most vulnerable. Across Africa, as of late last month, only 2.2 percent of people had received at least one dose, while the Netherlands had vaccinated well over half of its population. The Dutch government, which owns the doses, has said that for legal and logistical reasons they cannot be exported, despite criticism from Dutch doctors.

While vaccination programs always have some waste, even standard levels mean mind-boggling numbers of unused doses at the scale of global coronavirus vaccination. But just how many doses have already expired, or are about to, is unclear.

"There is no one who tracks expired doses systematically," said Prashant Yadav, an expert on health-care supply chains at the Center for Global Development, a think tank. Instead, information has trickled out in news reports and little-publicized official statements.

In Israel, 80,000 expiring Pfizer-BioNTech doses were set to be tossed at the end of July; 73,000 doses from various manufacturers have been disposed of in Poland; and 160,000 Sputnik V doses nearing expiration were returned from Slovakia to Russia, their final status unknown. In the United States, North Carolina alone is estimated to have 800,000 doses soon to expire.

According to data compiled by the World Health Organization, approximately 469,868 doses from various manufacturers had expired in Africa as of Aug. 9. "Most of the vaccines arriving have a very short expiration date," said Richard Mihigo, coordinator of immunization and vaccine development for the WHO's Africa arm.

The lack of global data masks the price tag. In the United States alone, estimates of total expired or close-to-expired doses run in the millions. With some vaccines costing as much as $20 a shot, the cost could run into many tens of millions of dollars, if not more.

The toll for human health may be even graver. "The doses we have aren't enough," said Lawrence Gostin, global health law professor at Georgetown University. "They're expiring, they're spoiling with electrical shortages, they're not being delivered to the population. It's a whole catastrophe."

Vaccines often degrade at a higher rate than many other drugs that can be stockpiled, such as Tamiflu, which can be stored for years, according to Jesse Goodman, a professor at the Georgetown School of Medicine and former chief scientist of the U.S. Food and Drug Administration.

As doses age, they "might not engender the same immune response," Goodman said, turning a strong, potentially lifesaving inoculation into a weakened dud. And mRNA vaccines, such as those developed by Pfizer and Moderna, are particularly fragile.

Expiration dates are set by the manufacturer and approved by local regulatory authorities. Many coronavirus vaccines were given initial emergency use authorization when only six months of data was available, resulting in cautiously short expiration dates.

In a statement to The Washington Post, the WHO said that unlike opened-vial wastage, where multi-dose vaccine vials were opened but could not be used before expiration, unopened vial wastage, such as expiry, was "avoidable." In general, the global health body said, it is recommended to keep all vaccine wastage to below 1 percent.

That may be no easy task. Data compiled by the global vaccine alliance Gavi on non-coronavirus vaccines shows wastage can often hit 10 percent, and sometimes far higher.

Marco Blanker, a doctor in the Dutch town of Zwolle, said he had to throw away 58 doses in one day in the spring due to no-shows amid negative publicity about the AstraZeneca vaccine.

"It was devastating for the team," he said. "We did all our best in the previous weeks to not have any spillage — we didn't lose a drop."

Blanker posted a photograph of the discarded doses on Twitter, sparking a public debate in the Netherlands. Soon other Dutch doctors teamed up to create an app to help redistribute the doses.

Demand in the Netherlands eventually dried up. The country is now 55 percent fully vaccinated and AstraZeneca is only recommended for certain age groups. So Blanker and other doctors such as Mook-Kanamori began looking for other nations that might accept the doses.

Namibia, a West African nation struggling for doses, looked like a good destination. There was even a Dutch doctor who said he was willing to fly them there himself, Mook-Kanamori said. But the Dutch government has stuck to the same position: The doses must be disposed of after they expire.

The Dutch Ministry of Health did not respond to a request for comment. The Netherlands has pledged to donate other vaccine doses, including 75,000 AstraZeneca doses to Namibia.

Even when doses do go to those in need, expiration dates can pose problems. Across Africa, most countries have tailored their rollouts around a three-to-four-month delivery window, Mihigo said. But shipping delays have forced some to contend with shorter periods.

Liberia had 15 days to distribute tens of thousands of AstraZeneca shots from the African Union. About 27,000 expired. "We just didn't have enough time," said the country's health minister, Wilhemina Jallah.

Other countries have gone a step further. In Malawi, the government burned almost 20,000 expired AstraZeneca doses in May, in what local officials said was a move to show the public that they would not receive expired doses. Some health authorities, such as the Palestinian Authority, have refused to accept doses they said were too close to expiration.

Expiration dates can change. The FDA last month extended the expiry for the Johnson & Johnson vaccine in the United States to six months from 4½ months. A representative of the Russian Direct Investment Fund said that they expected the expiration of Sputnik V to be increased from six months to one year. Such moves can help claw back doses.

Some experts hope to see Covax, the U.N.-backed vaccine-sharing mechanism, or bilateral deals help move vaccine doses to where they need to be before they expire. But finding a way to share doses is not really the problem, according to doctors like Mook-Kanamori.

"I can get 8,000 shots into an arm in Namibia next week, if there's a will," he explained. "The problem is that there is no will."