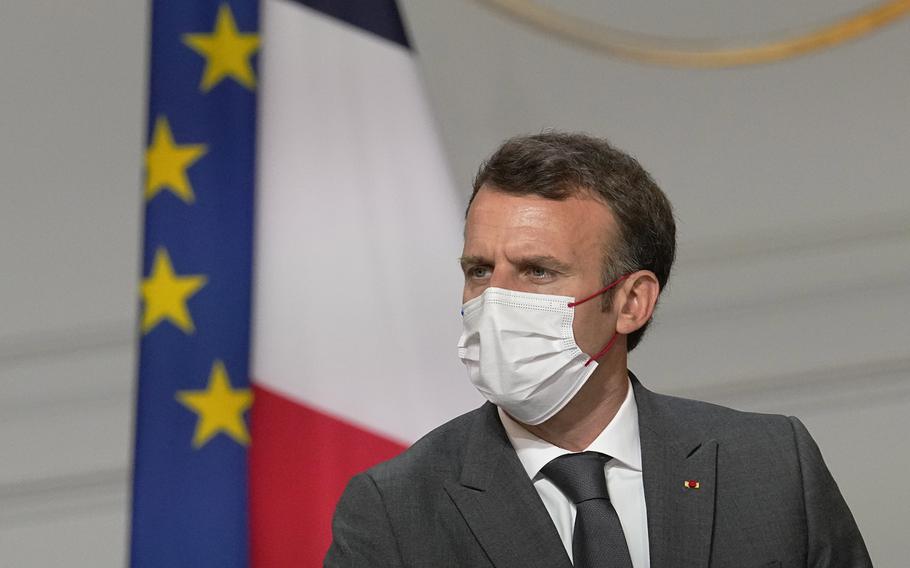 French President Emmanuel Macron has stepped up criticism of radical anti-vaccine demonstrators who oppose his push to boost vaccination across the country.

"I won't give in to their radical violence at all," Macron said in an interview with Paris Match magazine, according to excerpts made available online before the full article is published on Thursday. "Their attitude is a threat to democracy. They mix up everything."

"A few tens of thousands of people have lost their minds to such an extent that they are capable of saying we live in a dictatorship," Macron said. Anti-vaccine activists claim that government measures that make vaccination almost mandatory for those who wish to resume a normal life are oppressive.

The French president also accused some politicians whom he didn't name of being too soft on the movement.

Macron's comments come after a third consecutive weekend of demonstrations in major French cities against a government plan to impose a vaccine passport for people to access places such as restaurants and museums, as well as trains. Reporters covering the demonstrations have been physically attacked by anti-vaccine protesters, who also stormed vaccination centers, according to local media.

A poll published on Wednesday by Elabe showed only 37% of those surveyed supported the protests. Depending on the context, between 55% and 63% of people interviewed said they had no issue with presenting a health passport.

The passport, referred to as a health pass, includes data on coronavirus test results and vaccination status. The government also wants people who test positive to self-isolate, as well as mandatory vaccination for health care workers and sanctions on those who refuse to get vaccinated. Macron will end free tests in the fall for those who want to travel or attend events without getting shots.

The Elabe poll for Les Echos newspaper and Radio Classique also showed that 61% of those surveyed were in favor of compulsory vaccination, unchanged from a month ago. Two-thirds of French adults are fully vaccinated, according to government data.

Opponents of the health pass say the government measures infringe on their liberties and that vaccines haven't prevented a recent spike in infections propelled by the more contagious delta variant of the coronavirus.

France reported 26,829 new daily infections on Tuesday, about 5,000 more than the seven-day average but still far below this year's peak in early April of 84,999 cases. There were 44 daily COVID-related deaths on average over the last seven days. The jabs boom means that those vaccinated are less likely to develop serious symptoms if they're infected.