Mask mandates are coming back in the US, and tourists aren’t happy 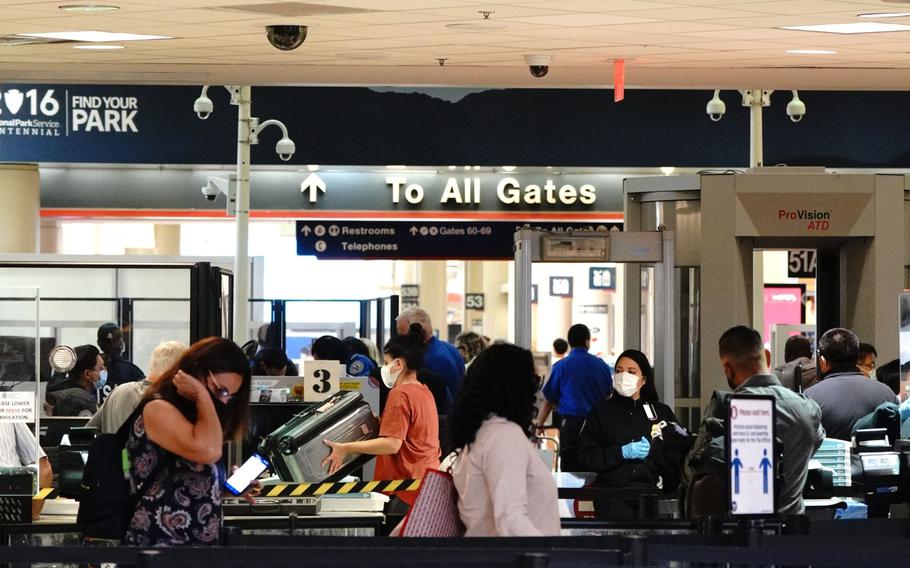 Mask requirements are popping back up again across the United States following new Centers for Disease Control and Prevention guidance that even vaccinated people should wear masks indoors in public in high-transmission communities.

Nevada quickly reinstalled a statewide mask mandate within hours of the CDC's Tuesday announcement, requiring that face coverings be worn indoors in public in counties with "substantial or high transmission" starting Friday. Twelve of Nevada's 17 counties fit that criteria, the state said.

That includes Clark County, home to Las Vegas, where the renewed mandate has raised questions about how it will impact its tourism industry, which had been on what was seen as an upward trajectory toward recovery from the pandemic.

Also Tuesday, the Democratic mayor of Kansas City, Mo., Quinton Lucas, said that in light of the CDC guidance, he would reinstate an indoor mask mandate in the city.

The move was sudden: Just two days earlier, on CBS's "Face the Nation," Lucas said that "at this point" mask mandates were unnecessary. In announcing the new mandate, Lucas said he would "provide further details in the morning."

The mandate in Nevada drew confusion and frustration on social media, with questions about what the sudden changes meant for businesses like nightclubs. It also left some tourists less excited about upcoming trips to Las Vegas, leading some to cancel their plans.

Amy Boike of Lakeville, Minn., had been planning to travel to Las Vegas at the end of August for a concert, but said that she would cancel her trip if she could get a refund for her tickets to the show, as her airfare and hotel were refundable.

"I don't want to wear a mask the whole time I am there," she said in a text message. "I don't want to spend all that money for a trip and then have to suffer through a mask."

Boike, 44, said that she was fully vaccinated and that it was "beyond frustrating" that the Nevada mandate includes vaccinated people. Echoing a question many had voiced since the CDC's announcement on Tuesday, she asked, "What's the point of the vaccine if we still have to wear a mask?"

Medical experts point to the effectiveness of the vaccines in preventing severe illness or death from COVID-19.

Rochelle Walensky, the CDC director, said that with the delta variant raging across the United States, especially in places with low vaccination rates, the new guidance was necessary. New cases in the United States have risen 63 percent in the past week, spiking in states like Louisiana, Mississippi and Arkansas, which are among the states with the lowest vaccination rates.

"It is not a welcome piece of news that masking is going to be a part of people's lives who have already been vaccinated," Walensky said. "This new guidance weighs heavily on me."

But the about-face from the CDC left some wondering how it could impact the many Americans who have yet to be vaccinated. Rep. Ashley Hinson (R-Iowa), said she was concerned that the guidance would "erode public trust in the three safe and effective American vaccines."

"We need to follow the science and encourage people to get vaccinated so that we can all safely return to our normal lives and put this pandemic in the past," she said in a statement.

Some local governments had put mask mandates back in place before the CDC's new guidance sent officials shuffling on Tuesday to react. Los Angeles County reinstalled its indoor mask mandate earlier this month, and St. Louis on Monday made masks required indoors regardless of vaccination status.

The Nevada Gaming Control Board reinforced the new mandate, telling casinos and other businesses it issues licenses to in a notice that it would "continue to ensure that best practices are used in the mitigation of COVID-19." The board reminded casinos and other licensees that they were required to have signs about where masks need to be worn.

In compliance with the mandate, MGM Resorts, the largest operator on the Las Vegas Strip, will require "all guests and visitors" to wear masks indoors in public areas starting Friday, a spokesman said in an email. MGM requires its employees to either be vaccinated or be tested regularly, the spokesman said.

Workers in Las Vegas, and throughout Clark County, had already been required to wear masks since the county enacted a mandate earlier this month, which excluded patrons.

Ahead of her trip to Las Vegas, Boike is planning to go to Boston, which she hopes staves off a mask mandate. The possibility of having to wear masks again widely was exasperating for her.