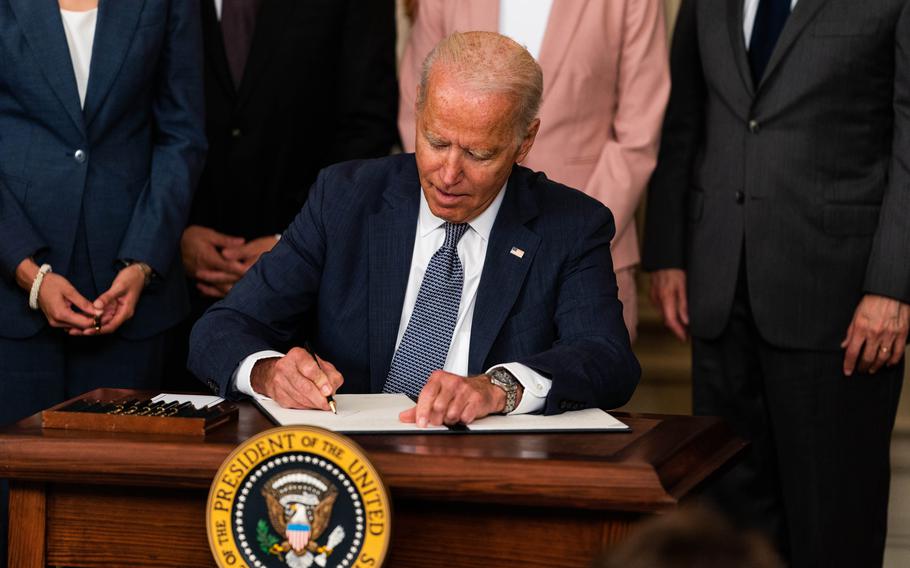 President Joe Biden delivers remarks and signs an executive order on promoting competition in the American economy in the State Dining Room of the White House on July 9, 2021. (Demetrius Freeman/The Washington Post)

WASHINGTON — President Joe Biden will announce Thursday that all federal employees will be required to be vaccinated against the coronavirus or face repeated testing mandates, a White House official said, a dramatic escalation of the administration’s effort to combat the spread of the delta variant.

The new rules will closely align with policies recently put in place for government officials in California and New York City, the person said, speaking on the condition of anonymity because they weren’t authorized to disclose the plan. The White House is not planning on firing government employees who aren’t vaccinated but will impose a number of restrictions on them as a way to encourage them to receive one of the vaccines that have received emergency-use authorization.

Another official cautioned that nothing is final until Biden announces it and the plan could change, adding that a policy review is underway. But Biden plans to make the policy announcement on Thursday, the official said.

The plan is part of a change in tack by the White House in recent days as the delta variant has spread markedly through parts of the United States, particularly among unvaccinated Americans. Public health experts have long said that getting at least 70% of the public vaccinated is the single most important tool in controlling the pandemic, but some parts of the United States have fallen far short of that target. And some authorities are urging an even higher rate of vaccinations now, given the increased virulence of the variant.

On Monday, California and New York City said they would require government employees to either be vaccinated or face repeated testing requirements, and Biden was asked Tuesday whether the federal government would impose similar requirements.

“That’s under consideration right now,” Biden said in response to a reporter’s question after an appearance at a government intelligence facility. “If you’re not vaccinated, you’re not nearly as smart as I thought you were.”

COVID-19 has begun yet another wave across the United States, with less than half of the country fully vaccinated. Some 163 million people are fully vaccinated. But after a surge in vaccinations in the first several months of 2021, rates have slowed in recent weeks. Biden has said he has no plans to reimpose school closures or other restrictions that went into place last year, but he has also said in recent days that changes need to be made to prevent the virus from picking up momentum yet again.

Many businesses, sporting events and entertainment venues have reopened across the country with few mask, vaccine or other requirements, a dynamic that has helped the virus’s latest surge.

Biden’s planned announcement about the federal workforce comes as other employers — albeit much smaller ones - are considering similar requirements.

The Equal Employment Opportunity Commission, which addresses workplace complaints about discrimination over race, religion, sex and other characteristics, issued guidance in May that said that employers could mandate vaccines for workers to work on-site, as long as they do it in ways that don’t run afoul of civil rights and disability statutes. And the Justice Department followed with a similar memo Monday that said that federal law does not prohibit public and private employers from requiring a vaccine, even if it has been approved only for emergency use by the Food and Drug Administration.

Recent court rulings, in cases filed by groups opposed to mandates, have upheld these requirements, too.

But many companies so far have shied away from vaccine mandates, opting instead for softer guidance urging or recommending the vaccine.

The tide may be turning, as the spike in cases from the delta variant begins to threaten hopes for a return to anything resembling a pre-pandemic normal.

There are more than 4 million federal employees, a figure that includes civilian workers, members of the military and members of the U.S. Postal Service, according to recent estimates, making the government the country’s largest employer. When including the vast ranks of federal contractors and grant workers, that number is closer to 10 million. But it was not immediately clear who the potential vaccine requirements in discussion would apply to.

The Department of Veterans Affairs, which runs hospitals and clinics around the country, announced Monday that it would mandate coronavirus vaccines for more than 100,000 front-line health-care workers, making it the first federal agency to do so.

Also on Tuesday, the Centers for Disease Control and Prevention changed its guidelines, urging vaccinated people to begin wearing masks again indoors, if they are in areas with high transmissibility or live with vulnerable family members — a reflection of the greater threat posed by the variant than earlier iterations of the virus.

The White House told its employees in a staff-wide email in the afternoon that it was requiring everyone, regardless of vaccination status, to wear masks while on the premises, effective immediately.

The email, viewed by The Washington Post, noted that Washington currently has a “substantial” level of community transmission and would thus qualify for the revised CDC mask guidelines.

Covered VA employees have until Aug. 22 to be past the waiting period after their final dose, if they receive a vaccine requiring two doses.

“I feel quite strongly that I should do everything in my power to promote patient safety,” Veterans Affairs Secretary Denis McDonough said at a news conference, noting that covid-19 hospitalizations are up 37% at VA facilities. “These are the most patient-facing cohort of personnel that we have.”

He said that employees may ask for an exemption for medical or religious reasons, but for employees who do not qualify and refuse vaccination, “we reserve the right that that would come with disciplinary impact up to and including expulsion from federal service.”

McDonough said that the department is reviewing its authority to expand the mandate to other employees, naming benefits specialists who meet with patients as a possible next category.

Defense officials did not respond to questions Tuesday about whether the Pentagon is considering requiring vaccinations for employees.

Previously, the Defense Department has encouraged service members to consult with their doctors and consider vaccination but declined to require it.

The mandates are likely to draw mixed reactions from the vast federal workforce, some 85% of whom live outside of Washington, many in conservative areas of the country.

Within federal law enforcement agencies, there is already a great deal of opposition to the idea, said Larry Cosme, national president of the Federal Law Enforcement Officers Association, which represents over 26,000 members.

“There will be a lot of pushback; it’s going to be an avalanche,” he said. “No one should be mandated to have a medical procedure. We do encourage folks to get vaccinated, but our position is that’s someone’s individual choice.”

Other federal employee unions said they supported it.

“We fully endorse a vaccine mandate,” said Paul Shearon, president of the International Federation of Professional and Technical Engineers, which represents some 25,000 federal workers at agencies such as NASA and the Defense Department. “We’re in the middle of a pandemic, over 600,000 people are dead, and we don’t want any more of our members dying.”