The Biden administration on Thursday announced the formation of "surge response" teams intended to combat the fast-moving delta variant of the coronavirus by deploying additional expertise and supplies to hot spots.

"These are dedicated teams working with communities at higher risk for, or already experiencing, outbreaks due to the spread of the delta variant and their low vaccination rate," White House coronavirus coordinator Jeff Zients told reporters at a news briefing.

The delta variant now represents about one-quarter of all confirmed coronavirus cases in the United States, and is now the predominant variant in Arkansas, Colorado, Missouri and Utah, say public health experts. "In some regions of the country, nearly one in two sequences is the delta variant," said Centers for Disease Control and Prevention Director Rochelle Walensky.

The White House-coordinated teams will include a mix of virtual support and on-the-ground personnel, helping deploy additional supplies as requested by local officials, such as testing or therapeutics. Staff will come from the CDC, the Federal Emergency Management Agency and the Office of the Assistant Secretary for Preparedness and Response in the Department of Health and Human Services. The White House also may ramp up paid promotions about the benefits of vaccination in areas that officials deem high risk. All the vaccines authorized in the United States have been shown to be highly protective against the virus, preventing severe illness and death from delta.

CDC already has deployed a response team to Mesa County, Colo., which has seen a surge of cases linked to the delta variant. That team is helping support state officials' efforts to investigate the spread of the outbreak. Another team is preparing to deploy to Missouri.

White House officials on Thursday reiterated their concern about the significant variation in local vaccination rates, with Walensky warning that fewer than 30% of residents have been vaccinated in about 1,000 counties. "These communities, primarily in the Southeast and Midwest, are our most vulnerable," she said.

Walensky also cited preliminary data indicating that 99.5% of coronavirus deaths in the past six months were in unvaccinated people.

Biden administration officials said they would continue to pursue tactics to boost immunizations, including arranging pop-up vaccination sites and deploying mobile vaccination clinics. Biden had called for 70% of adults to have received one shot of vaccine by July 4, a goal that the nation will narrowly miss. About 66% of adults have received at least one shot so far.

"We'll double down on these efforts as we continue to vaccinate millions of people across the summer months," added Zients. "This whole-of-government, wartime response continues."

Ahead of the holiday weekend, public health experts said they are concerned about the delta variant's rapid spread but continue to tailor their advice to local conditions.

"In Palo Alto, California, I think there is a high degree of safety vis-a-vis covid-19 transmission in outdoor settings, and I have no qualms about joining gatherings," said Stanley Deresinski, an infectious-disease doctor at Stanford Medicine. "In Modoc County, California, where only [about 30] percent of the population has been fully vaccinated and where, despite its rural nature, cases continue to occur, I think I would be careful in the presence of others." 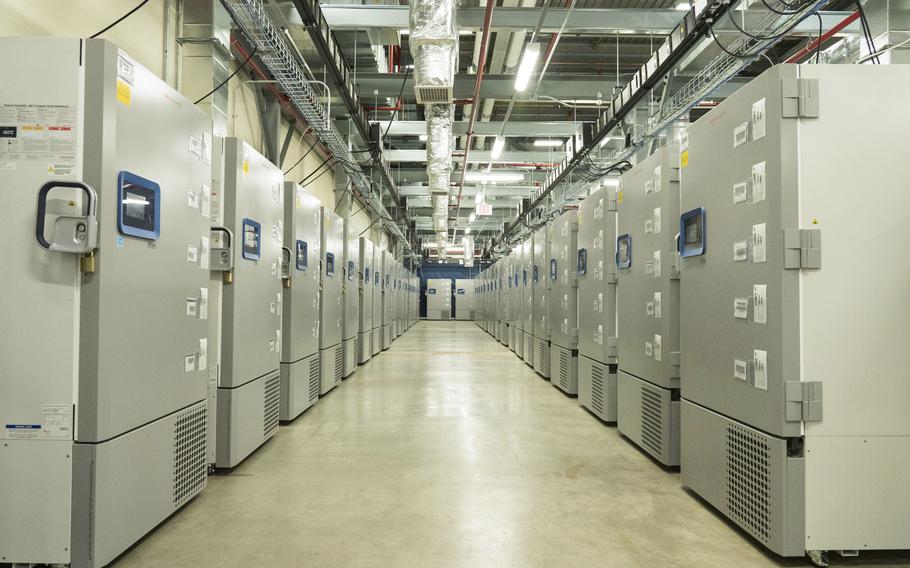 Freezers used to hold doses of the Pfizer coronavirus vaccine at minus-70 degrees Celsius at the Kalamazoo facility. (Evan Cobb/For The Washington Post)