The number of new coronavirus cases increased across Europe for the first time in 10 weeks, the World Health Organization said Thursday, ending a stretch that had raised hopes the pandemic would recede as vaccinations were on the rise.

New infections jumped 10% during the past week in the 53 countries that make up the WHO European region, the agency's regional director for Europe, Hans Kluge, said in a briefing.

He attributed the rise to increased mixing, summer travel and the rapid spread of the more contagious delta variant first identified in India.

"This is taking place in the context of a rapidly evolving situation," Kluge said. "And in a region where, despite tremendous efforts by member states, millions remain unvaccinated."

At least 63% of people in the European region — which stretches from Portugal in the west to Russia's eastern border — are still waiting for a first dose of a coronavirus vaccine, Kluge said. By August, the delta variant is expected to become dominant across Europe, as restrictions are lifted across the continent.

The variant, which is highly transmissible, "is already translating into increased hospitalizations and deaths," Kluge said.

But just 14 new virus-related deaths were recorded Wednesday, according to Reuters, down from 23 the day before. About half of Britain's population is fully vaccinated, according to Our World in Data, which tracks publicly available figures.

The crowd was the largest in Britain since the pandemic began, according to the AP, which quoted German Interior Minister Horst Seehofer as saying the decision to allow spectators was "absolutely irresponsible."

The WHO Thursday also launched a tool it said would help monitor the pandemic environment and related restrictions in cities hosting Euro 2020 matches over coming days. Local officials should pay more attention to the movement of spectators in host cities, the agency said, including mass transit and postgame gatherings.

When asked whether the matches were acting as potential "super spreader" events, Kluge said he could not rule it out. 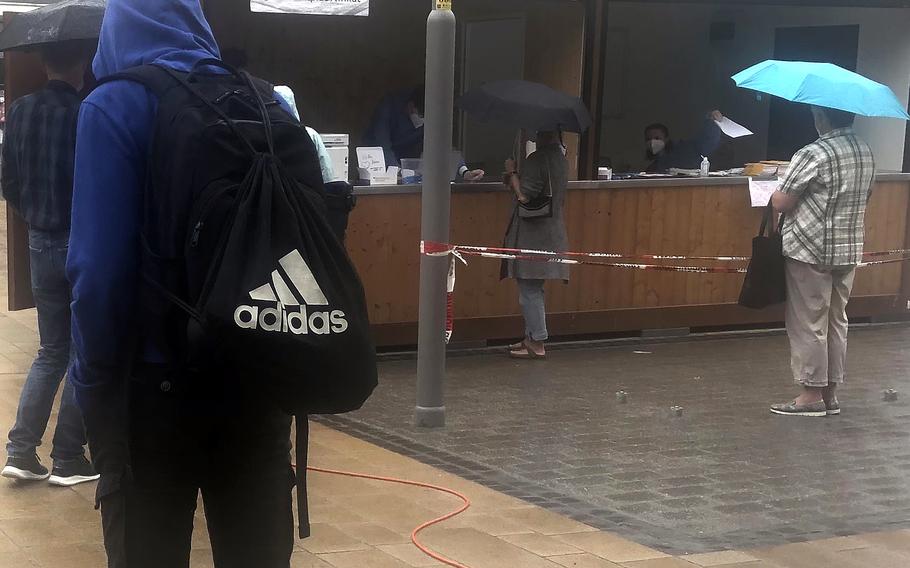 Buy Photo
People line up in the rain outside a pharmacy on Schillerplatz in Kaiserslautern, Germany, June 22, 2021, to get digital COVID-19 vaccination certificates. (Karin Zeitvogel/Stars and Stripes)