The new ‘Delta-plus’ coronavirus variant has been identified; what does that mean? 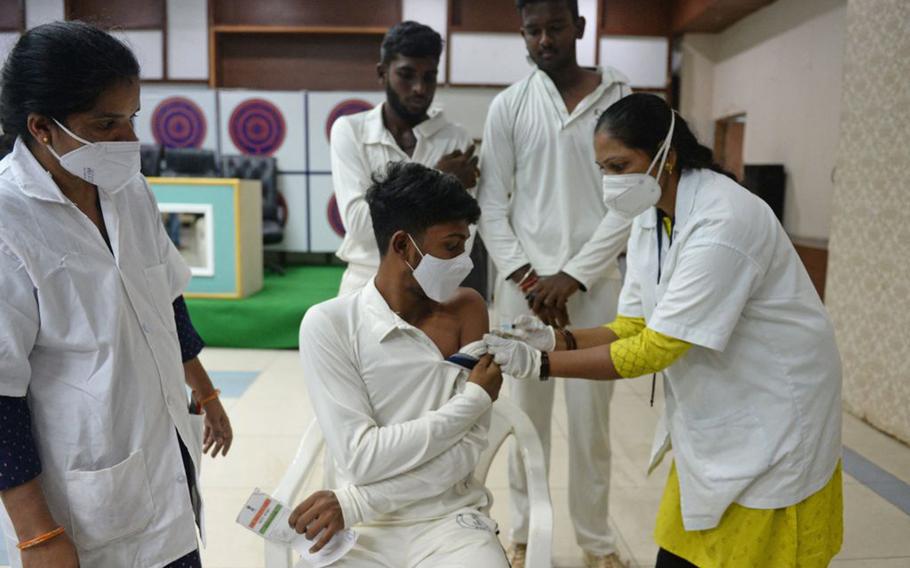 A health worker inoculates a young cricketer with the jab of Covishield vaccine against the COVID-19 coronavirus during a vaccination drive at Rajiv Gandhi International Cricket Stadium in Hyderabad on June 28, 2021. (Noah Seelam, AFP via Getty Images/TNS)

(Tribune News Service) The Delta variant of the coronavirus has spawned a variant of its own that has gained considerable attention since being dubbed “Delta-plus” in India.

It is slightly different from the original Delta variant that also was first identified in India.

The original Delta variant is perhaps twice as transmissible as other strains of the coronavirus — meaning unvaccinated people are more likely to become infected if they are exposed to it. The United Kingdom was forced to delay a new phase of reopening its economy as the variant began to spread among unvaccinated people there, causing an uptick in cases and hospitalizations.

Delta’s contagiousness is obvious cause for concern. But what about Delta-plus?

Statements issued by the Indian government say the characteristics of Delta-plus also include increased transmissibility. But it’s unclear whether the strain is more transmissible than the regular Delta variant.

Scientists in California say there isn’t enough evidence to suggest that Delta-plus is any more problematic than the original Delta.

“It has a good name,” said Dr. Benjamin Pinsky, director of the Clinical Virology Laboratory at Stanford University. But there’s not much information available to suggest it’s worse than anything else that’s circulating, and more research is needed, he said.

“It sounds like just another variant that’s no better, no worse, than the regular Delta variant, and it’s a little unclear why everybody’s pushing on it,” said Dr. George Rutherford, a UC San Francisco epidemiologist. “I don’t see that this is a big, big problem right now. I mean, it may get worked up; it may turn out to be a bigger problem. But there’s certainly nothing that I’m seeing that gives me undue concern right now.”

Dr. Monica Gandhi, an infectious-diseases expert at UC San Francisco, noted that the lack of data on Delta-plus is due in part to limited genomic surveillance in India because of funding shortages.

“I don’t think you can tell yet, by the data we have, if it’s more transmissible,” she said.

While the world continues to worry about ever more contagious variants, some experts say that at a certain point, there will be a limit to how transmissible the coronavirus can become. Scientists do not expect that this coronavirus will ever be as transmissible as measles, one of the world’s most contagious viruses.

“I know it keeps on seeming like there’s more and more, and so it’s certainly understandable why people are like, ‘Why doesn’t it stop?’” Gandhi said. “Once you tamp down transmission, it really will stop accumulating these mutations.... That is the reason why we want to, of course, have global vaccine equity: to stop transmission.”

The rise of more transmissible variants is understandably concerning to scientists and public health experts. With the initial coronavirus strains, it might take 71% of the population to be immune for a region to reach “herd immunity,” in which ongoing transmission of the virus is interrupted, Rutherford said. But a more transmissible version, such as the Delta variant, would increase the herd-immunity threshold, perhaps to 84%, he said.

“Viruses mutate all the time,” he added.

As far as Delta-plus is concerned, “they really haven’t figured out whether it’s that much worse or whether it really does represent a new threat,” Rutherford said.

Health officials have already been sounding warning bells about the original Delta variant, which has gained a significant foothold in some areas of the United States.

From May 9 to May 22, the Delta variant accounted for fewer than 3% of genomically sequenced coronavirus samples nationwide. But from June 6 to June 19, that proportion rose to more than 20%, according to figures presented last week.

Dr. Anthony Fauci, the U.S. government’s top infectious-disease expert, called the strain “currently the greatest threat in the U.S. to our attempt to eliminate COVID-19.”

The proportion of coronavirus cases caused by the Delta variant has increased recently in California, where it is known to have infected 372 people, according to figures from the state Department of Public Health.

The data show that the Delta variant is increasing its proportion of California’s coronavirus cases, which are the lowest they’ve been since the first few weeks of the pandemic, 15 months ago.

In May, just 4.7% of analyzed coronavirus cases were Delta, and it was the fourth-most identified variant in California. That month, Alpha accounted for the most genomically sequenced cases in the state, at 58.4%, while Gamma was identified in 10.1% of cases.

A variant first identified in New York, known as B.1.526.1 (no Greek letter has been assigned to it), was identified in 5% of analyzed cases.

The nation’s most populous county, Los Angeles, has confirmed 123 cases of the Delta variant — 49 of them among residents of Palmdale and Lancaster.

L.A. County Public Health Director Barbara Ferrer said that number “has happened between the middle of April and now,” so “you can see that we’ve had a lot of increase in the circulation of the Delta variant.”

But, she continued, “if you are fully vaccinated, you have a lot of protection.”

“And for the very small numbers of people that may end up in fact with a breakthrough vaccination case, they really did not have serious illness,” Ferrer said.