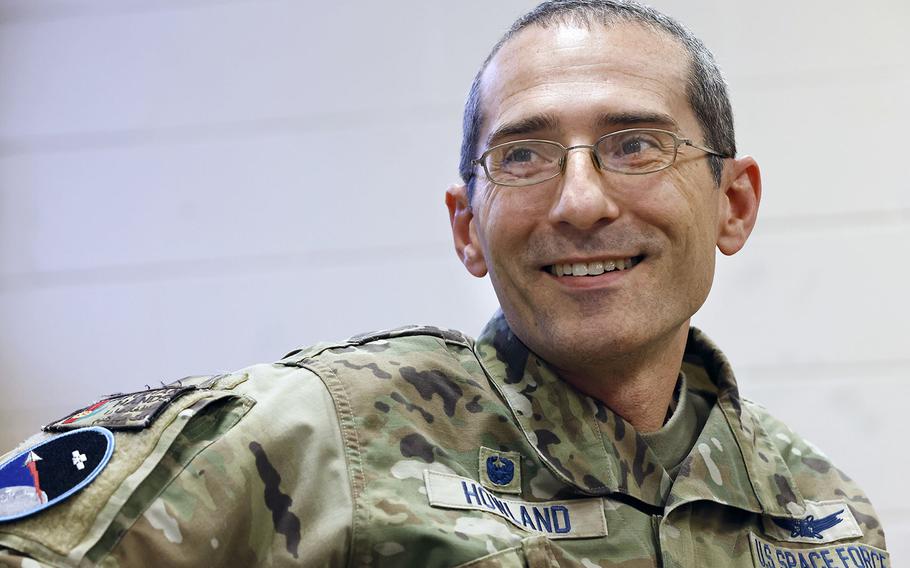 In an interview at Joint Base McGuire-Dix-Lakehurst in Burlington County, Lt. Col. Adam Howland describes his work with the 11,100 Afghan evacuees who are living on the base at “Liberty Village.” He served in Afghanistan and speaks Dari, one of the two national languages. (Elizabeth Robertson, The Philadelphia Inquirer/TNS)

(Tribune News Service) — A cold wind ripped between the brick buildings of “Liberty Village,” the enclave of Afghan evacuees at Joint Base McGuire-Dix-Lakehurst, but inside the gym it was warm and rocking.

Two soldiers knocked a volleyball across a net with a couple of Afghan children. A half-circle of women laughed and talked on the other side of the court. Children ran in all directions. And everyone wanted to practice their English.

Lt. Col. Adam Howland became an attraction the moment he stepped through the door and onto the hardwood floor — an American soldier who speaks Dari, one of Afghanistan’s two national languages. He was formally trained as an expert on the culture and served in-country as a bridge between people and agencies.

Marzia, a girl of perhaps 8, rushed to show him her homemade ID badge, on which she designated herself a volunteer interpreter. Beside her, a small boy vied for Howland’s attention.

“How are you doing, little guy?” Howland asked in Dari.

“Little guy?” the child shot back in mock anger. “You’re a little guy!”

As the lead culture adviser, Howland, 41, spent the last three months as a central point of contact and problem-solving for 11,100 Afghans, all awaiting resettlement in communities across the United States.

Liberty Village is roughly the same size as the permanent population of Ocean City, N.J. And three times bigger than Cape May. For practical purposes it’s a town that’s located on a military base, home to 3,377 families.

The brick housing is supplemented by what are commonly called tents, though those structures are hardened and more resilient than canvas.

Half the Afghans here are children, and 1,400 of those are between ages 5 and 12. Several couples have gotten married. More than 30 babies have been born, and about 300 women are pregnant.

Amid the chaotic evacuation that occurred as Afghanistan fell to the Taliban in August, the base became one of eight U.S. military installations to serve as “safe havens.” Together they now house about 50,000 Afghans.

The federal government wants to quickly move people off the bases and into permanent houses, to get them started on forging new American lives. But that movement, while picking up, continues to be hampered by a tight housing market — people can’t leave if there’s nowhere to go. 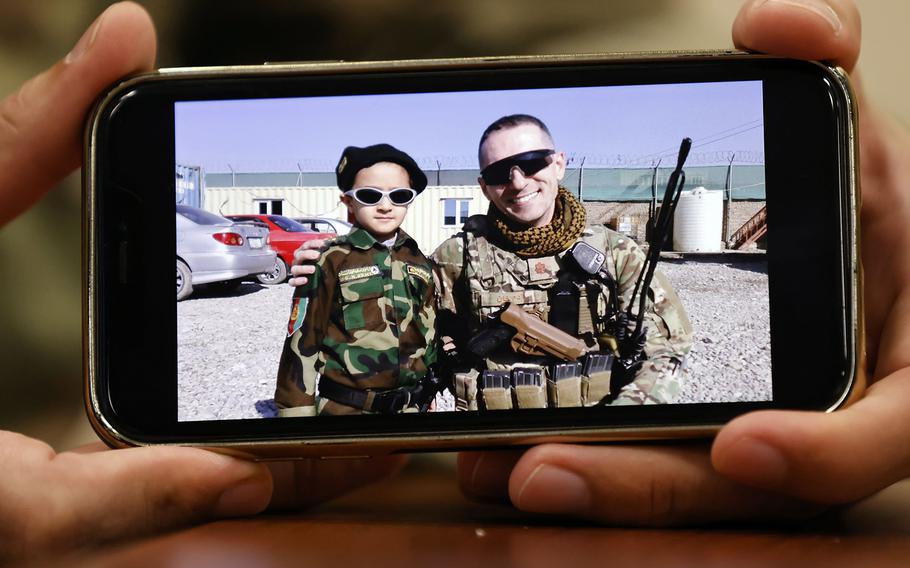 United States Space Force Lt. Co. Adam Howland displays a photo on his cell phone, taken in 2015, of him and a boy in Afghanistan. (Elizabeth Robertson, The Philadelphia Inquirer/TNS)

Colder weather is setting in as fall departs.

And Howland was leaving too, last week wrapping up an assignment where he essentially served as the liaison between the military and the evacuees, charged with helping each side manage the needs, wants and abilities of the other.

He was returning to his home station at Peterson Space Force Base in Colorado Springs, Colo., where he’s commander of the 319th Combat Training Squadron. There was no immediate word on a replacement. Howland initially was commissioned into the service through the ROTC program at Purdue University in Indiana, from where he graduated with a sociology degree in 2005.

“He was all ears when it came to the problems people face on the base,” said Hili Chakhansuri, a former Afghanistan government official who recently left the village for resettlement in Oklahoma City. “And he was doing his best to come up with whatever solution he could.”

The base generally has been off-limits to news reporters seeking to write about the lives of the evacuees. Department of Homeland Security officials allowed The Inquirer to speak to Howland and tour the village with him, but not to interview or take photographs of the people who live there.

Back in 2014, Howland was chosen for a military program called Afghanistan-Pakistan Hands, which sought to develop cultural experts for those countries. As an “AfPak Hand,” he was taught to speak Dari, then sent to Afghanistan during deployments from 2015 to 2018.

He served as a cultural-and-language connector between Afghans and U.S. and NATO troops. That included specific war duties, but also programs intended to better lives and futures. He helped set up the Afghan equivalent of the Boy and Girl Scouts, so children could have fun learning scouting skills.

An enduring memory centers not on warfare but on youth: One day, driving onto a base, he was greeted by a little boy dressed in Afghan military fatigues — who promptly snapped off a salute. It felt like progress.

When Howland walks through Liberty Village — government officials hate when people call it a “camp” — everyone wants a word, the topics ranging from family to health care to soccer to social media to the price of cars.

“Sometimes they don’t know who to talk to, or feel they’re getting the runaround, so they come to the familiar face and listening ear,” Howland said. “My [work] is talking to people, helping them understand where they are in resettlement. Answering their questions. Being their advocate.”

People fear for the safety of their families in Afghanistan. One woman approached Howland in tears last week, feeling helpless to aid her loved ones.

The Afghans on the South Jersey base belong to different ethnicities, social classes, and religious sects. They come from villages and cities. Some have multiple university degrees and others never saw a flush toilet until they reached the United States.

At other bases, not all has been peaceful.

At Fort McCoy in Wisconsin, one evacuee was charged with assaulting and choking his wife, and another man was charged with committing sexual crimes against minors. Fort Bliss officials said a female U.S. service member was assaulted by a group of male evacuees at the Doña Ana Complex in New Mexico.

Department of Homeland Security officials did not answer a specific question about whether any evacuees at the South Jersey base have been charged with crimes. Task Force Liberty DHS spokesperson Alvin Phillips responded, “All incidents of suspected criminal behavior at safe havens are referred to law enforcement for appropriate action.”

In their homeland, some evacuees were doctors, soldiers, barbers, civil engineers, cooks, and internet-technology specialists.

Here, some seek specific information to help them create a future: Where can I get study materials to take the pharmacist’s exam? How can I get a copy of the driver’s license test for the state where I’m being resettled?

“What I get from our guests is an extreme amount of optimism about what’s next,” Howland said. “They occupy their time moving forward.”

Everyone wants to know when they can leave and where they’ll be going. People who have left the base say they grew weary of waiting in lines for even the smallest convenience, like a cup of tea.

It’s uncertain when everyone will leave Liberty Village, when its operation will conclude.