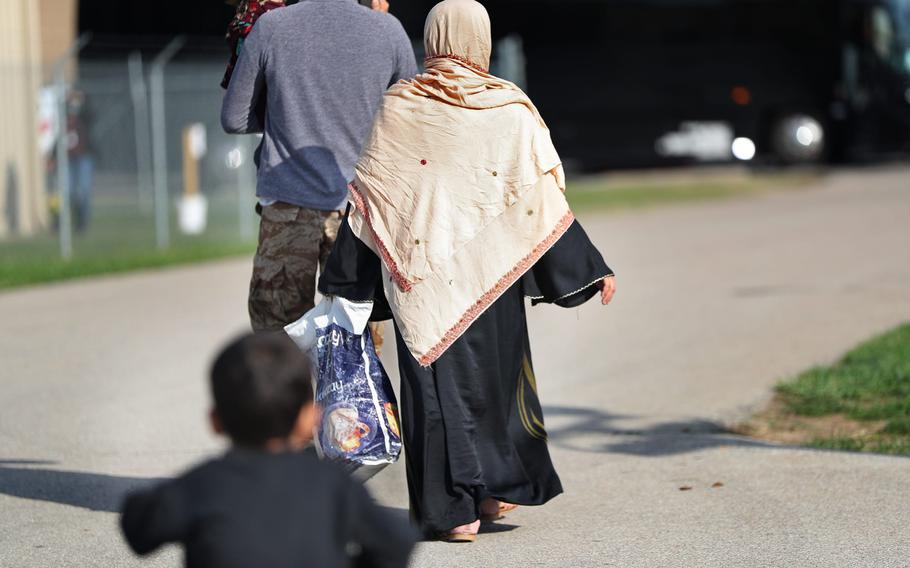 An Afghan family walks to a bus to take them back to their community at the Operation Allies Welcome Afghan evacuees settlement Thursday, Oct. 14, 2021 at Camp Atterbury in Edinburgh, IN. (Kelly Wilkinson, IndyStar/TNS)

"It has been a fantastic team effort" helping Afghan evacuees get "from a pretty chaotic situation to one where they have hope for the future," Col. Mike Grundman, Camp Atterbury's installation commander, told reporters in a media update Tuesday.

The "safe haven" is one of eight Department of Homeland Security-designated sites across the country helping provide temporary housing to those who escaped the sudden Taliban takeover in Afghanistan. Many are Afghan citizens who served as translators and advisers to the U.S. Army during the 20-year war in Afghanistan.

To date, more than 82,000 Afghan evacuees have arrived in the U.S. across the various sites, Aaron Batt, federal coordinator for the Dept. of Homeland Security, said Tuesday.

"We have never on Hoosier soil carried out something of this size and scope," Gov. Eric Holcomb said Tuesday.

About half of Camp Atterbury's population has resettled across the country, but about 4,100 people still remain there. In Indiana, the operation is both unprecedented — and emotional.

"My journey was long and scary," Nahid Sharifi told reporters. She's emotional thinking about the family members she separated from in Afghanistan, but she is eager to resettle and study at Indiana University in Bloomington.

"I'm very excited (to) start my new life in Indiana," Sharifi said. "People in the United States have the heart of gold."

The base isn't planning on taking in any more evacuees, officials said, and they hope to have everyone resettled by the end of the year — though the timeline could change as the holidays approach.