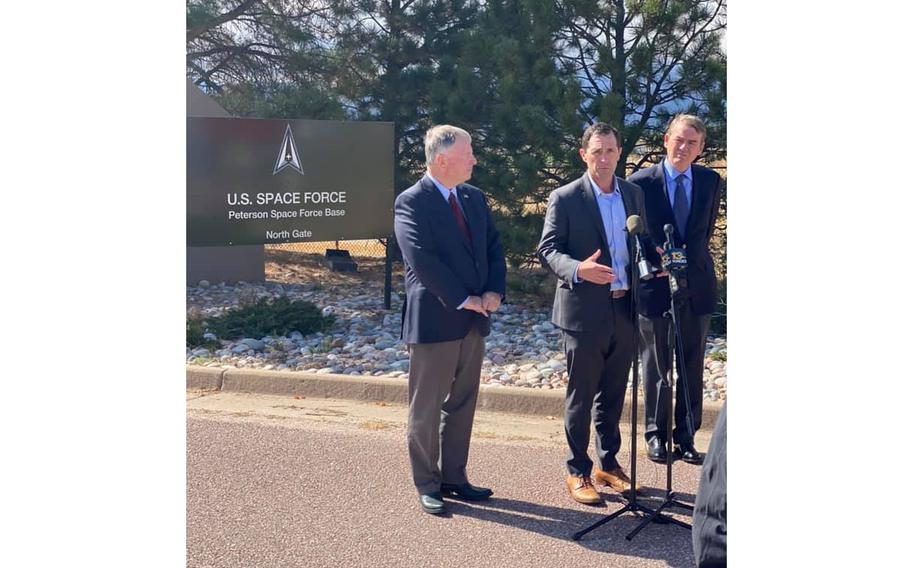 From right, Rep. Doug Lamborn, R-Colo., Rep. Jason Crow and Sen. Michael Bennet, both D-Colo., speak outside of Peterson Space Force Base, Colo., on Thursday after touring the base and meeting with officials. The lawmakers oppose the move of U.S. Space Command from Peterson to Redstone Arsenal, Ala., which was announced in January under former President Donald Trump. (Photo provided by Rep. Jason Crow’s office)

Two reviews into the Air Force’s decision to move U.S. Space Command from Colorado to Alabama should be out by spring 2022, but Colorado lawmakers are asking for the investigations to be expedited before taxpayer money is spent on the relocation.

Sen. Michael Bennet and Rep. Jason Crow, both D-Colo., told reporters Monday that moving Space Command would jeopardize national security because of the buildup of resources and personnel already located at bases in their state.

“It is the nexus of national security space operations for the intelligence community and the Department of Defense, and it's why, from a national security perspective, Colorado is the most strategic choice by far for U.S. Space Command,” Bennet said after he and Crow visited several military bases across Colorado.

Former Air Force Secretary Barbara Barrett announced in January — as former President Donald Trump’s time in office waned — the decision to move Space Command from its temporary headquarters at Peterson to a permanent home at Redstone Arsenal in Alabama.

Space Command, which operated from 1985 to 2002, was reestablished in 2019 just months before the newest military service branch, Space Force, was founded. It is a joint, combatant command that oversees the military’s various space-based infrastructure and operations.

Rep. Doug Lamborn, R-Colo., has joined in the effort to review the decision, which has since been called politically motivated. Trump was elected as a Republican, and Alabama is traditionally a stronghold for the party.

The lawmakers’ requests to review the decision were accepted by the Government Accountability Office and the Defense Department inspector general. Both offices said the reviews are ongoing. GAO officials confirmed the agency’s report is scheduled to be completed by spring and they said they continue to keep lawmakers informed of their progress.

The Defense Department Inspector General’s Office said they have not received a request from Crow to expedite their work. However, Crow said he has made his requests through private meetings and public testimony with Defense Secretary Lloyd Austin and Air Force officials.

“There are many indications that then President Trump overrode [the Air Force] process and put his thumb on the scale in favor of one location, which of course would be inconsistent with our national security and inconsistent with long-standing Department of Defense protocol,” Crow said. “That's what these two investigations are intended to do, to determine whether or not that occurred, and if it did, of course we need to revisit that process and go through it the right way.”

Crow and Lamborn also had an amendment added to the House version of the 2022 National Defense Authorization Act that would postpone any efforts to move Space Command until the two reviews are complete. The Senate has yet to pass its draft of the NDAA, which is annual legislation that creates a budget and updates policies for the Defense Department.

The amendment “is designed to further encourage expedited movement of that investigation because the command cannot spend money for a move until those investigations are complete,” Crow said.

As Crow and Bennet toured military bases in Colorado during the last week, including Peterson, Schriever Space Force Base and Buckley Space Force Base, they said military officials did not offer opinions on the move to Alabama but did answer questions about what is needed for the success of Space Command’s mission.

“One of the themes that came up is human capital,” Crow said. “Colorado has that talent. We have that ecosystem. The people live here, they have families here, they have their homes here.”

The Air Force has said the move to Alabama is contingent on a required environmental impact study, which could take until about 2023 to complete.