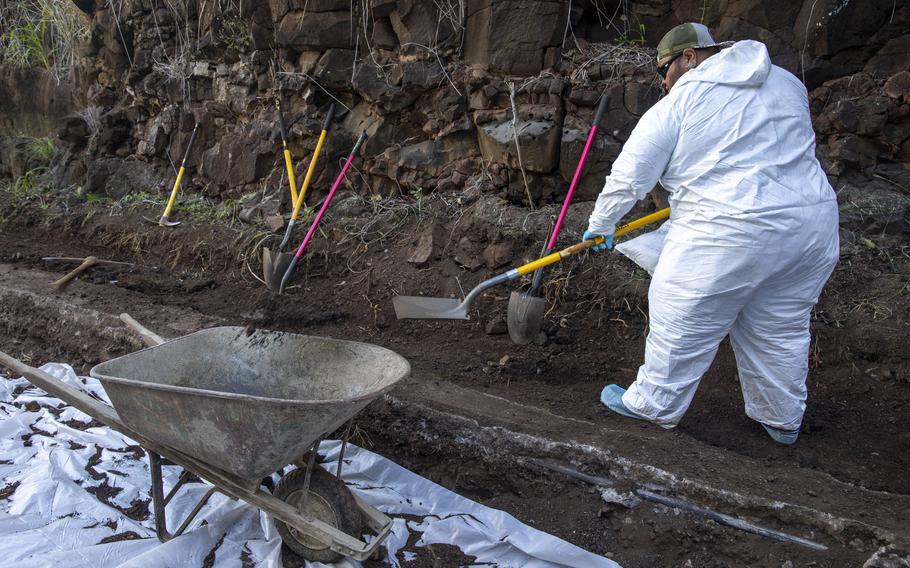 (Tribune News Service) — Federal and state environmental regulators Monday ducked out of a Honolulu Board of Water Supply meeting early, leaving the board and community members frustrated that they couldn't get more answers to questions they have about a recent spill of toxic fire suppressant chemicals at Red Hill and a host of other issues relating to the Navy's underground fuel facility that is being shut down.

The state Department of Health and U.S. Environmental Protection Agency were on the BWS' meeting agenda to discuss safe thresholds for certain contaminants in groundwater and drinking water and November's spill of an estimated 1, 300 gallons of aqueous film-­forming foam, which the Navy keeps on hand in the event of a fuel fire.

BWS officials expressed hope that DOH officials would attend the meeting in downtown Honolulu in person. Instead, four DOH officials attended virtually via Zoom and filled most of two hours going over lengthy technical presentations before cutting out, along with four EPA officials, at 4 p.m.

Members of the Water Board tried to cut short the presentations and said they were disappointed that EPA and DOH officials hadn't allowed for more time to answer questions or listen to testimony from the community.

"I think it is really important for you folks to hear from the community members who have taken time out of their busy schedules in order to be here today to testify," Kapua Sproat, vice chair of the BWS' board of directors, told Alison Fong, an EPA assistant director who joined the meeting from California, before she logged out.

Most of the community members who spent the next hour testifying before the BWS also expressed frustration.

"It was extremely disrespectful for the EPA and the DOH to walk out," said Cassandra Chee. She said that she felt that the regulators hadn't been very transparent since 2021's fuel spills at Red Hill contaminated the Navy's drinking water system.

While DOH and EPA officials say they have spent an enormous amount of time and resources dealing with Red Hill over the past year, there have been few opportunities for public engagement.

Kristina Baehr, an attorney representing military families who were sickened by 2021's water contamination, also testified at the meeting, saying that she had hoped to ask DOH officials whether they had been aware that the Navy was discarding samples collected from military homes in the early days of 2021's emergency without testing them for petroleum.

BWS Chief Engineer and Manager Ernie Lau, who in recent days has joined Red Hill protesters, said that he hoped DOH and EPA could return for the next meeting in January.

Amid the furor, DOH and EPA officials did provide more clarity on specific contamination concerns related to Red Hill.

In August, BWS reported that it had detected petroleum-related chemicals in a monitoring well in Moanalua Valley, elevating concerns that fuel contamination from the Navy's Red Hill facility may be traveling through the aquifer and putting a major source of drinking water for southern Oahu at risk. The test results were particularly worrisome because they indicated that contaminants could be migrating in an unanticipated direction.

But Roger Brewer, a senior environmental scientist with DOH, said Monday that the detections at the DH-43 monitoring well were likely unrelated to Red Hill. He said that the trace levels of oil and polycyclic aromatic hydrocarbons that were detected in the well likely came from the well itself, which is old and in an urban area. Brewer said the source could be algae or sediment in the well or contaminants contained in runoff.

He said the detections don't pose a health risk to residents. The contamination was found in a well that monitors groundwater, not a well that supplies drinking water.

EPA and DOH officials also briefed the BWS on health risks and regulatory issues surrounding PFAS, so-called forever chemicals that are slow to degrade in the environment and have spurred heightened concerns about their health risks, particularly with long-term chronic exposure. The Navy's recent spill of AFFF, which contains the chemicals, has elevated concerns that the PFAS could migrate into the groundwater.

PFAS are found throughout common products, such as cookware, construction materials, lab and medical equipment, electronics, certain apparel and pharmaceuticals. They are so ubiquitous that scientists say the chemicals can be detected in the bodies of more than 95% of Americans.

The EPA has grown increasingly concerned about the health risks posed by the chemicals, and earlier this year lowered the health risk thresholds for the chemicals in drinking water to close to zero. The level had previously been set at 70 parts per trillion.

Environmental regulators are requiring that the Navy now test monitoring wells for the chemicals for at least six months due to the AFFF spill. They're also requiring additional testing relating to trace levels that were detected in 2021 in the Navy's Red Hill shaft. Early this year DOH officials said that they didn't believe the detections were related to the Red Hill fuel leak that contaminated the drinking water and that they could have come from diving equipment. But DOH said Monday that it was requiring the Navy to conduct further testing "out of an abundance of caution."