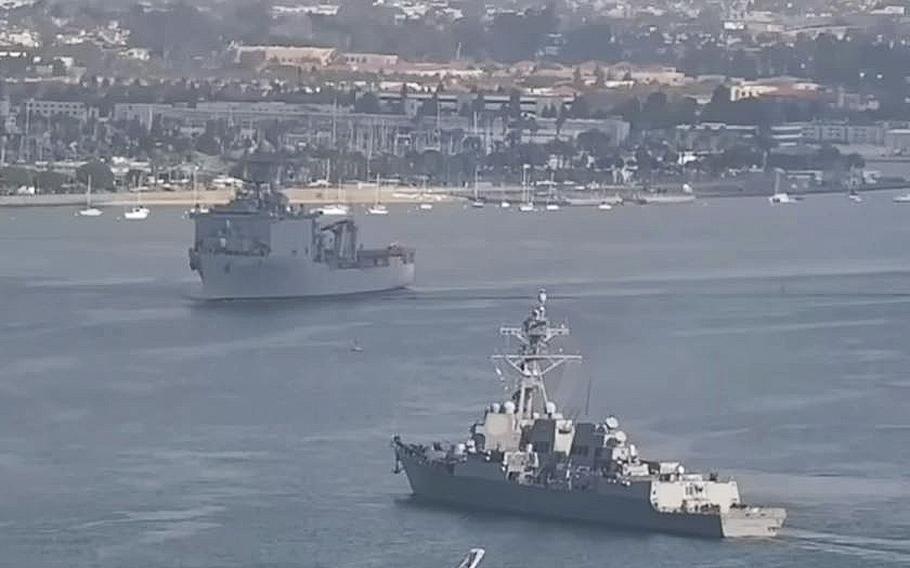 (Tribune News Service) — San Diego is home to about 60 U.S. Navy warships, so their comings and goings in and out of the harbor rarely make news. That changed Tuesday when two ships narrowly avoided a collision at a narrow turn in the channel between Naval Air Station North Island and Naval Base Point Loma.

The San Diego-based dock landing ship Harper’s Ferry made a tight turn to port, or left, on its way out of the bay just as the Everett, Wash.-based guided-missile destroyer Momsen was beginning its starboard, or right, turn into the harbor.

Harper’s Ferry was on the wrong side of the road, so to speak— the standards ships follow are known as the “rules of the road” — and the smaller and nimbler Momsen swerved left to avoid the larger ship.

The incident was captured by San Diego Webcam and published on its YouTube channel. The Navy declined to comment on the circumstances of the incident citing an ongoing investigation.

“You have two things going on,” Mercogliano said. “First, Harper’s Ferry (makes) a very tight turn ... getting on the wrong side of the road.”

The second, and less obvious error, was the tugboat assisting Momsen appeared to leave the ship late, preventing it from changing course as the Harper’s Ferry made its tight turn, he said.

He pointed to other variables that could have affected the ships. The crew of the Momsen, being based in Washington, might not be familiar with San Diego. And the Harper’s Ferry may have been wary of turning too wide due to an incoming ocean current that could have pushed the ship out of the channel to the right.

Mercogliano, who served as a civilian in the Military Sealift Command and is an adjunct professor at the Merchant Marine Academy, also runs the “What is Going on With Shipping“ YouTube channel, something he started after appearing on several news programs as an expert when a shipping vessel became stuck in the Suez canal last year. Mercogliano explained several details in a video Thursday.

He said Navy captains are under a lot of scrutiny in the wake of fatal Navy Pacific Ocean ship collisions in 2017. He hopes the captains aren’t punished but that the Navy learns from this, he said. Despite mistakes, the ships avoided one another successfully.

“It could have been a bad situation,” Mercogliano said. “The overarching rule is to make sure a collision didn’t happen. I think we need to remember there was no collision.”