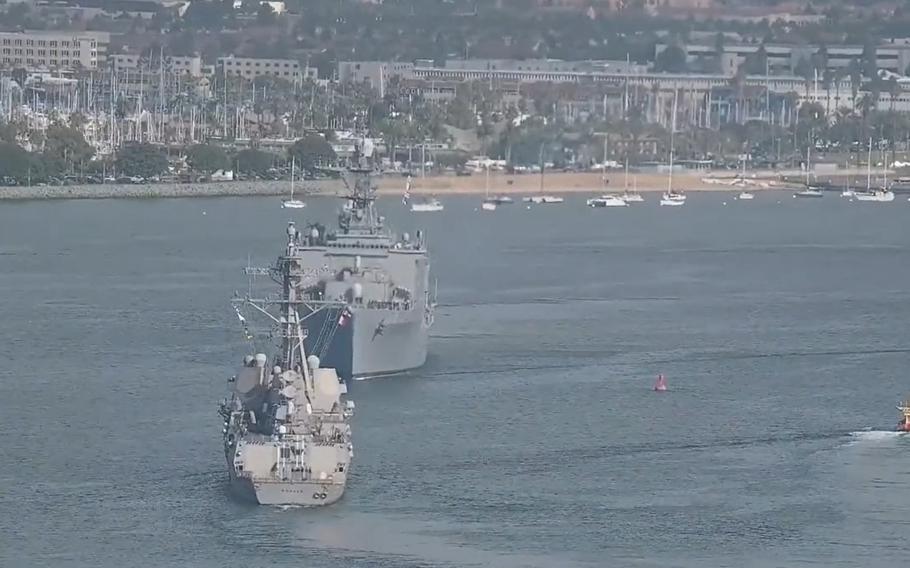 The USS Momsen, a guided-missile destroyer, and USS Harpers Ferry, a dock-landing ship, were moving in opposite directions in San Diego Bay on Tuesday, Nov. 29, 2022, when they came close to colliding, service officials said.  (Screengrab from Twitter)

WASHINGTON — The Navy has initiated an investigation of a near collision between two ships that occurred in the waters off San Diego, service officials said Wednesday.

The USS Momsen and USS Harpers Ferry were moving in opposite directions in San Diego Bay on Tuesday when they came close to colliding, officials said. The vessels were able to maneuver past each other safely and neither ship was damaged, a Navy spokesperson said. No related injuries were reported.

“The incident is under investigation,” a spokesperson for the 3rd Fleet said.

A webcam in the bay captured the near miss and the video was posted online.

The USS Momsen is an Arleigh Burke-class, guided-missile destroyer based in San Diego that entered service in 2003, while the USS Harpers Ferry is a dock-landing ship based near Seattle that’s been in service with the Navy since the mid-1990s. Dock landing ships are used to transport landing crafts and amphibious vehicles.

The near miss was the second incident on Tuesday involving a San Diego-based Navy ship.

Also that day, a fire broke out and injured nine sailors aboard the USS Abraham Lincoln as the aircraft carrier performed routine operations off the Southern California coast. The Navy said none of those injuries were serious and the fire is under investigation.