Navy seizes $1M in drugs, rescues men who set boat on fire in Gulf of Oman 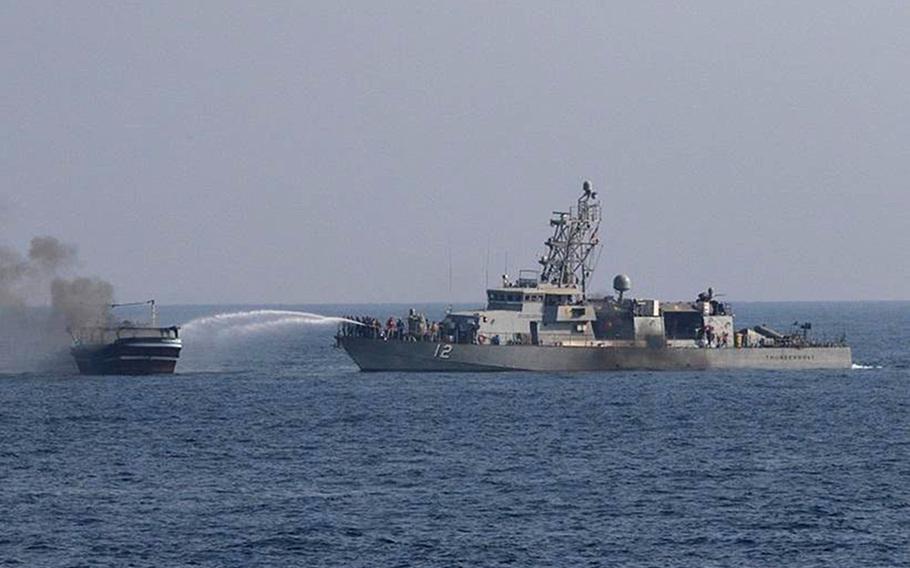 Sailors aboard patrol coastal ship USS Thunderbolt extinguish a fire aboard a fishing vessel in the Gulf of Oman on Oct. 29, 2022. The vessel, found to be smuggling drugs, was set on fire by the crew as U.S. forces approached, the Navy said. (U.S. Navy)

NAPLES, Italy — U.S. naval forces seized an estimated $1 million in drugs while rescuing eight Iranian and Pakistani nationals who set fire to their fishing vessel in the Gulf of Oman, the Navy said.

Patrol ships USS Chinook and USS Thunderbolt put out the fire on the vessel, which sustained significant damage and sank, the Navy said. But U.S. forces confiscated nearly 1,235 pounds of hashish, about one-third of the shipment.

The men set fire to the boat as Sirocco approached for a routine verification of its country of registration. They then jumped into the water as the blaze grew, said Cmdr. Tim Hawkins, a spokesman for the command and 5th Fleet.

They admitted to smuggling hashish and methamphetamines and were transferred to a “regional nation” for additional medical treatment and repatriation, according to the statement. Sailors assigned to patrol coastal ship USS Sirocco rescue mariners in the Gulf of Oman on Oct. 29, 2022. The mariners jumped into the water after setting their vessel on fire as U.S. forces approached, the Navy said. (U.S. Navy)

The Gulf of Oman event came three days after U.S. naval forces rescued three men from their burning motorboat in the Gulf of Aden.

In that case, the men were rescued by sailors from the destroyer USS Nitze and patrol boat USS Monsoon after their boat caught fire in international waters. The vessel sank about 50 miles off the coast of Yemen, Stars and Stripes reported Thursday.

Last year, Sirocco was conducting another countersmuggling operation when it rescued five mariners after a fire caused an explosion on their boat, also in the Gulf of Oman, Hawkins said.

Despite the similar circumstances, mariners setting fire to their boats during a flag verification “is not the norm,” Hawkins said. A civilian vessel burns in the Gulf of Oman on Oct. 29, 2022. The vessel was smuggling drugs and was set on fire by the crew as U.S. forces approached, the Navy said. (U.S. Navy)