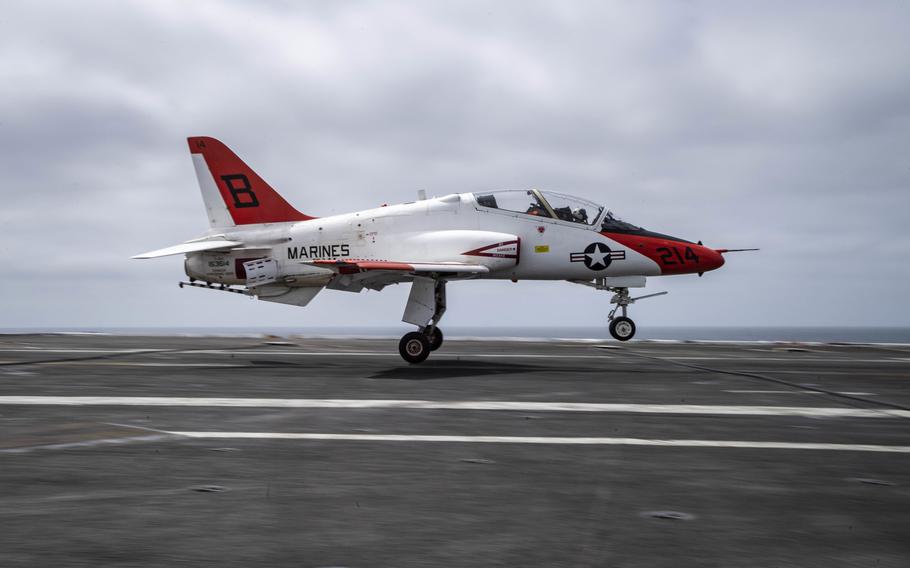 A T-45C Goshawk from Training Squadron 22 performs a touch-and-go on the flight deck of the aircraft carrier USS Nimitz, March 16, 2022, in the Pacific Ocean. (Hannah Kantner/U.S. Navy)

The Navy continues to investigate the root cause of an engine problem discovered in a T-45C Goshawk jet earlier this month that led to the grounding of the fleet of 193 trainer aircraft.

The Navy commenced a “safety pause” for the fleet three days after one of the jets experienced engine blade failure on Oct. 11, the service said in an Oct. 18 news release.

The Navy did not disclose where the jet was stationed.

“Out of an abundance of caution and concern for the safety of our aviators, [Chief of Naval Air Training] made the decision to halt all T-45C Goshawk operations following the discovery of an engine blade failure,” CNATRA Rear Adm. Richard Brophy said in the release. “We are working with our partners toward a swift resolution. Safety is at the core of our operations, and we must not expose our pilots or aircraft to unnecessary risk.”

Navy officials are working with Rolls Royce, the maker of the turbofan engine, to identify the root cause of the blade failure, the release said.

In an earlier incident on Aug. 16, a Goshawk crashed on approach to Naval Air Station Kingsville, Texas. The instructor pilot ejected safely.

The unnamed officials told Navy Times that no prior Goshawk mishap had been attributed to the engine blade failure now being analyzed, although the causes of the August crash remain under investigation.