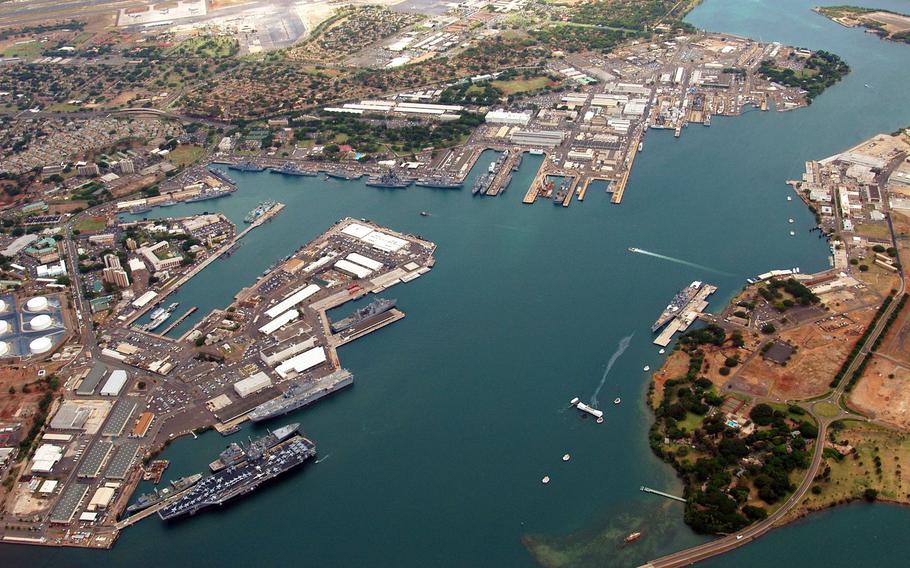 The Navy responded to three water main breaks on its Oahu system Friday, urging water conservation and issuing a boil-water advisory to the 93, 000 people served by the system (Joint Base Pearl Harbor-Hickam/Facebook)

HONOLULU (Tribune News Service) — The Navy says it does not yet have a timeline for when it will be able to fully repair a broken 36-inch water main, leaving the 93,000 people who depend on its water system to continue conservation measures and keep boiling their household water until further notice.

On Friday morning, the Navy responded to the main break at the Waiau Hawaiian Electric power station and two smaller leaks. Capt. Mark Sohaney, commander of Joint Base Pearl Harbor-Hickam, on Saturday said more information on the “complex site“ of the major break is required before a repair estimate can be provided.

“We got our assessment team on site but we don’t have an estimated timeline of repair,“ Sohaney said while speaking to reporters at the Navy Exchange parking lot, where personnel were distributing bottled water to residents. “It’s a complex site. It’s in a community, it’s right next to a stream, it’s right on a bike path, it’s next to the water. ... I want to do this at the speed of safety.”

He added later that new and old infrastructure in the water system at the area of the broken water main is adding to that challenge. That part of the system does not have a history of problems, he said.

The water main break has affected joint base facilities, housing, child development centers, schools, the Navy Exchange and some non-Department of Defense customers.

The Navy on Friday began distributing drinking water to residents of military family housing following the advisory telling them to boil their water before consuming it because of possible contamination. Residents are able to get 1 gallon of water per person, per day.

On Saturday, 23,500 gallons of water were handed out between the two distribution sites at Hickam Main Exchange and Navy Exchange. Sohaney said water also is being delivered to Iroquois Point, where more than 1, 450 homes on the Navy’s water system are located.

Water distribution is continuing from 8 a.m. to 6 p.m. daily until further notice.

Sohaney said there hasn’t been any indication the water coming out of household faucets is contaminated as a result of the main break and that no water outages had been reported.

“All residents have water. Some have a little lower water pressure than others, but so far there are no known outages,“ he said. “If you have a water outage or a decrease in water that’s not sufficient, that’s what I want to know.”

On the JBPHH Facebook page, some residents complained about having little or no water, although Navy officials said most of those problems occurred soon after Friday’s main breaks.

The disruption in water service also put a halt on the unpacking, or removal, of fuel from underground Red Hill fuel storage facility pipelines.

The Navy is removing the fuel as it moves to permanently shut down the facility. In November, fuel from the pipelines made its way into the Navy’s water system, leading to contamination that sickened hundreds of residents.

“The three water main breaks currently identified by Joint Base Pearl Harbor-­Hickam impacted water pressure to many sites, including systems being used to prepare for unpacking operations at the Red Hill Bulk Fuel Storage Facility,“ the Navy said in a news release Friday. “Joint Task Force-Red Hill will adjust the start date of unpacking to early next week as a prudent step focusing on safety.”

The Navy hasn’t yet made a recommendation for child development centers and public schools that were closed Friday following the water main breaks and scheduled to resume Monday. Sohaney said his staff is surveying water users to better understand the effects of the main breaks before providing input.

The two smaller main breaks took place in the Salt Lake and West Loch areas. The second leak is believed to have been caused by a car crash near a Navy Exchange in Pearl City about 30 minutes after the main break in Waiau. The third leak was an expected result of containing the other main breaks and fluctuating water pressure.