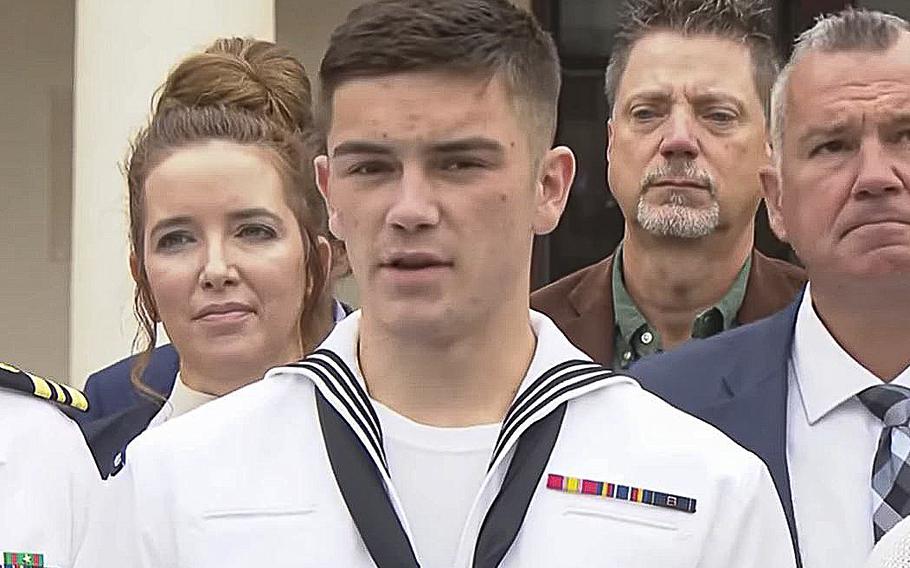 A video screen grab shows Seaman Recruit Ryan Sawyer Mays speaking outside a military courthouse in San Diego on Friday, Sept. 30, 2022, after he was found not guilty of setting a fire that destroyed the $1.2 billion USS Bonhomme Richard. (YouTube)

SAN DIEGO (Tribune News Service) — A 21-year-old sailor was acquitted at a military court-martial Friday on charges accusing him of setting the devastating 2020 fire on the amphibious assault ship Bonhomme Richard.

Seaman Recruit Ryan Sawyer Mays was charged with aggravated arson and the willful hazarding of a vessel in July 2021, more than a year after the blaze on board the $1.2 billion ship, which was moored at Naval Base San Diego at the time. The fire caused so much damage the Navy chose to sell the vessel for scrap.

Testimony and argument in the two-week trial — located in a military courtroom just 1,000 feet from the pier where the Bonhomme Richard had been moored when it burned — wrapped up Thursday morning. Capt. Derek Butler, the military judge overseeing the trial, began deliberating just before 11 a.m. Pacific time Thursday and returned with his verdict at 9:22 a.m. Friday.

Mays broke down sobbing when the judge read the not guilty verdict in court. He then entered the gallery, went to his mother and held her in a long embrace.

"I am looking forward to starting over," he said.

Other than a single eyewitness, the Navy's case against Mays was circumstantial, as Capt. Jason Jones, the lead prosecutor, acknowledged in closing arguments a day earlier. However, the defense team had other witnesses whose testimony contradicted the Navy's version of events — including their own eyewitness who said she saw a sailor with no resemblance to Mays near the scene where the fire began that morning.

"This is, in fact, an innocent sailor, and we could not be happier for him," Torres said.

The Navy's prosecutors did not comment on the verdict.

"The Navy is committed to upholding the principles of due process and a fair trial," said Lt. Samuel Boyle, a 3rd Fleet spokesperson.

Mays, who was 19 at the time of the fire, faced life in prison if convicted.

It was unclear Friday what's next for Mays — he is still on active duty but tested positive for drugs last year. He was reduced in rank to seaman apprentice, or E-1, in January. The Navy has a zero-tolerance policy for drugs, and Gary Barthel, Mays' former civilian attorney, said it's possible he might still be separated from the Navy.

In further comments to reporters Friday, Barthel said it's time for the Navy to take responsibility for the blaze.

"I believe that throughout this entire mess, the Navy was attempting to clean up their mess by accusing Seaman Mays with these allegations," he said.

More than 20 Navy officers — including the ship's captain, executive officer and the former commander of Naval Base San Diego — were administratively punished in the wake of the blaze. The former commander of the San Diego-based Naval Surface Forces, retired Vice Adm. Richard Brown, was censured by the secretary of the Navy in July. 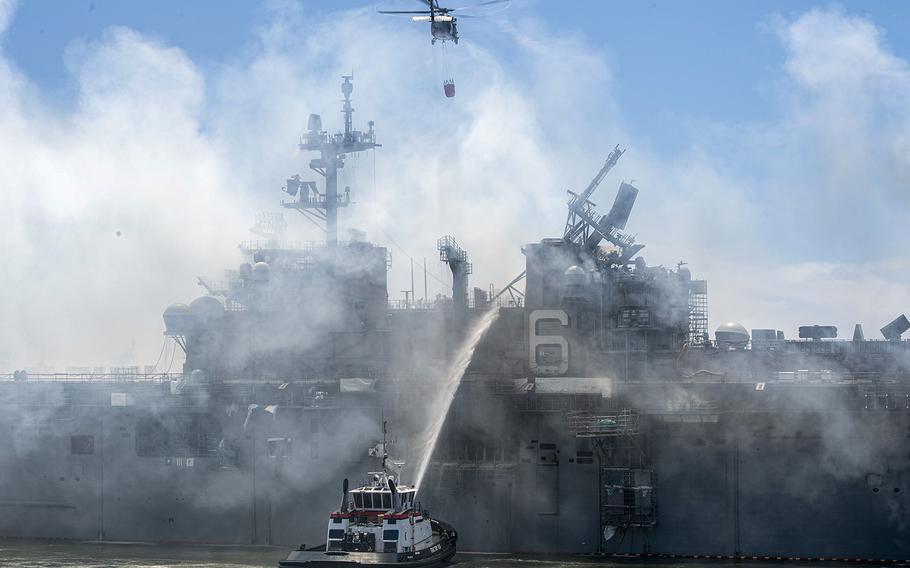 The fire erupted on the 844-foot warship the morning of July 12, 2020, while "the Navy slept," Jones, the prosecutor, said during closing arguments Thursday. It took two hours before firefighters were able to get water on the flames and, by the time they did, it was too late to save the ship, a Navy investigation found. The blaze was declared extinguished after burning more than four days. Soon after, the ship was declared a total loss.

It was decommissioned and scrapped last year.

The fire began in the ship's lower vehicle storage area, or "lower V," just after 8 a.m., investigators said. Amphibious assault ships are designed as mini-aircraft carriers, with a flight deck for helicopter and MV-22B Osprey operations. When deployed, the Bonhomme Richard would also carry Marines, who would launch and recover amphibious vehicles from the well deck of the ship.

The Bonhomme Richard had not been to sea in about two years at the time of the fire. The ship was nearing the end of a two-year, $250 million maintenance period in which it was retrofitted to be able to deploy with Marine F-35B Lightning II fighters.

Mays fell under suspicion soon after the blaze when a sailor told Naval Criminal Investigative Service investigators he saw somebody matching Mays' description walk down into the lower V about 20 minutes before first seeing smoke. The sailor, a deck seaman named Kenji Velasco, was on watch in the upper vehicle storage area between the ramp leading up to the ship's hangar bay and the one leading into the lower V, according to testimony.

Mays graduated Navy boot camp in July 2019, according to his Navy bio. He graduated from a Navy SEAL prerequisite school in Illinois before reporting to the Basic Underwater Demolition/SEAL school in Coronado that September.

However, according the Navy prosecutors, Mays quit BUD/S on his fifth day of training.

Sailors who fail to complete BUD/S are sent to the fleet as "undesignated" sailors, meaning they do not receive specialized job training or secondary schools before reporting to their duty stations.

Mays reported to the Bonhomme Richard in March 2020, his Navy bio says. He was assigned to the ship's Deck Department as a deck seaman — a job that mostly involves cleaning and painting the ship.

Mays did not like his new life as a fleet Navy sailor, according to testimony. His unhappiness with his new role in the Navy is what gave Mays motive to start the fire, Jones said Thursday.

"Deck Department on a big-deck amphib is about as far from the SEALS as you can be," Jones said during his closing argument. Jones said Mays felt the Navy's blue-water mission was "beneath him."

In the days before the fire, Bonhomme Richard sailors were told they'd have to move back on board the ship from their temporary living quarters on a nearby barge, according to testimony. Upon hearing this, Mays texted his division officer that the ship was "hazardous as (expletive)" because a spark from a ship contractor had recently struck Mays while in his rack in the Deck berthing, the former division officer testified. 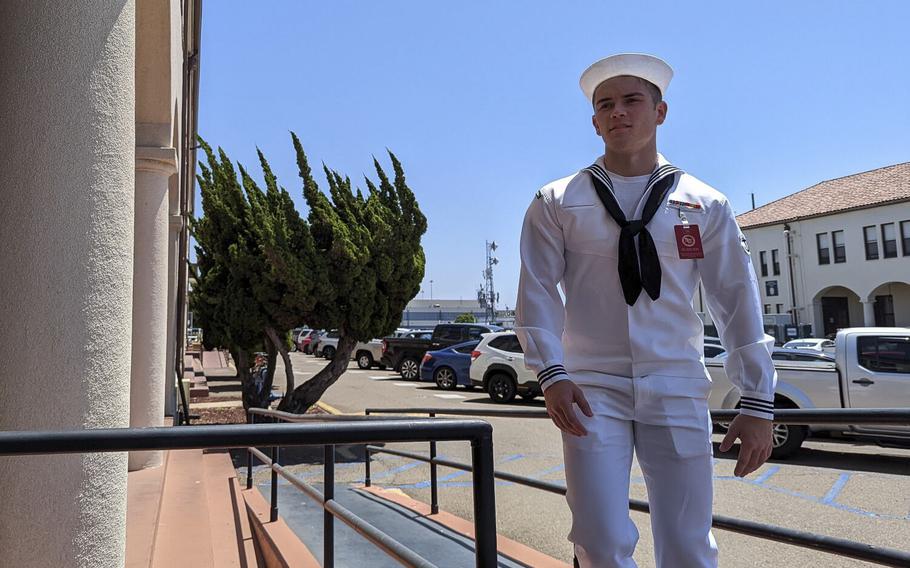 Mays' defense team, led by Torres, highlighted during the course of the trial what it said were examples of "confirmation bias" among investigators. From U.S. Bureau of Alcohol, Tobacco, Firearms and Explosives investigators to NCIS special agents, Mays' lawyers argued officials made a premature arson determination and became fixated on Mays without considering alternatives.

Defense fire investigators testified that fire-damaged lithium-ion batteries found in the fire's area of origin could not be eliminated as a potential cause of the fire, nor could a LiftKing Forklift that could have shorted and sent sparks into nearby flammable material.

The prosecution's burden went beyond proving the fire was intentionally set — they also had to prove it was Mays who set it. Velasco, who is now a petty officer 2nd class, was the only prosecution witness to testify to seeing Mays near where the fire began.

Velasco testified that on the day of the fire, he saw a person he believed to be Mays walk by him wearing a hat, mask and blue coveralls. He went down the lower V ramp carrying a metal bucket with both hands. "I love Deck," the person said to him as he passed, according to Velasco's testimony.

Defense attorneys pointed out that Velasco initially told NCIS he did not recognize the person he saw but over a series of interviews became more certain it was Mays.

Mays was on duty that day, but another sailor from his duty section testified that Mays went with him to the Deck berthing to retrieve cleaning supplies before the two split up.

Duty section muster was on the flight deck that morning at 7:45 a.m. It normally took up to 10 minutes to complete muster and assign tasks, according to testimony.

Prosecutors allege the fire was set just after 8 a.m.

Another eyewitness testified she saw a different sailor running from the lower V just before the fire. The sailor she described was dark-skinned, taller and had a larger build than Mays, who is white.

Special Agent Maya Kamat, the lead NCIS investigator, said in court she looked into the second suspect, who at one point became the focus of the criminal investigation. Mays — who was taken into custody Aug. 20, 2020 — was released from the brig less than two months later as the investigation shifted focus.

The second suspect had Google searches for fire heat scales on his phone and a "burner phone" app, Torres said during his closing argument. Data was also missing from the device around the time of the fire, Torres said.

NCIS stopped investigating the sailor when he was discharged from the Navy in the spring of this year, Kamat said — in part because once he left the service, he was no longer subject to military law and military law enforcement.

Jones acknowledged in his closing arguments much of the evidence against Mays was circumstantial, but said that is normal in arson cases in which most direct evidence is destroyed by fire.

"Sunday morning, while the Navy slept, Mays decided to prove the Bonhomme Richard was hazardous as (expletive)," Jones told the judge.

Torres kept the focus on bias in his closing.

"This trial is a live-fire exercise in confirmation bias," Torres said. "The evidence is not there."