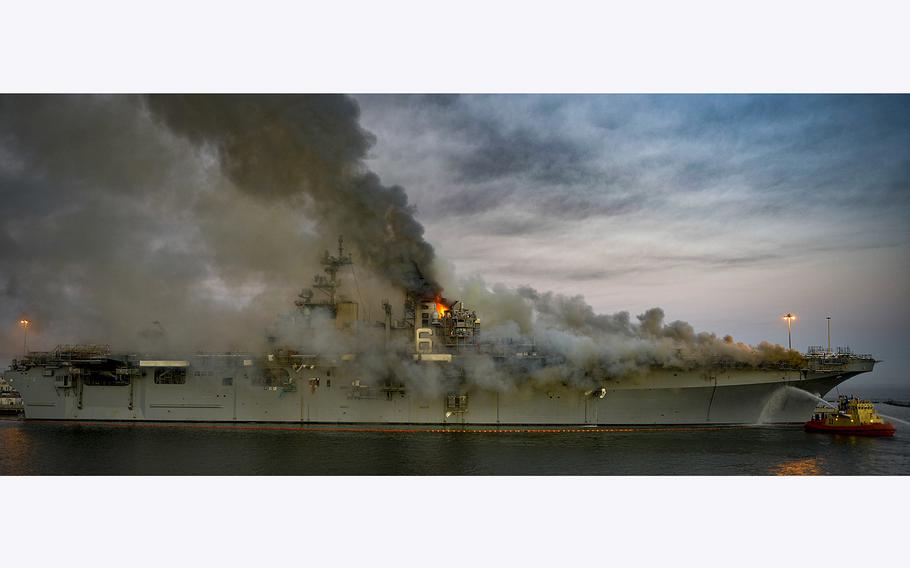 (Tribune News Service) — In the days that followed the devastating blaze that destroyed the amphibious assault ship Bonhomme Richard, agents began investigating a suspect who was seen running from the scene just before sailors saw smoke, an agent testified Tuesday.

The investigation found that the suspect, a sailor, had searched Google for the terms "heat scale" and "fire color heat scale" less than an hour before the blaze began, according to testimony. Investigators also found graffiti inside a nearby portable toilet that read "I did it" and "I set the ship on fire" — messages that a handwriting expert testified were likely written by that same sailor.

However, that sailor was not Ryan Sawyer Mays, the 21-year-old on trial charged with aggravated arson and the willful hazarding of a vessel.

On Tuesday, the Naval Criminal Investigative Service agent who headed the investigation into the fire testified that she stopped pursuing the other suspect in the spring of 2021 when he was administratively discharged from the Navy. The investigation then turned full bore on Mays, who denies starting the blaze. He faces life in prison if convicted.

The testimony came during the second day of the defense's presentation of the case and offered an alternative narrative to the one brought last week by the prosecution.

Miya Polion, a former petty officer 3rd class on the Bonhomme Richard, testified Tuesday she saw a tall, dark-skinned sailor in blue coveralls running from the lower V ramp, across the upper vehicle storage area and up the ramp to the ship's hangar bay just after 8 a.m. Mays is White.

"I never stopped looking at him because it was kind of weird to be running on the ship," Polion said during testimony Tuesday. She reported this to NCIS when investigators began searching for witnesses, she said.

Polion was new to the ship and did not recognize the sailor, who was also wearing a mask, she said. She identified the sailor later when NCIS arranged for her to see several Engineering Department sailors come in for a sort of lineup, she said. Agents also walked the ship with Polion as she showed them her location relative to the sailor, video of the walk-through played at trial showed.

The Union-Tribune is not naming the sailor Polion said she saw because he has not been charged with a crime.

Mays, who was arrested Aug. 20, 2020, and placed in confinement, was released from the brig in October 2020 as NCIS pivoted to this second suspect, according to Gary Barthel, who was Mays' civilian attorney at the time.

NCIS Special Agent Maya Kamat investigated the other sailor until he left he Navy in the spring of 2021, she said, which is when investigators re-focused on Mays.

During questioning, Kamat said the sailor explained the Google searches found on his phone were related to a novel he was writing with a second man about a dragon living on a ship. Kamat said she saw the manuscript for the novel and a conversation about the story on the messaging app Discord with the sailor's writing partner.

She also said the sailor declined to put investigators in touch with his writing partner and they did not pursue the issue further.

Kamat testified that she stopped investigating the other suspect "because he was separating from the Navy" and was no longer subject to military law. On cross-examination by prosecutors, she agreed that the evidence against the second sailor wasn't strong because Polion was "too far away" — at a distance of 115 feet — to identify him.

The defense is expected to rest its case on Wednesday.