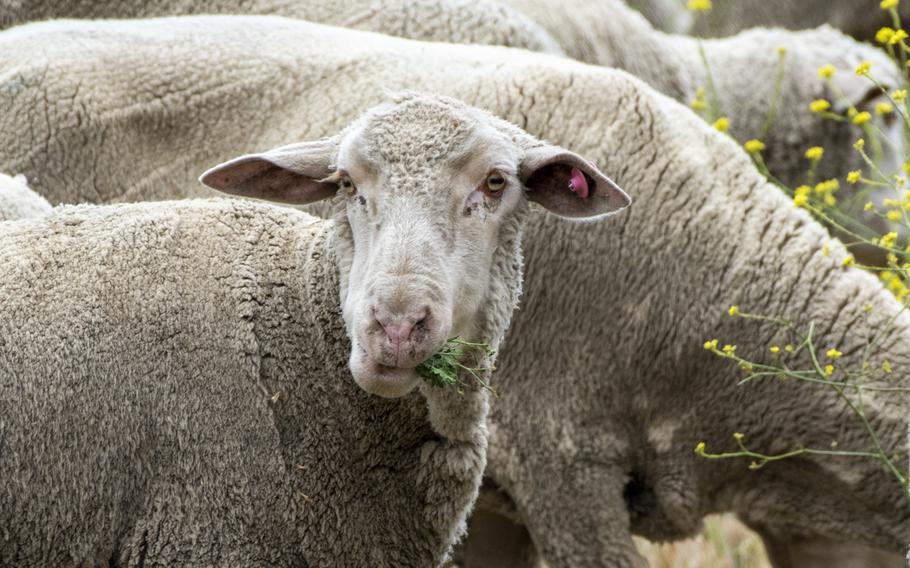 Sheep at Travis Air Force Base, California, May 6, 2022. People for the Ethical Treatment of Animals is calling on Defense Secretary Lloyd Austin to force the Navy to stop conducting painful and often lethal decompression sickness tests on sheep.  (Heide Couch/U.S. Air Force)

People for the Ethical Treatment of Animals will send a letter this week urging Austin to end the Navy’s conduct and financial support of “horrific” decompression sickness and oxygen toxicity tests on animals, according to PETA’s vice president of international laboratory methods, Shalin Gala.

The tests aim to develop ways to combat the sickness, commonly known as “the bends.” It occurs when nitrogen gas bubbles form in the blood, muscles and organs, including the brain, as bodies decompress from highly pressurized environments, such as underwater.

“Sheep were locked in high-pressure chambers and exposed to significant atmospheric pressure equivalent to what a diver would experience at 257 feet below sea level — and left in that state for 31 minutes,” PETA said of the tests. “The animals were then forced to decompress, which caused them to endure severe [decompress illness.]”

As part of the process, the sheep endured “crippling joint pains, bloating treated by stomach puncture and cardiovascular collapse or spinal cord injury, causing distress or paralysis and frequently resulting in death,” according to the letter, which cited the 2021 report.

The Navy previously funded similar testing at the University of Wisconsin-Madison but stopped in 2010 after PETA and local animal-rights group Alliance for Animals petitioned for the practice to end, arguing it violated state law.

“However, after UW–Madison subsequently persuaded the state legislature to exempt experimenters from state cruelty-to-animals statutes … it appears that the Navy has resumed conducting and funding such experiments on animals,” PETA said in its letter.

Gala said the tests, which have been abandoned by the British and French navies, are less accurate than other test models that do not involve animals, such as using modern technology to study decompress sickness based on human tissue and data from divers.

“The Naval Medical Research Center has actually publicly admitted that these experiments do not accurately translate to humans,” he said. “There’s a whole slew of non-animal methods that are much more human-relevant and can actually advance human medicine rather than relying on non-human animals.”