Sailors participate in a simulated breach of base security on Aug. 16, 2022, as part of the annual Citadel Pacific exercise. (Daniel Betancourt/Stars and Stripes)

YOKOSUKA NAVAL BASE, Japan – The Navy over five days took on armed assailants, suspicious packages, an emergency evacuation and six other simulated scenarios during the Citadel Pacific exercise at the home of the 7th Fleet.

The drills from Aug. 15 through Friday were part of security drills held at naval facilities across Japan. Other scenarios mimicked a small boat attack on the base harbor and an active shooter scenario.

“Our Navy’s responsibility is to ensure the safety and security of our personnel, equipment and installations,” Rear Adm. Carl Lahti, commander of Navy Region Japan, told Stars and Stripes by email Friday. “This annual exercise uses realistic scenarios to ensure our security forces all across Japan maintain a high level of readiness.”

At Yokosuka Naval Base, the exercise included approximately 300 sailors and civilians from every department, base spokesman Randall Baucom told Stars and Stripes on Friday. 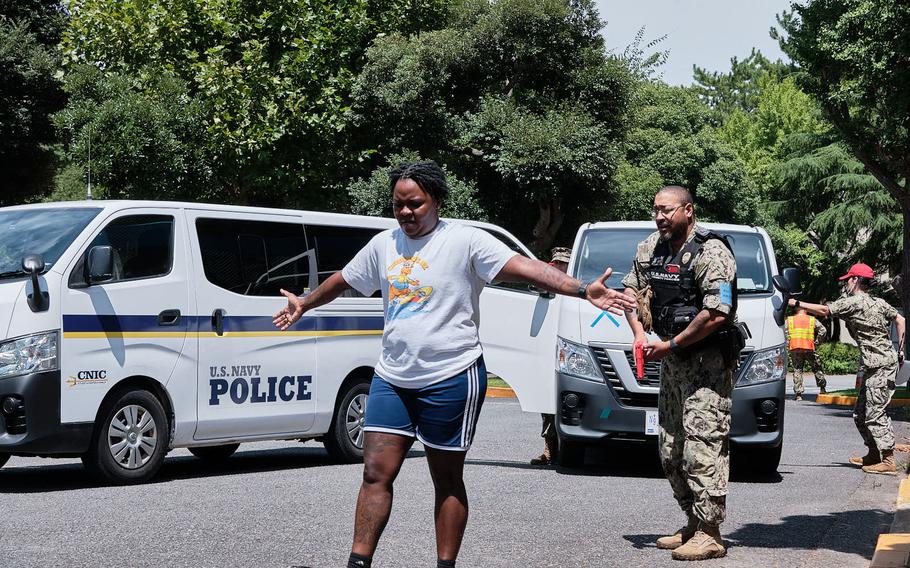 Sailors participate in a simulated breach of base security on Aug. 16, 2022,as part of the annual Citadel Pacific exercise. (Daniel Betancourt/Stars and Stripes)

“The amount of professionalism and dedication it took from all these players - from the department heads down to the sailors in the thick of it - was outstanding,” said base commander Capt. Les Sobol in a Friday email to Stars and Stripes. “They knocked it out of the park.”

In most scenarios, the drills are highly scripted, but only the “red hats,” or administrators, are aware of the script beforehand. The participants, or “blue players,” go into the exercises relatively blind.

“The idea is that we run these drills so we can kind of tweak the tactics,” said Hernandez, 43, of Brownsville, Texas. “So, when it happens for real, we have something to kind of fall back on.”

New this year for Yokosuka was a tabletop exercise simulating the evacuation of approximately 24,000 people. The naval base regularly drills for evacuations, but including the plan this year was a new addition to Citadel Pacific, Baucom said.

“All overseas installations have the responsibility to provide for the evacuation of non-essential personnel,” he said in a Friday email. “Evacuations can occur because of contingency operations or a natural disaster - like the evacuation of Clark Air Base when Mount Pinatubo erupted - or other environmental threats like the Fukushima Power Plant’s radiological threat in 2011.” 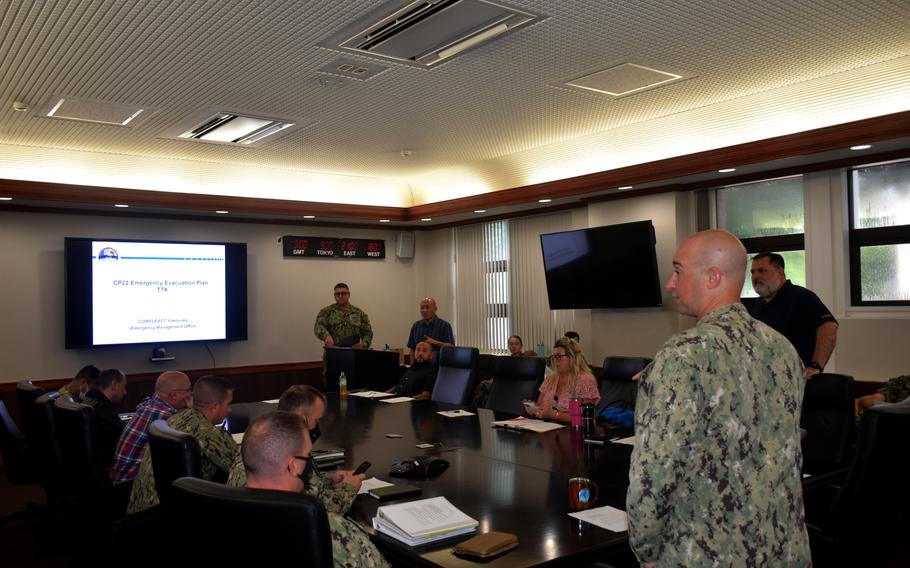 During the exercise, base leaders considered transportation, safety and other factors while planning to evacuate a full flight, or approximately 300 people.

“The ultimate problem will be moving everybody, that will be a much larger problem,” Sobol said during the exercise. “Whatever solution we have for the 300 people, it needs to be able to scale.”

“The real value in performing these drills was in the lessons learned,” he said.