Nasty weather blew a jet off the USS Truman. How’s that possible? 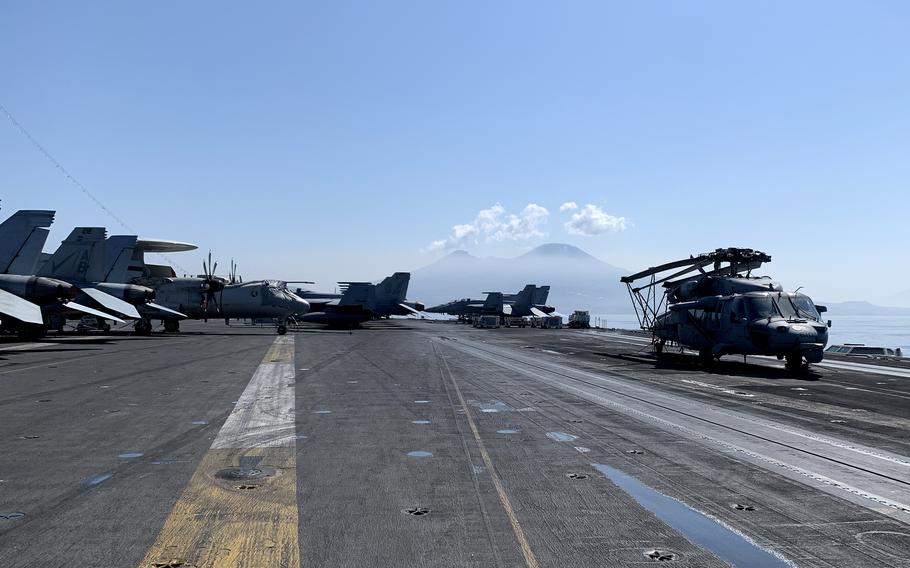 Aircraft are parked on the flight deck of the USS Harry S. Truman with Mount Vesuvius in the background on May 11, 2022. (Alison Bath/Stars and Stripes)

On Friday, “heavy weather” swept a state-of-the-art fighter jet off the deck of the aircraft carrier USS Harry S. Truman into the Mediterranean Sea, the Navy reported Sunday in a news release. No one was aboard the F/A-18 Super Hornet jet, which can fly faster than the speed of sound, or up to 1,190 mph.

The incident raises questions about what kind of weather could have possibly dislodged a jet that weighs more than 32,000 pounds.

A sailor was also injured at the time “while conducting operations,” the Navy wrote. The turbulent weather occurred when the Truman was conducting a “replenishment-at-sea” or resupply mission, the Navy said, which “was safely terminated.”

A Navy spokesperson did not immediately respond to questions about the conditions that might have led to the fighter being swept overboard. But although the Navy described the heavy weather as “unexpected,” an analysis of available computer model forecasts from the middle of last week reveals that there were many signs of storminess ahead of the incident.

The Navy did not release the exact location of the incident, but two days before, the Department of Defense tweeted that a Super Hornet had broken the sound barrier over the Ionian Sea, which is adjacent to Italy’s southeast coast.

Before the incident, a brutal, prolonged heat wave gripped Italy, breaking many records. Rome and Florence saw their hottest June days on record. The heat was also tied to an ice avalanche in the Italian Alps that killed 11 hikers on July 3.

But Thursday marked the end of heat wave as a strong cold front swept across the country and the Ionian Sea from the north. Computer models simulated ocean waves building to 8 feet.

These models also showed an intense zone of low pressure and cold air at high altitudes passing over the sea, contrasting sharply with abnormally warm sea surface temperatures. The sea surface temperatures were up to 7.2 degrees (4 Celsius) warmer than normal — meeting the criteria for an ocean heat wave, according to the Euro-Mediterranean Center on Climate Change.

The contrast between temperatures at the ocean surface and high in the air might have created an exceptionally unstable atmosphere conducive for thunderstorms.

Intense thunderstorms are known for unleashing downward blasts of violent winds or “microbursts” that slam into the ground and fan outward. Microburst winds can top 100 mph and generate damage comparable to tornadoes.

Microbursts infamously led to multiple aviation accidents in the 1980s and 1990s, but the development of early warning systems have all but halted such crashes since.

The Navy wrote that the “details and cause of the incident are under investigation,” but that the aircraft carrier and its air wing “remain fully mission capable.”

The Aviationist, a military aviation website, called the incident “at least bizarre.”

“[W]hile aircraft can go overboard during routing flight operations at sea, they shouldn’t be blown off the deck by weather,” the site said. “In fact, when rough seas or heavy weather is anticipated, aircraft and anything else that could potentially move, like tractors, carts, etc., are chained down when they are not used, so that they don’t fall from the flight deck.”

Although a 32,000-pound aircraft might seem heavy, the aircraft’s wings make it easier for winds to loft it if it is unsecured or not secured properly. For smaller planes, winds as light as 60 mph or so can launch them into the air.

“Most small airplanes are ready to fly at about 50 to 60 knots, speeds well exceeded by many severe storms,” said an article at FlyingMag. “And since an airplane’s wings don’t know the difference between wind created by the force of its engine or the winds from a storm, it will literally take off unless it’s somehow secured.”

The Truman was stationed in the Mediterranean in December when Russian troops congregated near the Ukraine border. It has remained there since the Russian invasion. The Super Hornet aircraft are part of the Strike Fighter Squadron, which is “defending U.S., allied and partner interests” aboard the carrier, the Department of Defense tweeted.

The U.S. Naval Institute reported that the Navy is still reviewing how to recover the overboard aircraft. Super Hornets cost about $50 million per aircraft to build. Boeing was awarded a $4 billion contract in 2019 to build 78 Super Hornets.