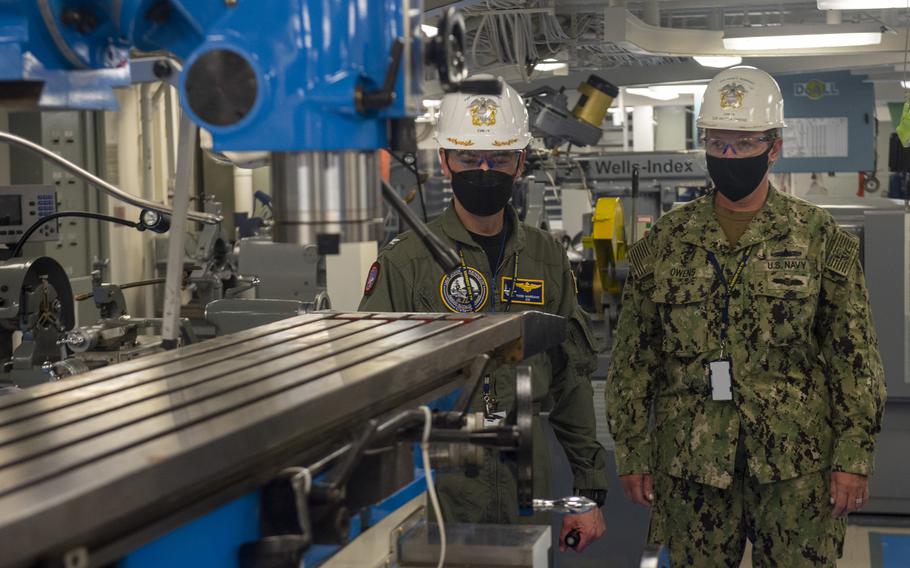 PCU John F. Kennedy Commanding Officer Capt. T. R. Marzano inspects the machine shop aboard USS John F. Kennedy (CVN 79) before the crew takes ownership of the space from Huntington Ingalls Shipbuilding. Newport News Shipbuilding has hit a milestone in its multibillion-dollar, multiyear project building the carrier John F. Kennedy, as it turns over the 1,000th compartment inside the ship to its crew. (Michael Croft/U.S. Navy)

(Tribune News Service) — Newport News Shipbuilding has hit a milestone in its multibillion-dollar, multiyear project building the carrier USS John F. Kennedy, as it turns over the 1,000th compartment inside the ship to its crew.

The shipyard has also installed more than 9.8 million feet, or more than 1,800 miles, of the approximately 10.5 million feet of cable on the carrier. The most recently completed spaces include electrical and engineering, the shipyard said.

It allows sailors assigned to the Kennedy to increase training on the ship while the carrier’s remaining 1,615 compartments are completed and final outfitting and testing progresses.

The crew is slated to move on board the Kennedy next year and the carrier is scheduled for delivery to the Navy in June 2024.

Construction started in 2011, and acquiring the carrier is expected to cost the Navy $12.7 billion, according to its fiscal 2023 budget.

Kennedy is the second ship in the USS Gerald R. Ford class, and the shipyard is already working on the next two in the class, the Enterprise and the Doris Miller.