A change of command ceremony with a twist — laughter, jokes and cheers 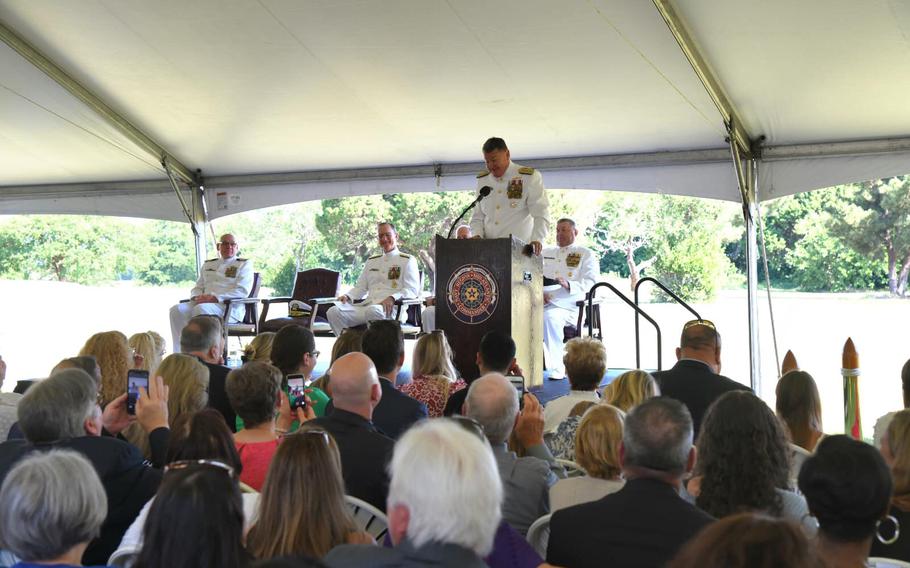 (Tribune News Service) — As soon as the whoops, whistles and applause erupted as Rear Adm. Charles “Chip” Rock stepped to the lectern, it was clear it wasn’t going to be a traditionally solemn change of command ceremony at Navy Region Mid-Atlantic.

With lots of laughter and joking memories of Navy friends from a 35 year career — like the pair of shoes one friend still owed him after a particularly enthusiastic night of partying years ago — Rock turned over command of a region with 14 Navy installations in 20 states, from Wisconsin east to Maine and south to North Carolina, to Rear Adm. Scott Gray.

Instead of the usual speech from a military boss or senior mentor, he asked daughter Ashley to be the keynote speaker — and she said he made her promise not to talk about him.

But she did, just to mention the most important thing:

“How amazing you can serve so many people while still being an incredible father,” she said.

She said she wasn’t going to recite the usual list of awards and medals and accomplishments — those weren’t what leadership was about, to her.

“Real leadership is the success of people around you,” she said. “My dad has spent the last 35 years making it better for other people.”

Rock, who forged stronger connections between the many Hampton Road Navy installations and local communities, put in a longer-than-usual four years at the region, through the peak of the pandemic.

“The Navy, America ... we got through this together,” he said. He said the region made progress on housing, though there is still much to be done, and said he was proud of helping boost the Navy’s exceptional families, mental health services and the regional staff’s workforce.

He mentioned the exceptional families program — the Navy’s effort to help family members with special needs — several times during his speech. That, like asking his daughter to give the keynote speech, reflected something important to him:

“It is all about the the family,” he said. “They are service members, too.”