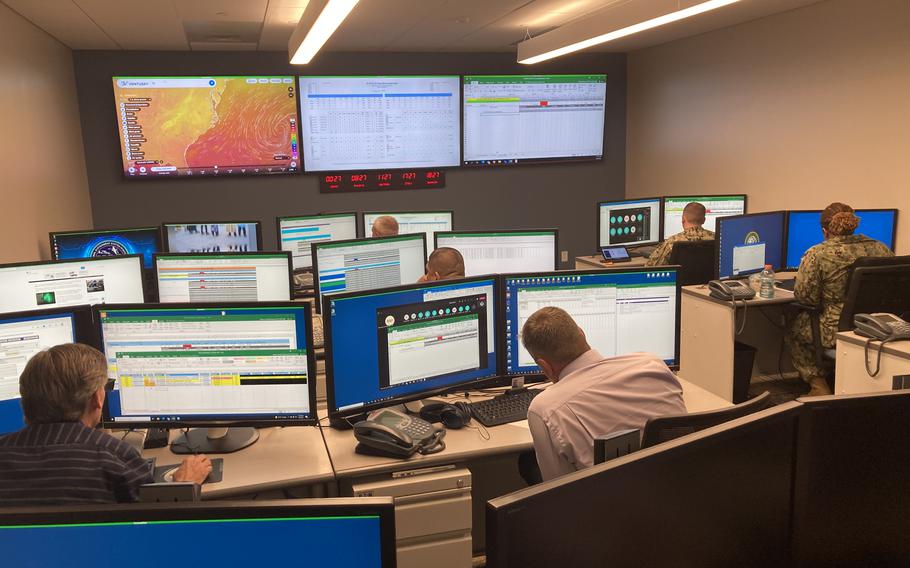 Staff members of the Navy's Maintenance Operations Center in Norfolk get their daily update on the status of all the Navy's E2 airborne reconnaissance planes. (Dave Ress, Daily Press/TNS)

(Tribune News Service) — At the Norfolk-pioneered Maintenance Operations Center around midday these days, one team gets daily rundowns on the status of a single F/A-18 SuperHornet on the East Coast at the same time other groups get similar updates on West Coast MH60S Seahawk helicopters and Navy and Marine Corps MV22 Ospreys.

The center’s new space in Naval Station Norfolk’s V-88 warehouse is a step forward from the center’s old spot on a corridor of Naval Air Force Atlantic headquarters.

There, space and IT connection limitations meant the team could do its daily status updates for only one aircraft type at a time — and at the time, it was only handling F/A-18s and helicopters.

But the center now handles Ospreys as well as E2s, the Navy’s advanced reconnaissance planes; C-2 Greyhounds, its carrier onboard delivery planes; and P-8 patrol planes; and is about to expand to handle C-130s cargo planes and other Marine Corps aircraft.

Its staff is using data analytics techniques to tackle a longstanding problem — that too many F/18s were out of service because a lack of parts was slowing maintenance and repair.

They’re looking to predict when planes and helicopters will need work before parts fail, and at how to improve training and processes to speed aircraft back into action, said Rear Adm. John Meier, commander of Naval Air Force Atlantic, which led the launch and development of the center.

“It’s preventive maintenance, like you want to do on your car,” he said.

Eventually, they aim to monitor the maintenance and repair needs of all Navy and Marine Corps aircraft in real time, he said.

Just over the past several months, they’ve shown how this works with the Navy’s new E2-Ds, he said.

The newest version of the E2 workhorse is intended to operate as a kind of airborne command center, far ahead of the carriers to extend the reach of their air wings and strike group ships. That means more high-powered electronics than older versions.

To handle that extra computing and sensing power, the new E2-Ds use fiber optic lines instead of copper, and the center’s data crunching indicated a need for maintainers to be trained on some of the cleaning and testing needed on those lines, Meier said.

When data also suggested the E2-Ds’ power amplifier modules were degrading faster than expected, the center’s analysts narrowed down the problem to what was happening when the modules were plugged into hangar electric systems, he said.

The center is modeled on the operations centers commercial airlines employ, except that airline executives use their centers to make sure their planes are generating the most profit possible, Meier said.

The Navy center’s aim is to boost readiness as efficiently as possible.

The same analytics and communications with everyone along a supply chain, from manufacturers to warehouses to shop floor leaders at Navy and Marine Corps aviation squadrons, make that a lot more possible, he said.

“It is about the Navy being a learning organization,” said Adm. Bill Lescher, vice chief of naval operations, after a ribbon cutting to formally open the already-operating new center facility.