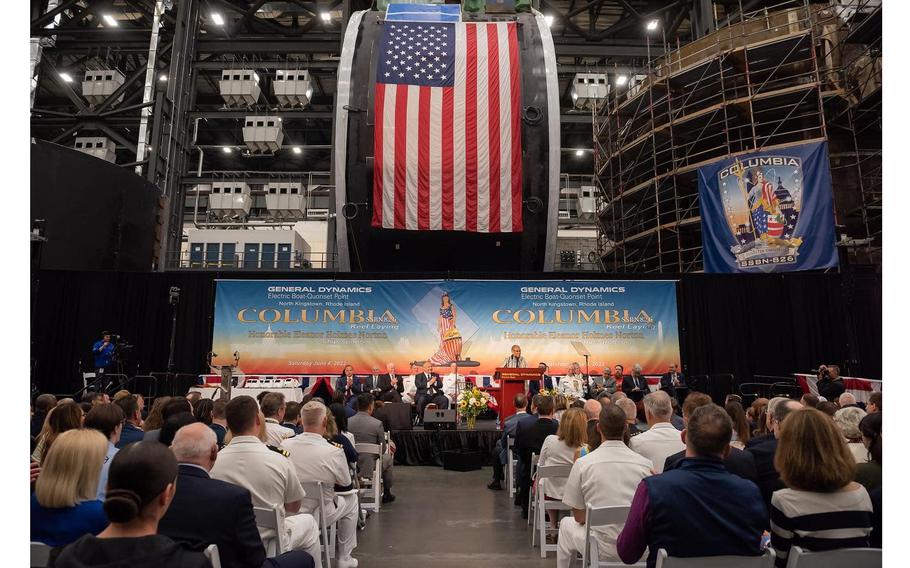 Electric Boat marks the laying of the keel of the submarine District of Columbia (SSBN 826) on June 4, 2022, in North Kingstown, R.I. (General Dynamics Electric Boat/Facebook)

NORTH KINGSTOWN, R.I. (Tribune News Service) — Electric Boat held a keel-laying ceremony Saturday morning to mark the beginning of construction for the submarine District of Columbia (SSBN 826), the first of its new namesake class of boats.

Political and military dignitaries converged on the Quonset Point facility in North Kingstown for the keel laying — the ceremonial start of construction for a submarine. U.S. Rep. Eleanor Holmes Norton, D- DC, sponsored the ship and inscribed her initials on it Saturday.

Secretary of the Navy Carlos Del Toro delivered the ceremony’s keynote address. He was one of several speakers who appreciated the work of EB employees.

“I know the hard work that goes into waking up, coming to work, in times of heat and times of cold, to make these ships,” he said. “Your role is as important as mine.”

The Navy secretary said Columbia-Class submarines “will be the cornerstone of our national security” and represent 70% of the U.S. nuclear arsenal.

“Adversaries know our silent service is always on patrol. They don’t know where,” Del Toro said. “It is imperative that we must now modernize our fleet ... recapitalizing our sea-based deterrents as foundational to our national security.” He thanked the American people for their “investment and confidence” in the ship-building effort.

He mistakenly and repeatedly referred to Delaware at the beginning of his remarks before self-correcting to Rhode Island, noting President Joe Biden was in Delaware recently.

The seriousness of the ceremony was balanced by a celebratory reception before and after the event that included donuts made to look like submarines. The standing room-only event, which was not open to the public, drew an estimated 1,500 people, according to General Dynamics Electric Boat.

Submarine Columbia (SSBN 826) is the lead ship in the newest class of ballistic submarines for the Navy, which will replace the Ohio class of Trident-missile nuclear submarines that are scheduled to retire from service at the end of the decade.

“The Columbia now is the largest single shipbuilding program in the Navy’s budget,” he said. “Its production facilities have transformed the skylines of Quonset Point, Groton and Newport News. The dramatic hiring in southern New England over the last decade has elevated Electric Boat to the position of the number one private employer in both Connecticut and Rhode Island, which will continue into the 2030s.”

According to EB, the Navy awarded the company a $9.5 billion contract for the first two Columbia class ships, which includes construction, testing and associated design work. The company also was awarded funds for additional work in 2021 and this year for $314 million and $474 million, respectively.

Since 2015, Courtney has been working to finance the construction of the Columbia class. In 2016, he “helped secure the inclusion of a provision in the year-end continuing resolution that provided a critical funding boost for the Columbia-Class submarine program.”

In 2017, the Navy contract for detailed design of the Columbia program was awarded to EB. In 2019, the company broke ground on a new production facility designed expressly for Columbia-class sub construction.

The facility is “part of a $1.8 billion investment General Dynamics is making to grow its submarine design and manufacturing infrastructure,” a Saturday news release reads. Construction of the Columbia is roughly more than 20% complete.

EB was awarded the Columbia-class construction contract in 2020. In February and March of 2022, two votes in Congress allowed for the continued funding for the first Columbia-class submarine.

The March vote “included a Courtney-authored provision providing $130 million to continue efforts to improve the nationwide supplier base, as well as $20 million to support training programs to help support expansion of the skilled submarine workforce to prepare shipyards for an increase in future submarine construction,” according to Courtney’s office.

“The Columbia-class submarine program will be constructed in large part by the men and women at the EB shipyard in Groton, and will support jobs up and down the eastern CT manufacturing supply chain,” Courtney’s office added.

“’Keel laying’ is an ancient maritime term whose historic definition is ‘the formal recognition of the start of a ship’s construction.’ ... This submarine’s construction hardly began today,” Courtney said. “In a sense, today’s keel laying does in fact mark a start — these modules are now poised to be fitted out for final assembly and seaworthiness.” He then paraphrased Winston Churchill, saying, “It’s not the beginning of the end, but it is perhaps the end of the beginning.”

The Navy approached Electric Boat in 2007 about assisting in designing the Ohio-class replacement class. The first Columbia-class boat is scheduled to be deployed in 2030, with a service life that is expected to last until the 2080s.

“The Columbia class of 12 ships will each carry 16 missiles, which in total will represent approximately 70 percent of the country’s nuclear arsenal,” according to a description at Saturday’s event from EB. “At a length of 560 feet and displacing 20,810 tons, the Columbia will be the largest submarine ever built by the U.S. Its reactor will not require refueling during its lifetime of planned service, making the ship more cost effective to operate and maximizing time in deployment. In addition, the submarine will feature superior acoustical performance and state-of-the-art sensors to make it the most capable and quiet submarine ever built.”

The Columbia ultimately will be assembled and tested at Electric Boat, and will be delivered to the Navy in 2027.

“With the Columbia-class program, the Navy has entrusted Electric Boat to deliver the next 60 years of nuclear deterrence for our nation, continuing the company’s legacy of delivering the finest, most technically advanced submarines in the world,” EB President Kevin Graney said Saturday.

“’Popular Science’ just called you masters of steel,” he said to the workers gathered throughout the facility. “From the nuclear power plant within to the deep ocean pressure without, you craft the most capable ... vessels to ever sail the seas.”

Holmes Norton, who took the opportunity during her remarks to express her support for D.C. statehood, had her initials welded onto a plate by Electric Boat welder Maria Betance-Pizzarro.

According to EB, “Since submarines have round hulls and do not have a keel, the ceremonial plate will be mounted in a place of honor on the ship permanently.”