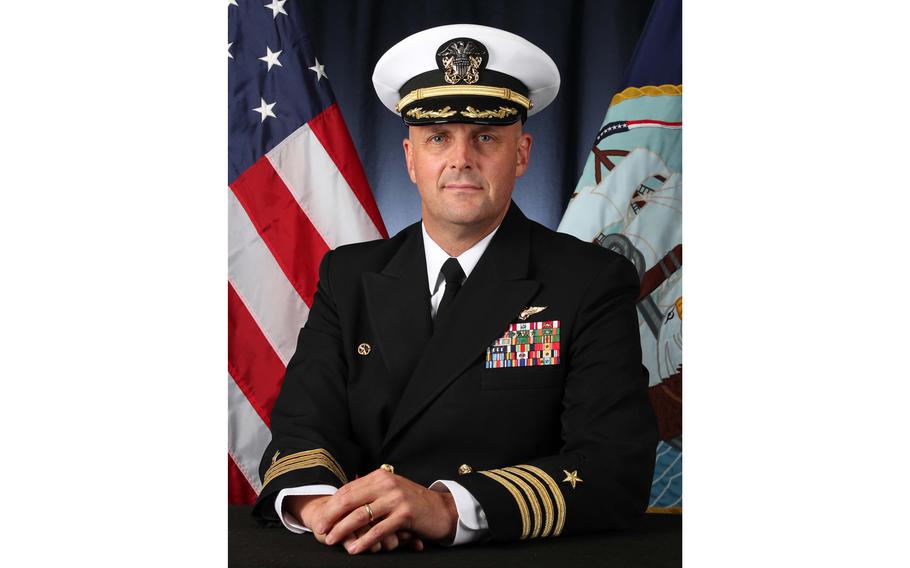 (Tribune News Service) — In a way, the heart of the movie “Top Gun: Maverick” began to be sketched out on a white board in a ready room of the USS Theodore Roosevelt by the officer who was about to take command of USS Gerald R. Ford.

Capt. J.J. “Yank” Cummings, then on the staff of Naval Air Force Pacific, had been asked to show the film’s director, Joe Kosinski, around a carrier as the film was beginning to take shape in that summer of 2017.

The two had bonded the night before — Cummings had Kosinski over for dinner at his home in Chula Vista, and afterwards the two sat down on Cummings’ sofa as the Navy flyer played videos dating from his days flying F-14 Tomcats.

“They weren’t that fancy HD stuff — handheld video, looking forward or to the side over the wing,” Cummings said.

“Joe is a good listener, he takes all kinds of notes and he said he got a lot of ideas for the flight sequences,” Cummings said. The next day after taking Kosinski to see the action on the flight deck, Cummings took the director to the ready room.

“Fighter pilots — we always hit the white board,” he said. “Joe talked about the screenplay, I wrote it down; erased things I said weren’t right. We went back and forth.”

That, and many more such conversations refined the script, since Kosinski tagged Cummings as a technical adviser in the early phases of the film’s development, before Cummings headed east for the Ford and Kosinski started shooting film.

“I wanted things absolutely realistic,” Cummings said. “Joe wanted drama; he said, ‘If we make it your way we’ll have the more boring fighter film ever, even if pilots think it’s great.”

The final mission as the two worked it out — “Joe wanted a kind of Star Wars spectacle, I’m not going to spoil it for anyone” — had Cummings worried his advice had got the balance between realism and drama wrong.

“But we showed it to a bunch of fighter pilots and they were jumping up and yelling ‘Yeah!’ ‘Awesome!’” Cummings said.

Cummings pushed to make sure there were no scenes of fraternization between male and female pilots or sailors, no locker room scenes and no punches thrown. He had to explain that one proposed scene of a pat on a pilot’s rear would be considered sexual harassment or assault.

“The writers would call and say: ‘Hey I want to do this, how would you react? What would your attitude be?” Cummings said.

“They asked, what would happen at the end of one situation and I said ‘we’d probably go down to the Gaslamp (a San Diego district full of bars) and have a good time,’” Cummings said. “They said that wouldn’t work, so I said, ‘maybe surfing?’”

He argued for — and won — stressing the character Lt. Natasha “Phoenix” Trace’s flying and combat expertise, since that’s what the Navy’s growing numbers of female fighter pilots are like.

All in all, the film captures what Cummings sees as the essence of fighter pilots’ work and life.

“It’s really a film about risk,” he said. “That’s what Naval aviation is all about: what are the risks of this, what are the costs and what do we gain. … We’re risk takers, but we’re not gamblers.”

He said the Navy is excited about the film and the way it raises the profile of the service and hopes it encourages more people to sign up.

“How can you see those scenes and not want to fly?” Cummings asked. “But it’s not completely realistic about the Navy; there’s nothing about nine-month deployments with 5,000 of your newest best friends.”

But the way pilots fly, interact with one another and talk is as realistic as can be, he said.

And he should know — two lines in the movie are tags of his that colleagues instantly recognized.

One is a blunt way of describing a slowpoke.

The other, a line Cruise delivers when he’s asked why he doesn’t know a common nautical term: