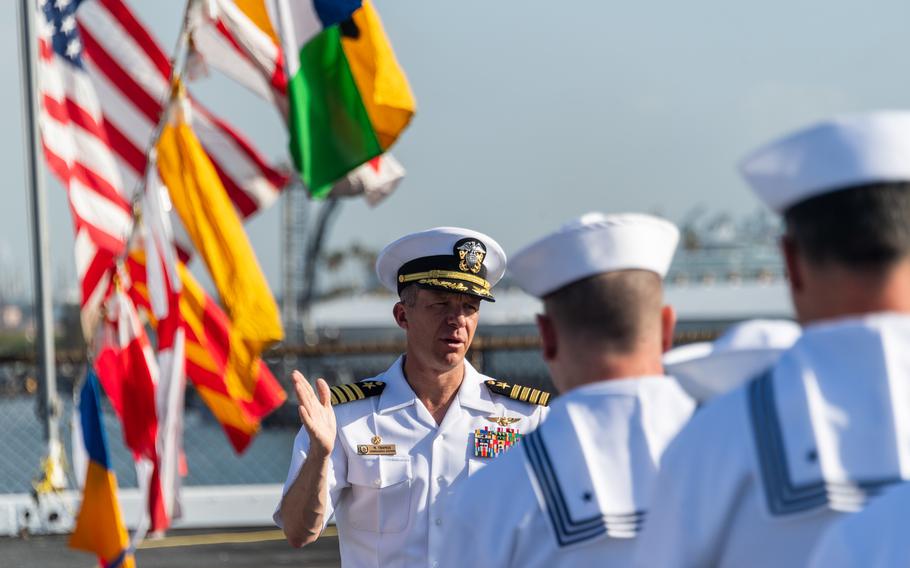 LOS ANGELES (Tribune News Service) — LA Fleet Week came to a close this Memorial Day, with the holiday drawing large crowds, but some organizations are hoping their outreach over the course of the long weekend will last.

The event — the first in-person Fleet Week since 2019 — featured four days of Armed Forces celebrations centered on sea services including the U.S. Navy, Coast Guard and Marine Corps. Today's events closed with a Memorial Day Service in honor of veterans across the country.

While Fleet Week offers attendees a glimpse behind the closed doors of the military's technical operations and equipment, it's also a forum for community outreach. This year, environmental education took center stage at Fleet Week — with attendees varying from the Navy's Stewards of the Sea to San Pedro's Cabrillo Marine Aquarium.

Stewards of the Sea, established in 2013, is sponsored by the U.S. Fleet Forces Command. Its goal, according to the program's website, is to educate "on the Navy's environmental policy and initiatives — and to increase support for its training and basing activities among public, scientific and regulatory communities."

Stewards of the Sea has several environment-focused programs — and with the help of biologists, geologists and historians, it helps conserve, restore, and sustain the areas most impacted by Department of Defense operations across the country.

Stewards of the Sea set up shop at Fleet Week just out front of the USS Iowa for the long weekend in hope of educating the community about the Navy's environmental protection efforts.

"Our interest in the environment has to do with the fact that we overdeveloped the southwest region," Haase said, "and that a lot of the (Department of Defense) land ended up being where a lot of endangered species live."

Haase cited San Clemente Island, which sits off the California coast and is used exclusively for Navy training operations, as an example of habitat restoration the Navy is undertaking — on land that they still actively use.

"We study them (native island wildlife), and we make sure that we're not training where they're having babies or during mating season," Haase said. "We have some awesome stories of species that live on the island that have been removed from the endangered species list."

Since the U.S. government began eyeing environmental protection regulations, Haase said, the Navy has learned to adapt to being stewards of earth-friendly operations.

"We put a lot of effort into it and we're very proud of it — otherwise we would lose the trust of the public and the land we work on," Haase said. "We have better standards and we do follow them, and there are a lot of people who are very passionate about doing their work right."

Also in attendance at Fleet Week was the California Department of Forestry and Fire Prevention, known as Cal Fire.

The State of California department has stewardship of 31 million acres of California's privately owned wildlands, according to its website. Aside from providing vital wildfire response, the department provides a range of emergency services for local municipalities in 36 counties across the state.

As California's wildfires continue to worsen in intensity, frequency and duration — fueled by rising temperatures and climate change — CAL FIRE has made efforts to shift some of its focus from wildfire response to wildfire prevention.

For Windy Bouldin, chief of the Office of Program Accountability at CAL FIRE, Fleet Week serves two vital functions — it's an opportunity to educate the public on fire prevention tips, and to get in touch with veterans looking for new careers after their service. Aside from her position as accountability chief, she's coordinator of RVETS — shorthand for Returning Veterans: Enlisting Their Skills, which aims to connect veterans with career resources.

"We have a lot of partnerships with the military and its different branches," Bouldin said, noting that many veterans attempt to transition into firefighting post-service. "What we say is, this is Cal Fire's grassroots effort to integrate and transition service members and their families into service with CAL FIRE."

The process can be daunting, Bouldin said, and RVETS' mission is to clarify the requirements and match veterans with jobs that fit their existing skill sets.

"It's quite a laborious process to get (a job) with the state," she said, "so we try to help navigate them through that, because most don't understand that the application you're submitting may just be for an exam and not an actual vacancy."

California has several employment benefits for veterans they may not be aware of.

"It can be overwhelming, and a lot of times veterans are underemployed," Bouldin said. "There's a need to match veterans with jobs at their skill level — or it's a waste of talent that weighs on morale."

Expanding the pool of applicants who can apply to positions with CAL FIRE, Bouldin said, helps the agency fulfill its mission of fire management, prevention and response statewide.

The Cabrillo Marine Aquarium, just a few blocks from the Fleet Week expo in San Pedro, also made an appearance this year.

Native to Southern California, grunion are known for their annual excursion ashore at night to lay eggs. They're the only fish to do so — and that, along with the iridescent glow produced by the moon's reflection on their scales — has drawn crowds in the hundreds to local beaches to watch the process.

"We want to educate the kids more about the aquarium," said Mckenna Quick, who works at Cabrillo Marine Aquarium. "We brought the grunion so they could hatch one of the fish native to our coasts — we're one of the only beaches that they come up on most frequently."

Even some locals, Quick said, have never heard of the grunion.