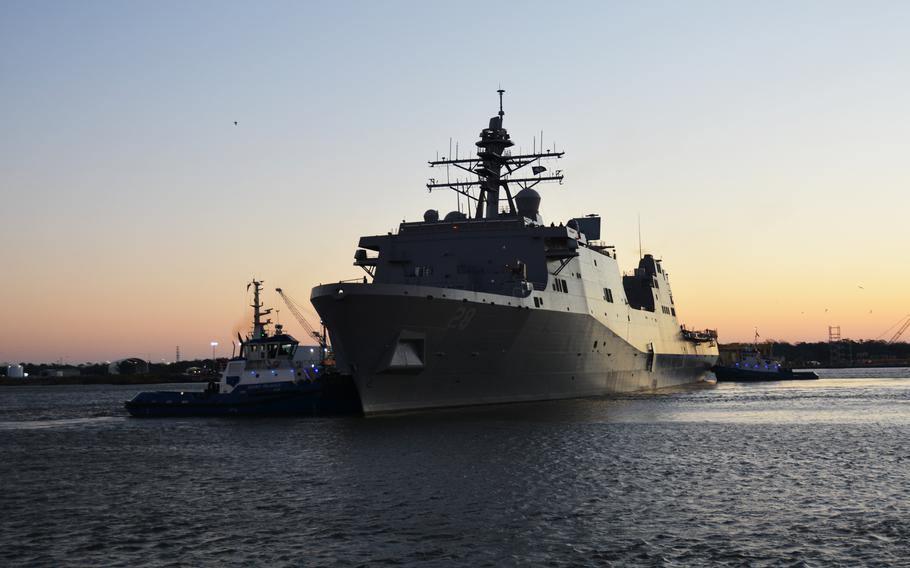 The future USS Fort Lauderdale (LPD 28) departs Huntington Ingalls Shipyard in Pascagoula, Miss., Jan. 26, 2022, to conduct Acceptance Trials in the Gulf of Mexico. A commissioning ceremony to mark the ship’s entry into active service will be held at Port Everglades, Fort Lauderdale, Fla., on July 30 at 10 a.m. in an invitation-only event. (Dustin Knight/U.S. Navy)

(Tribune News Service) — Fort Lauderdale will soon have its own seaworthy baby: A namesake vessel manned by 400 sailors.

Built at a hefty price of $1.8 billion, the USS Fort Lauderdale is the Navy’s first ship named for the city known as the “Yachting Capital of the World.”

A commissioning ceremony to mark the ship’s entry into active service will be held at Port Everglades on July 30 at 10 a.m. in an invitation-only event.

Fort Lauderdale Mayor Dean Trantalis, who attended the ship’s christening in Mississippi last year, says he will most certainly be there for the commissioning.

“It acknowledges the long history our community has had with the Navy,” he said Monday. “Being the host of Fleet Week for many years, our community has developed a rapport with our men and women in service over the years.”

The USS Fort Lauderdale, a San Antonio-class amphibious transport dock ship, was built at a shipyard in Pascagoula, Miss.

The 684-foot ship weighs more than 7,000 tons and sits about 12 stories above the water line. Big enough to transport 800 Marines and landing craft, the ship was built for amphibious assaults, special operations and expeditionary warfare missions.

Other San Antonio-class ships have also been named after U.S. cities, including New York, New Orleans and San Diego.

“No matter how many times you attack us, we always come back,” Secretary of the Navy Ray Mabus said during the commissioning ceremony in Manhattan. “America always comes back. That’s what this ship represents.”

The New York ship’s motto is “Strength forged through sacrifice. Never forget.” The motto of the USS Fort Lauderdale is “Together We Fight.”

After the commissioning ceremony in July, the ship will head to its home port in Norfolk, Va.