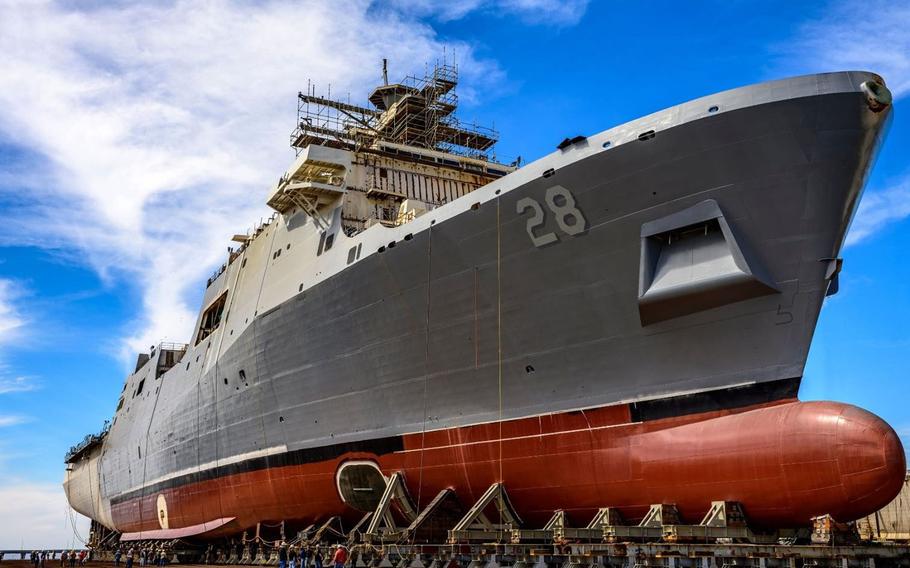 The amphibious transport dock ship USS Fort Lauderdale (LPD 28) was put through its paces in the Gulf of Mexico recently and the ship passed the builder’s trials with flying colors. (Huntington Ingalls Industries Facebook)

PASCAGOULA, Miss. (Tribune News Service) — The amphibious transport dock ship USS Fort Lauderdale (LPD 28) was put through its paces in the Gulf of Mexico recently and the ship passed the builder’s trials with flying colors.

Builder’s trials, as the name implies, are at-sea tests conducted by the shipyard in advance of the later acceptance trials with representatives of the U.S. Navy.

“Shipbuilding is about teamwork,” said Steve Sloan, LPD program manager for Ingalls. “Our shipbuilders work as a team with our Navy partners to make these ships ready to join the fleet. The success we achieved this week will propel us into a strong finish as we prepare for acceptance trials later this year.

“We are proud of the work our shipbuilders have accomplished so far and look forward to finishing strong.”

The Fort Lauderdale is scheduled to be the 12th of the San Antonio (LPD 17) class delivered by the Pascagoula shipyard, with two more — Richard M. McCool (LPD 29) and Harrisburg (LPD 30) — under construction. Ingalls has also been awarded a $1.4 billion contract for construction of as-yet unnamed LPD 31.

The 208.5-foot ship’s primary mission is to embark, transport and land U.S. Marine Corps landing forces in a variety of expeditionary and special operations missions, while providing command and control, communications connectivity and medical services.

LPD’s have a top speed of 22 knots and feature a crew of 32 officers, 34 non-commissioned officers (NCO) and 330 enlisted men.

Fort Lauderdale was christened in April, with Meredith Berger, Assistant Secretary of the Navy for Energy, Installations and Environment, serving as ship’s sponsor. A former Deputy Chief of Staff for the Department of the Navy, Berger began her career in public service in the Chief Financial Officer’s department for the State of Florida.

Fort Lauderdale is named in honor of the Florida city, which has a long history with the U.S. military, including the Seminole Wars and Naval Air Station Fort Lauderdale, which trained thousands of pilots beginning with World War II, including former U.S. President George H.W. Bush.