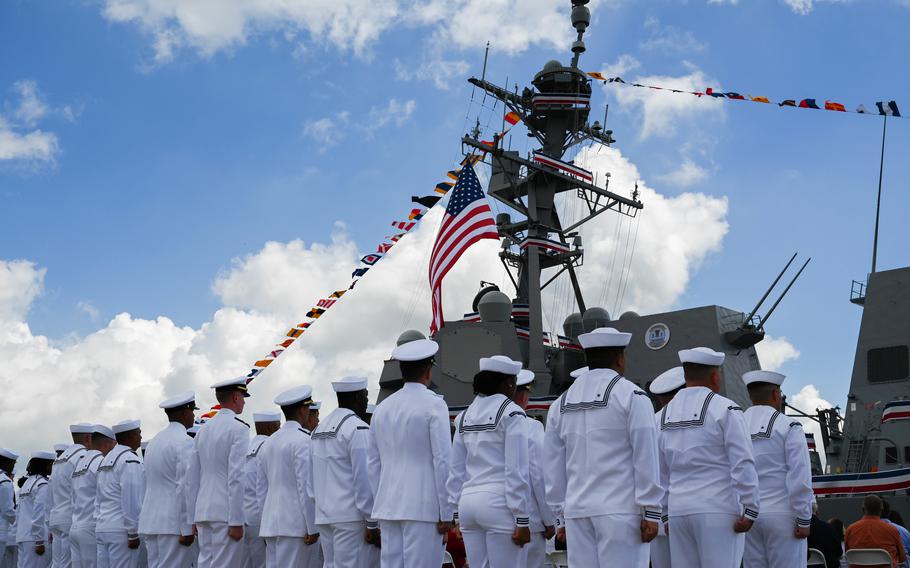 Serving two combat tours — Korea in 1953 and Vietnam in 1968 — Petersen flew more than 350 combat missions and had over 4,000 hours in multiple fighter and attack aircraft.

Petersen died in August 2015 at the age of 83. He is buried in Arlington National Cemetery. 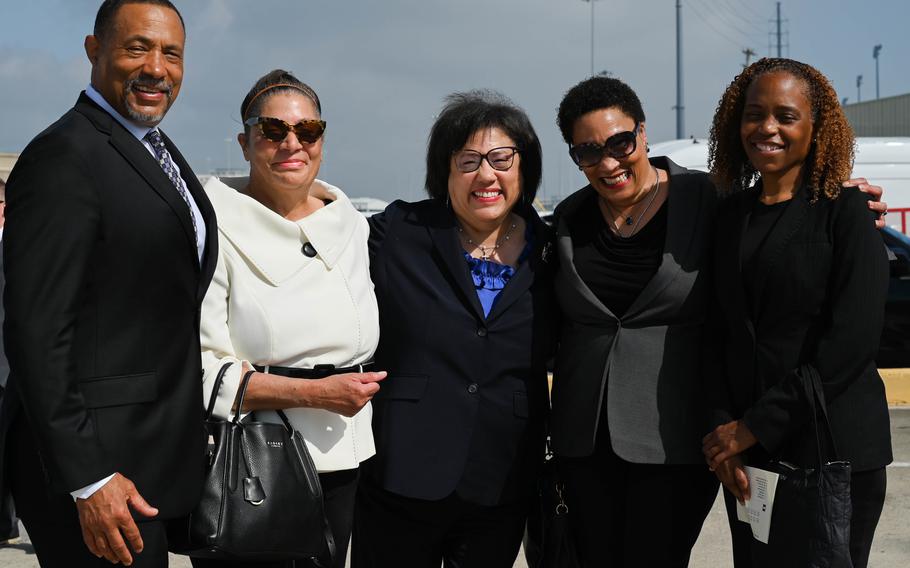 The Petersen family stands together moments before the commissioning of the USS Frank E. Petersen Jr. in Charleston, S.C., May 14, 2022. Lt. General Petersen served in Korea and Vietnam during his career. (Dylon Grasso/U.S. Marine Corps)

Saturday’s keynote speaker was Carlos Campbell, former Navy aviator and assistant Secretary of Commerce for Economic Development, who served alongside Petersen and spoke of Petersen’s courage and dedication.

“He received a (fragment) wound, he was treated in the field, and returned to combat,” Campbell recalled of Petersen.

“It is fitting that a name synonymous with service and sacrifice be emblazoned on the steel of this American warship,” said Chief of Naval Operations Adm. Mike Gilday. “Sailors aboard this mighty warship will deploy wherever, whenever needed, with General Petersen’s fighting spirit and tenacity, for generations to come.”

Marine Corps Commandant Gen. David Berger was also among the dignitaries on hand.

“General Petersen was a man of many firsts,” Berger said. “There’s a saying that ships take on the characteristics of their namesakes, and if that’s true, then God help any adversary to ever confronts the Frank E. Petersen Jr.” The color guard presents the colors during the commissioning of the USS Frank E. Petersen Jr. in Charleston, S.C., May 14, 2022. (Dylon Grasso/U.S. Marine Corps)

Members of Petersen’s family were on hand for the christening, with his daughter, Gayle Petersen, speaking for the family and paying tribute to one special person in her father’s life.

“We would not be having this ceremony today if not for a gentleman named Robert Adams,” Gayle Petersen said. “When my dad was shot down in Vietnam, he was rescued by Robert Adams.”

She also paid tribute to the Ingalls shipbuilders who brought DDG 121 to life.

“I would like to thank all who had a hand in building this ship, from stem to stern.”