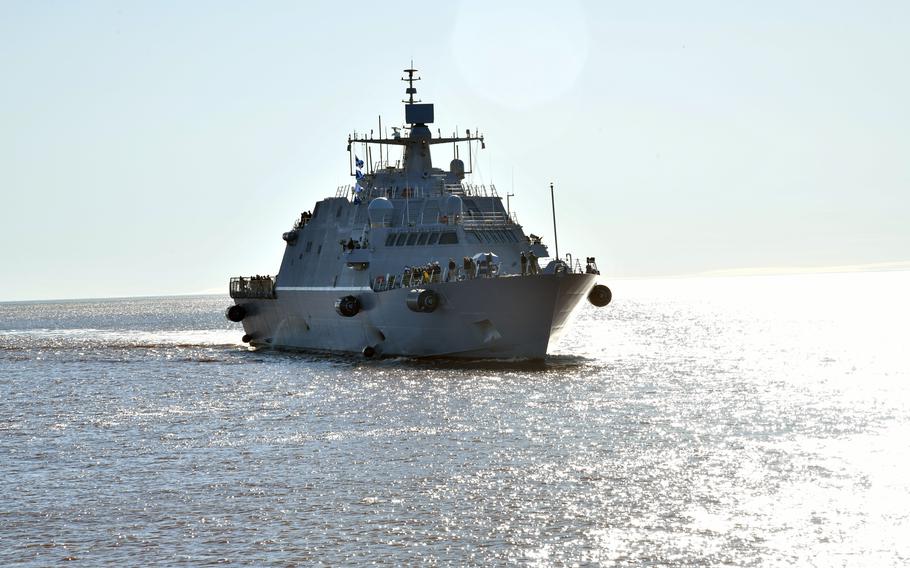 The future USS Minneapolis-Saint Paul (PCU LCS-21) arrives in Duluth, Minn., on May 16, 2022. PCU LCS-21 is a United States Navy Freedom-class littoral combat ship that will be commissioned in the Port of Duluth on Saturday, May 21, 2022. (Audra Flanagan/U.S. Air National Guard)

SAULT STE. MARIE, Mich. (Tribune News Service) — The Soo Locks had a special visitor pass through over the weekend.

According to photos shared by the U.S. Army Corps of Engineers, the USS Minneapolis-Saint Paul passed through the Poe Lock on Saturday.

The Naval Littoral Combat Ship (LCS) built by Marinette Marine out of Marinette, Wis., arrived in Duluth, where it will be commissioned on May 21. The ship was christened in Wisconsin’s Menominee River in June of 2019.

“The christening of the future USS Minneapolis-Saint Paul marks an important step toward this great ship’s entry into the fleet,” said Secretary of the Navy Richard V. Spencer in 2019.

“The dedication and skilled work of our industry partners have ensured this ship will represent the great city of Minneapolis-Saint Paul and serve of our Navy and Marine Corps team for decades to come.”

Once commissioned, the USS Minneapolis-Saint Paul will operate mostly near shore, combating asymmetric “anti-access” threats such as mines, quiet diesel submarines and fast surface craft, while also being capable of open-ocean operation.

For that reason, the inside of the LCS Freedom class vessels are 40% open, so they can be reconfigured in a number of ways to support a variety of missions.

This is the second ship named for the Twin Cities. The first was a Los Angeles-class attack submarine that served from 1984 to 2008. Two U.S. Navy ships have been named for Minneapolis and two for St. Paul.