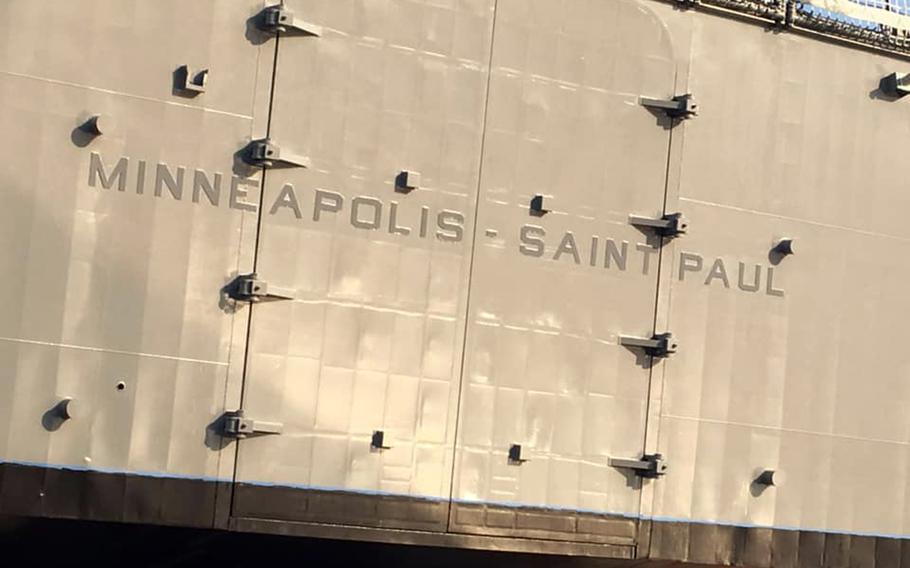 The Navy plans to christen its newest littoral combat ship, the USS Minneapolis-Saint Paul, during a ceremony Saturday at Fincantieri Marinette Marine in Marinette, Wis.

Jodi Greene, deputy undersecretary of the Navy, the ship’s sponsor, is expected to follow tradition and shatter a bottle of sparkling wine across its bow. Rep. Betty McCollum, D-Minn., will deliver the principal address.

“The christening of the future USS Minneapolis-Saint Paul marks an important step toward this great ship’s entry into the fleet,” Secretary of the Navy Richard Spencer said in a Navy statement.

The Freedom-class ship built by Lockheed Martin can carry the MQ-8B Fire Scout unmanned autonomous helicopter or the MH-60R/S Seahawk helicopter. At 388-feet-long it’s capable of better than 40 knots, or 46 mph, according to the Navy.

The littoral combat ships are built to be rapid, nimble and operate near the shore and in the open ocean. They are designed to deal with threats like fast surface craft, quiet diesel submarines and mines, according to the Navy statement.

“The dedication and skilled work of our industry partners have ensured this ship will represent the great city of Minneapolis-Saint Paul and serve our Navy and Marine Corps team for decades to come,” Spencer said in the statement.

The ship will be homeported at Naval Station Mayport in Jacksonville, Fla., according to a tweet posted in August by Florida’s Sen. Marco Rubio.

“Mayport will be the principal East Coast home for the Navy’s newest class of warships, the Littoral Combat Ships,” he wrote. “The Sunshine State prides itself on its long history of support for our Navy’s ships and sailors, and we remain committed to that special relationship.”

This will be the second naval vessel to carry the name of Minnesota’s Twin Cities. The first USS Minneapolis-Saint Paul was a Los Angeles-class fast attack submarine in service from 1984 to 2008.