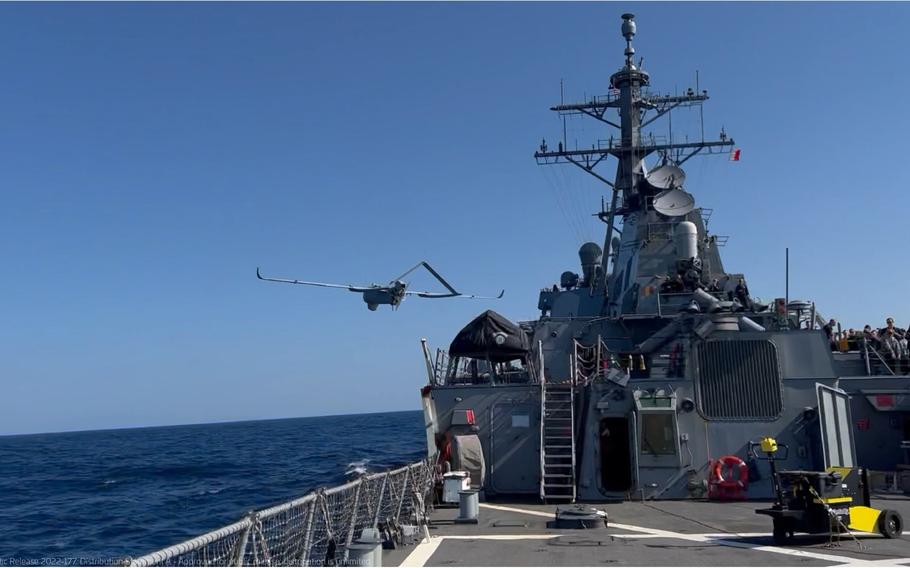 YOKOSUKA NAVAL BASE, Japan – The U.S. Navy tried out a new drone system recently aboard one of its older destroyers, a project that, if successful, could provide low impact, unmanned air support for the warship.

The Aerosonde Small Unmanned Aircraft System, property of defense contractor Textron, Inc., successfully completed its first flight on April 4 from the deck of the guided-missile destroyer USS Higgins, according to a company news release that day.

It was unclear Friday where the flight took place. The Higgins, homeported at Yokosuka, joined the 7th Fleet in August, according to the Navy.

The Aerosonde was installed in February and is expected to remain aboard the Higgins through October, with an option for an extension, 7th Fleet spokesman Lt. Mark Langford told Stars and Stripes in an email April 21.

The Higgins, an Arleigh Burke Flight II variant commissioned 23 years ago, lacks the onboard hangar built into later, Flight IIA and Flight III variants to fully accommodate MH-60 Seahawk helicopters. The Navy is using the Aerosonde, which has a relatively small footprint, to fill that gap.

“The Aerosonde UAS provides an aerial component without needing to launch a manned helicopter,” Langford said. “Its sensor suite is personalized for the [destroyer] and its planned missions, and [it] greatly extends visual or radar horizon sensor ranges beyond the ship’s organic capabilities.” 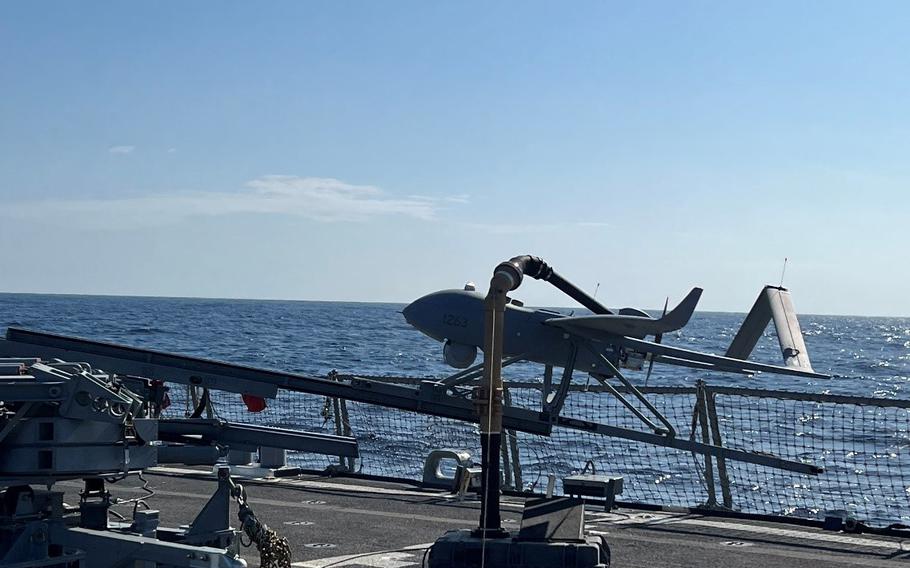 The Aerosonde has a 12-foot wingspan and weighs 80 pounds, according to Textron’s website. It has a range of 75 nautical miles, can stay aloft 14 hours, fly at a maximum 65 knots and carry up to 20 pounds.

A two-person team can launch the drone in under an hour; it’s powered by the same fuel that Seahawk helicopters use, Textron spokeswoman Susan Benhoff told Stars and Stripes.

“When you see these systems operate in collaboration with other manned and unmanned systems you begin to see their true power and potential,” she said in an April 21 email. “We have already demonstrated that air, land and sea unmanned systems can team with each other, extending range beyond line of sight or allowing for operations over the horizon line.”

Private contractors operate the system is under a fee-for-services model, which Benhoff said gives flexibility to both the Navy and Textron.

Only the Higgins has the Aerosonde right now, but a second drone may deploy later this year, probably on another 7th Fleet vessel, Benhoff said.

Textron also plans to field another version of the system that’s capable of vertical takeoff and landing called the Aerosonde Hybrid Quad UAS, she said.