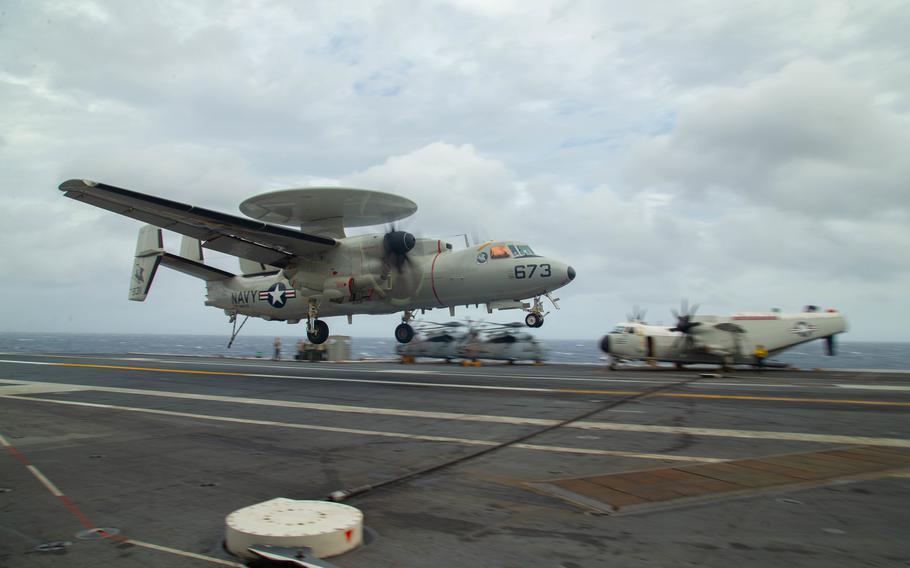 An E-2D Advanced Hawkeye assigned to the VAW-120 squadron lands on the USS Gerald R. Ford’s flight deck in 2020 while underway in the Atlantic Ocean. One of the unit’s E-2Ds crashed on March 30, 2022, during routine flight operations off the coast of Virginia. (Zack Guth/U.S. Navy)

Workers safely removed jet fuel over the weekend from a Navy aircraft that crashed in Virginia last week, killing one crew member and injuring two others.

The fuel was emptied Saturday from an E-2D Advanced Hawkeye that crashed near Wallops Island and the coastal town of Chincoteague while on routine operations, the Navy said in a statement.

The Navy didn’t specify how much fuel had been removed from the plane.

But measures were taken to ensure that “environmental safeguards (were) in place to protect the local ecosystem throughout the entirety of the defueling process,” Alan Kersnick, the Navy on-scene coordinator, said Sunday in the statement.

The Navy is working with local and state officials on salvage planning efforts, the statement said.

The Hawkeye was attached to VAW-120, the Greyhawks Command and Control Squadron. It crashed Wednesday, killing Lt. Hyrum Hanlon, a pilot. The crash remains under investigation.