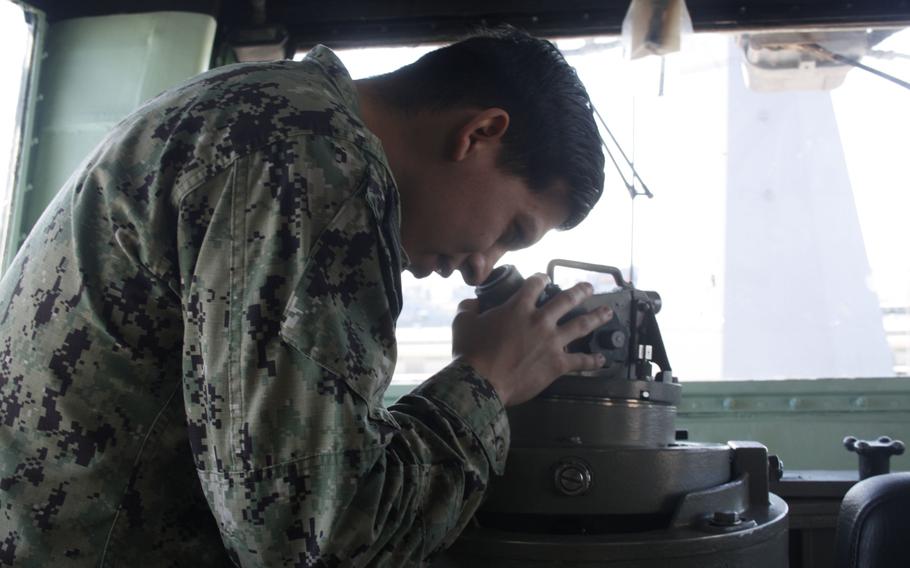 (Tribune News Service) — When your ship’s been in the shipyard for 16 months, it isn’t always easy to keep seafaring skills sharp.

Just ask Petty Officer 2nd Class Adrian Ortiz — and hear about some 200 sessions on computer simulators, each 6 to 7 hours long — drilling on his job as a quartermaster of the watch on USS Bataan.

When Bataan heads out to sea soon to begin its preparations for deployment, he’s going to be on post on the bridge for one of the most hectic, busy moves the 40,000 ton, 840-foot long amphibious assault ship ever makes.

“You’ve got to be cool, calm and collected,” he said.

Ortiz qualified as quartermaster of the watch during Bataan’s last deployment, sharpening the skills that mean the ship’s navigation officer will turn to him to double check math and mapping estimates.

“When the captain says we need to be in the op box at this time, the navigation officer gets busy calculating, and I do, too,” he said.

“We check each other, reconcile any differences, and so when he goes to the captain, he can be just that much more sure.”

It’s like a lot of conversations in the Navy — not just top down, but between members of a ship’s company who rely on one another, Ortiz said.

But to get there takes work. When Bataan pulled into the General Dynamics NASSCO-Norfolk shipyard, he like the rest of the crew was assigned new kinds of tasks — the ship’s “tiger teams” found themselves painting, replacing insulation and tackling other repairs to free shipyard workers to tackle other tasks in a major overhaul.

Ortiz pulled security duty. After six months of that, he headed over to the Afloat Training Group at Naval Station Norfolk for work on its various simulators.

In some, he gathered with sailors from the Bataan’s combat information center, working side by side with computer screens and a computer mouse.

At sea, quartermasters on the bridge team and CIC need to work closely — they all need to know exactly where the ship is at any point.

But as Ortiz helps the ship maneuver, keeping a watchful eye on the sea around him as well as the digital charts, sensors and gyros that tell him the Bataan’s position and where it is headed, the CIC team watches its charts and radar, sonar and other sensors to watch for any threats from planes, missiles, submarines or other out-of-eyesight ships.

“We do a lot of sets and reps,” he said, referring to the scenarios he and the CIC worked on.

At first, it can mean simply turning your head and talking to a CIC shipmate, who works several decks below when Bataan is at sea.

Eventually, he moved to a larger simulator, set up like a warship’s bridge, including a helmsman’s wheel, stations for the officer of the deck and conning officer and quartermaster.

A wall of screens simulates the view from the Bataan’s bridge, some six steep ladder-ways up from the ship’s main deck.

There, he and the CIC team, in a separate simulator, communicated through headsets, as they would at sea.

Messages have to be precise, and terms that may have slipped from memory while Bataan was dry-docked have to be drilled into memory. There can’t be any second guessing, he said.

“The first sessions were kind of rough,” Ortiz said.

But despite the months doing other tasks, things came back.

Back at the shipyard, working in an office on the barge the yard set up next to Bataan to house and feel and provide working spaces for the sailors, he spent time after his simulator sessions studying, practicing managing the digital charts of the vessel management system and reviewing manuals.

When shipyard workers weren’t doing “hot work” — welding — on the bridge, he’d climb the six ladders up and practice taking bearings with the Alidade telescopic sights on the bridge wing gyroscopes.

In the simulator, to mimic that key task — he’ll be taking bearings every few minutes when Bataan pulls away from pier 10 at Naval Station Norfolk — he had to swivel between two computer screens.

One showed navigation markers as seen from a distance, the other the view from a telescopic sight.

It was helpful just to practice with the real thing in the real way he’d be taking bearings, he said.

And, after those hours with the simulators, he’s ready to help take Bataan back to sea.

“It’ll be another day at the office,” he said.